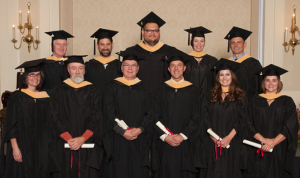 The IIRP Graduate School Class of 2015 is finding inspired new ways to take their passion for restorative practices out into the world, employing explicit elements of the practices to develop new ideas in their fields, workplaces and communities.

Their capstone projects, which they presented in a final paper and oral presentation, explored:

The commencement ceremony took place October 25, in Bethlehem, Pennsylvania. 2015 graduate David Knightly, Head Teacher of a technical school Diversified Occupations program, in Oxford Hills, Maine, spoke on behalf of his class. Below are excerpts from his speech:

We represent three countries, an array of careers and myriad stories. This group has provided examples of the power inherent in restorative practices when we learn about each other and with each other. We leave this place changed as a result of what we have learned and put into practice, but more important, because we have done it together. To all these pioneers, I offer my deep admiration and respect. Where some are still asking about that silly chicken crossing the road, this group is asking questions about the road itself. 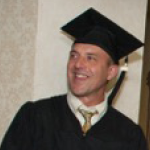 I wish to share with you a story of an adolescent boy who, like so many, floundered when he hit seventh grade. Apparently the move to a big school presented a crisis of identity for him as he tried to fit into various peer groups. Then came the day that he arrived at school to hear that a friend from his town had been hit by a car and killed. His school was no different from any other: The rumors flew. Things were said, then repeated to others. Tempers flared.

This young man responded to his grief, confusion and desire to fit in by hunting down another boy who had supposedly said something unkind about his friend. He found him and struck him in the face with his fist. He was caught, forced to apologize and put into the in-school suspension room for three days in a place where he was visible to those walking by in the hallway. He was a hero to some and a villain to others, but mainly he was confused about himself.

But years later, when this individual was asked what conversation he remembers the most, he said, “When I got home that day, my mother was waiting for me on the porch. She sat down beside me, hugged me, and asked, 'What happened?' ” The floodgates opened with that simple question; a question that many of you, like me, have come to ask on a daily basis, as we again and again begin a restorative dialogue.

I love words. I will sometimes meditate on a word that by its mere construction brings ideas together. Today I have chosen three words that illustrate our work. Those words are: reconciliation, restoration and redemption.

“Reconciliation” means the bringing back together of those who were estranged. Let's return to our middle school boy. His punishment, though arguably deserved, did little to address his shame or hold him responsible for his actions. He never felt released from the power of that story in his life.

But interestingly enough, some 20-plus years after his seventh grade year, he had a chance encounter with the individual whom he had assaulted. There in a public building, he – the offender – took responsibility for his actions to his victim. Tears flowed from the eyes of both grown men as that day was replayed and healing words were said. Both left, changed individuals. Fifteen years after that meeting, the offender, who stands before you today, began his study of restorative practices. The work of reconciliation is good work. When we bring together those who are estranged and facilitate a process that can heal, we do good work. To all of you, I say, keep up the work of reconciliation!

My second word is “restoration.” Restoration is the process of painstakingly returning something to its original state or better. I left my teaching career once and began to restore Volkswagens (VWs). You know, the old ones. Many of you have stories, I know. The thrill was not just to make them like the original, but often to make them just a little bit better. Maybe heat in a VW that actually works, something like that.

As practitioners of restorative work, we often facilitate and observe processes that take on a life of their own. Part of my work has been in the co-founding of a local restorative justice collaborative, which provides restorative conferences for juvenile justice cases. As facilitators we are trained to exhibit what I call a “facade of neutrality.” I say this because for those of you who also do this work, you know that if things go well, there is always a point, a lip-biting moment if you will, when we are personally moved by what we see happening before our very eyes: that point at which the accusers become the collaborators, when those who entered the room at odds become allies together for the good of their children.

My third and final word is “redemption”: the ascribing of new value to something deemed to be worthless. What was once cast off as worthless rubbish is given value. My fellow graduates, I would ask you to consider the pieces of your story that are painful, tragic and traumatic. How has your learning here redeemed those experiences?

Keep on redeeming what has been regarded as refuse. Keep trading it in for the gold that can purchase healing balm for others. Redeem away, my friends. Reconcile and Restore. Thank you.