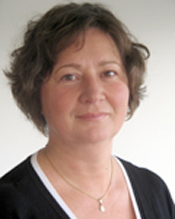 When they use restorative practices, professionals suddenly get back their self-esteem,” says Vidia Negrea, director of Community Service Foundation of Hungary (CSF Hungary), in Budapest. “They see how worthy their work can be.”

Negrea was appointed this month by the International Institute for Restorative Practices (IIRP) Board of Trustees as its newest member.

“I think of the IIRP as a restorative institution,” says Negrea. “The whole IIRP is a model of thinking and living in a restorative way. Even when the crises within politics and government make me very depressed, when I practice and people feel the effects of restorative practices, they start to regain their trust in themselves and the world.”

Negrea started her career in 1987 as a school teacher in Romania. In 1990 she immigrated to Hungary and began working as a clinical psychologist and youth worker. After five or six years working with juvenile offenders at the largest, oldest boys’ reformatory in eastern Europe, she started to think about the need for improvement: “I saw the system wasn’t working.”

Negrea stumbled upon restorative practices when she asked 100 students in her care to write an imaginary letter to their victims. The impact this had on offenders, and victims who were later contacted by some of the offenders, made Negrea realize she had a found a way to fulfill the needs of both parties and go far beyond simply administering punishment.

In 1999 Negrea received her first formal training in restorative practices during an IIRP professional development event in Hungary. She recognized that the restorative practices framework offered a way to build upon what she was learning in her own work. In 2000-2001 she spent a year doing hands-on training at the IIRP’s model programs for at-risk youth in Pennsylvania, USA.

On returning to Budapest, Negrea helped found CSF Hungary and directed the school for at-risk youth for three years.

Since 2006 she has been a lecturer at three universities in Budapest, teaching restorative practices to social workers, psychologists and teachers at the post-graduate level. In 2007 Negrea began working in the Hungarian justice system, training probation officers in the use of restorative practices.

In 2008 she began experimenting with FGDM (Family Group Decision Making) in prisons, particularly with inmates facing release, bringing together inmates with their families and support systems to help plan and implement a successful return to the community.

For the past three years Negrea has also worked as a psychologist with the Hungarian National Victim Support System. She continues to work with Balassagyarmat Prison to implement restorative practices at the institutional level. Currently, Negrea serves as Director for Central and Eastern Europe with IIRP Europe.

“Restorative practices are a very good tool for diminishing prejudices between people,” Negrea says. “I see this when I work in the prison, which is a very hierarchical institution. The relationships of people there — prisoners and guards — are very rigid and far from caring or respectful. Restorative practices make everyone feel different."

She concludes, “As a trustee, I hope I can contribute to the spread of the mission of the IIRP.”