The Movement Continues: The Third Commencement of the IIRP Graduate School 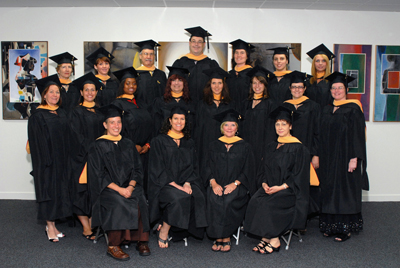 As IIRP president Ted Wachtel said in his opening remarks, the graduates are bringing restorative practices to a wide range of fields, including education, social services, behavioral health, counseling and criminal justice. But, said Wachtel, what he heard repeatedly, while participating in the graduates’ last circle during their final class, was that the practices were not only affecting the graduates’ approach to their work, but also to their personal lives and relationships. A degree in restorative practices, he heard several of them say, is not just an academic achievement, but it also represents a decision to participate in a movement to make the world a better place.

Following the traditional presentation of master’s hoods and diplomas, the graduates took part in a commencement tradition unique to the IIRP. Instead of a valedictorian speech, where only one graduate addresses the gathering, the IIRP’s ceremony includes a re-creation of a talking circle — a process used in IIRP classes and other restorative milieus. The circle gave all the graduates a chance to say whatever they wished upon reaching this important milestone in their lives.

All of the graduates’ stories are terrific. Here are just a few (unfortunately space does not permit us to tell them all), distilled from the commencement talking circle (and interviews):

Mary Schott, a preschool director from Belvidere, N.J., began by quoting Mahatma Gandhi: “Be the change you want to see in the world.” Despite their differences, she said, everyone in the IIRP class of 2010 was united in their desire to be the change in the world by promoting restorative interactions and making an impact with restorative practices. In her case, said Schott, she brought the practices to her preschool classrooms, resulting in “an amazing difference in behavior.”

Michele Snyder, a music therapist at an outpatient behavioral health clinic in Reading, Pa., said: “Working with clients and empowering them to make changes has been much more effective than doing things for them, as I used to do. Clients leave with smiles and direction, knowing there is hope for change and improvement. I never thought higher education would change me so much. I now take on more risks and challenges in my career than I ever thought I would.”

Paul Werrell, former chief juvenile probation officer of Lehigh County (Pa.) Court, currently an adjunct professor of criminal justice at Cedar Crest College, in Allentown, Pa., said, “Why am I here? I already have a master’s degree. I’m here because I believe in restorative practices. We are about to end the punitive era of juvenile justice and enter the restorative era. I plan to teach restorative practices in higher education and apply what I’ve learned at the IIRP in juvenile justice, because it works.”

Roxanne Atterholt, human services program specialist at New Castle Youth Development Center (a state juvenile detention center) near Pittsburgh, Pa., said, “I had been looking for a master’s program for some time, but criminal justice wasn’t right, and neither was social work. There has been a direct correlation between what I’ve learned in IIRP classes and what I do in my work. I began using circles after my very first class. I’ve learned how to work with staff and kids and really engage them. FGDM [family group decision making] changed the way I address and empower families. I’m also part of a statewide committee that’s addressing lethal violence in youth. I’m excited to be part of significant shift statewide — a commitment to doing things differently with kids.”

Marlene Ruby, an employability skills instructor at Career Link, in Allentown, Pa., helping people transition from welfare to the workforce, said of her fellow IIRP graduates: “We come together from diverse backgrounds, seeking ways to weave the common threads of restorative practices into a wonderful fabric and still honor that diversity. These are the people we hope will make a better world, as we create unity in diversity.” In her work, she said, she assists people from very diverse backgrounds, with different aspirations. Restorative practices, from daily talking circles to impromptu restorative circles when conflicts arise, have helped her build a supportive community among her clients, so that they can help each other attain their goals. 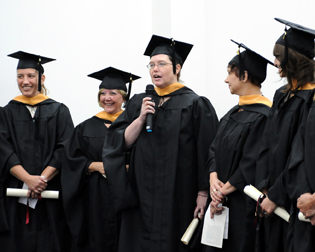 The graduates speak in a talking circle.Kate Shapero, an elementary school science teacher in the Philadelphia area, said: “As a teacher, I can tell you that teachers don’t realize they’re going to need restorative practices until they’ve been teaching for a few years. They think, ‘If I just make things interesting enough I can solve all the problems.’ After investing just two days here, I was hooked. Here, people listen and share. The best thing about IIRP classes has been the grounding, the safe haven to process what you’ve been trying out in the world. Everything I’ve learned here is connected to both actual practice and my personal life. I’m eternally grateful the IIRP came into my life.”

“You may know Baltimore for crabs, the Chesapeake Bay and the TV show ‘The Wire,’ which is about neighborhoods ravaged by drug activity,” said Dr. Berkeley. “My world includes those neighborhoods, including one called ‘Zombieland.’”

At City Springs Elementary School,14 years ago, before BCP became involved, the school was extremely chaotic, said Dr. Berkeley. Kids didn’t stay in class or even in the building but did as they pleased. At the beginning of the year BCP came on board, students learned new rules, rewards were put in place for following the rules, and everything improved.

But several years later, BCP staff realized that students behaved only if the adults were watching. Students hadn’t internalized the behavior. Then BCP heard about restorative practices: a way to teach kids how their actions affected their classroom, their school and their neighborhood. 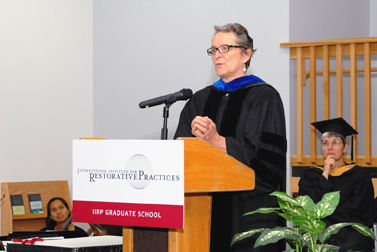 Dr. Muriel Berkeley gives the commencement address.She told a story about a middle school student, “Rob,” who had mercilessly teased and harassed another middle school student, “Carl,” for months. One day Carl couldn’t take it anymore and pushed Rob, who fell and hit his head, was knocked unconscious for a short time and was taken away in an ambulance. An inexperienced school police officer took Carl away and forced him to spend a night in jail.

A few days later, the school held a restorative circle with Carl, Rob, their extremely angry parents and some school staff. “I was nervous,” said Dr. Berkeley. “But through the circle, the parents apologized to each other and came together in support of their two boys.”

Dr. Berkeley concluded by addressing the IIRP class of 2010 directly: “That’s why you’ve been studying restorative practices. And boy, do we need you!”

Ted Wachtel then closed the proceedings of the third commencement of the IIRP: “the world’s first graduate school wholly dedicated to restorative practices!”