At the IIRP’s first participatory symposium: Turning The Tide: Bringing Restorative Practices to Schools, Organizations, Workplaces and Communities, 42 professionals came together to share and strategize about how to implement and sustain restorative practices in a wide range of settings. The symposium, held August 2-4, 2011, at the IIRP Graduate School in Bethlehem, Pennsylvania, USA, was also an opportunity for 14 students to earn graduate credit, doing additional online work. 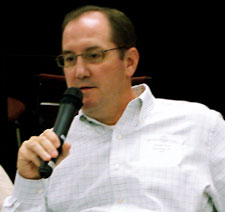 Roy said he began his career in school administration suspending many students daily. Eventually he realized that the punishment was futile: he was suspending the same students over and over again. Later he was instrumental in restorative practices implementation at two of the IIRP’s pilot public schools — Palisades and Springfield Township high schools, in Pennsylvania. School culture improved and discipline problems declined at both schools. (See “SaferSanerSchools: Transforming School Culture with Restorative Practices” www.iirp.edu/article_detail.php?article_id=NDI4.)

Roy related some objections to restorative practices he has heard from teachers and how he has responded to them.

Roy said that Bethlehem is ripe for restorative practices: A recent survey showed that less than 50 percent of the city’s high school students felt their school was safe. The challenge will be to convince staff that “We can’t expel our way to safer schools. We need to build positive relationships to get ourselves there.” He plans to employ the IIRP’s SaferSanerSchools Whole-School Change program: “It’s a comprehensive, ongoing model that covers everything we’ve tried to do in the past. We know that ‘once and done’ doesn’t work.” 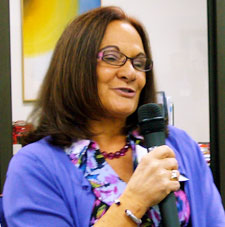 The second keynote speaker, Rhonda Richetta, principal of City Springs Elementary/Middle School, in Baltimore, Maryland, talked about the huge changes that have occurred at her school. When she arrived, City Springs, located in the middle of three housing projects, was a violent and angry place. When she learned about restorative practices and began implementation, at first the faculty revolted. To them it seemed they would send students to Richetta’s office, and she would just talk to them and send them back. “Where’s the punishment?” teachers wanted to know. With training and support, most teachers eventually got on board with the restorative approach, and the school started to improve.

Implementation started out piecemeal at City Springs, said Richetta. When she learned about the two-year Whole-School Change program, she jumped at it. Starting in fall 2010, the whole school staff was trained, including office and cafeteria workers and crossing guards; all loved feeling part of the school culture. Staff has taken the lead on implementation. (See “Restorative Practices: Whole-School Change to Build Safer, Saner School Communities.”)

City Springs has been transformed. Students now come to Richetta all the time, saying, “We need a circle.” In school year 2010-2011 there were zero fights; suspensions have decreased from 86 in 2008-2009 to nine in 2010-2011. As a result, learning can take place. Four years ago 26 percent of students were functioning at or above grade level; today that has increased to 80 percent. Parents have been affected, too. They take part in restorative processes at school, and Richetta has started holding circles with adults in the housing projects where the students live. At the next such circle, she plans to invite police to participate. These circles have the potential to become the foundation of a school-based “restorative zone” (see day two, afternoon breakout groups, below).

Later, in a problem-solving circle with criminal justice professionals, members discussed specific challenges and heard suggestions on how to address them.

To begin day two, Estelle MacDonald presented via Skype from Hull, UK. MacDonald is CEO of Hull Centre for Restorative Practices and headteacher (principal) at Collingwood Primary School, which she led from “special measures” to “outstanding.” She again told the story of how she began using restorative practices: “The community of the school was in crisis — there were disconnected relationships, people in conflict and little coherence or shared vision of how to move forward. ... We shared a compelling vision based on high challenge and high support and the use of circles in classes.” (See “My Restorative Journey and the Story of Hull, UK” www.iirp.edu/article_detail.php?article_id=NjMz.)

MacDonald discussed how she engaged with others in Hull to have a broader impact on the city. She offered informational meetings, one-day trainings to give educators tools — including circles and restorative questions — to use in their schools, and bimonthly meetings for headteachers. She met with Nigel Richardson, director of Children and Young People’s Services, who was instrumental in developing the idea that all youth in Hull should be dealt with restoratively, whether interacting with teachers, police, or social service or health care providers.

Many initiatives have furthered the goal of making Hull the first “restorative city.” In one project, each school identified five families in greatest need. A facilitator went to each home and ran proactive circles to discuss the families’ needs and ways the school and social services might support them.

The next keynote speaker, Muriel Berkeley, president and founder of the Baltimore Curriculum Project, which oversees several charter schools implementing restorative practices, presented on external challenges to change. Berkeley pointed out that City Springs, where Rhonda Richetta is principal, while having made huge strides, is still considered “failing” when measured by No Child Left Behind (NCLB) standards, a US law that mandates testing benchmarks.

Berkeley compared the US system to that in the UK, which allowed a school like Collingwood to go from “special measures” to “outstanding.” UK inspectors actually visit schools and can make allowances for positive change unrelated to test scores.

On day three, the breakout groups reported back to the full circle. Then Craig Adamson, executive director of Community Service Foundation and Buxmont Academy (CSF Buxmont), the IIRP’s model programs, which provide services for at-risk youth in eastern Pennsylvania, spoke about implementing and sustaining restorative practices from an organizational standpoint.

When Adamson began working at CSF Buxmont more than 15 years ago he was involved in the organization’s ongoing attempts to develop training for both new and veteran staff. This involved articulating and making explicit what processes worked best and the premises behind them — philosophies and techniques that would eventually be called restorative practices. Today CSF Buxmont trainings are spread out over many months so new employees can revisit the concepts and practices as they learn on-the-job. Also, staff share professional goals, strengths and weaknesses in ongoing team-building and personal development. He stressed, “It’s about consistency, sticking to it, and training, training, training.”

That afternoon, participants shared their experiences employing restorative practices. To end, everyone stated something they had learned, realized or were surprised by at the symposium. Jeff Farr, an IIRP graduate student and a teacher at Antietam Academy, a school for at-risk youth in Hagerstown, Maryland, said, “I learned that what I came here perceiving to be the problems of change are merely the process of change.”