The following is a guest post by Ian D. Marder, Ph.D. student, School of Law, University of Leeds, UK and founder, Community of Restorative Researchers.

In the United Kingdom, restorative approaches to crime, harm and conflict are currently the subject of unprecedented interest from a multitude of public service providers, including organizations in the criminal justice, housing, education and residential care sectors. In recent years, many such organizations have invested in the capacity to deliver restorative practices in-house. This in-house delivery capacity is usually created in one of two ways: by hiring or reassigning one or more members of staff to facilitate restorative practices full-time ("specialist" facilitators); or by authorizing and training existing staff (such as police officers, teachers, prison officers, or housing officers) to facilitate as an adjunct to their "normal" roles ("generalist" facilitators).

Recently, however, a growing number of organizations have been developing an alternative method of creating or increasing the capacity to deliver restorative practices locally by recruiting and training citizens from the surrounding area to act as caseworkers and facilitators on a voluntary basis. Previous incarnations of lay involvement in restorative practices in the UK have tended to involve volunteers as participants in the process, such as in Youth Offender Panels (YOPs). YOPs bring together volunteers, criminal justice professionals, young offenders and their guardians (and, when possible, their victims) in a quasi-restorative process, the purpose of which is to agree upon a program of interventions and activities to address the young person’s offending behavior (for more information on these, including the extent to which they adhere to restorative principles, please refer to academic research by Adam Crawford, Tim Newburn, and Fernanda Fonseca Rosenblatt). By contrast, the model of delivery I am describing here uses volunteers as a direct substitute for (or sometimes alongside) the public sector professionals who typically facilitate. 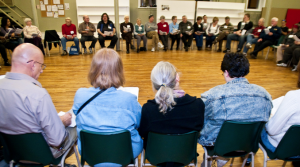 Photo by Michael Swan, Flickr Creative CommonsIn the UK, volunteer facilitation of restorative practices is currently being considered, planned or implemented in a number of contexts, most notably in the criminal justice process. This includes in prisons, such as HMP Leeds, and as part of the Crown Court pre-sentence RJ pilot projects taking place in ten areas, including Cardiff, Bristol, Croydon and Manchester. Volunteer practitioners are also being used by a growing number of city- or county-wide multiagency partnerships between local authorities, public agencies, third-sector/civil society organizations and social enterprises, such as Restorative Gloucestershire. Moreover, volunteer involvement in restorative practices delivery is well embedded in the third-sector in Northern Ireland, with organizations such as Northern Ireland Alternatives having long recruited, trained and coordinated non-professional restorative practitioners.

More recently, significant numbers of volunteer facilitators have been recruited and trained in Bradford, Darlington, Cheshire and other areas in England and Wales as part of "Community Justice Panels" or "Neighborhood Resolution Panels" (among other similarly titled schemes). The purpose of these panels is to deliver formal restorative conferences on referral from a variety of sources, including the police and other public agencies. They use a variety of models of delivery, including scripted and non-scripted restorative conferencing, lone- and co-facilitation, and direct and indirect forms of communication between victims and offenders. Depending on factors including their location and the organization from which their work is being coordinated, these panels now deliver a variety of formal restorative conferences, relating to both criminal and non-criminal incidents of varying levels of seriousness and complexity.

In the last year, I have been extremely fortunate to have had the opportunity to speak with a number of people directly involved in organizing or conducting voluntary facilitation in different parts of the UK. These conversations have left me with the impression that there is widespread appetite for some form of enhanced nationwide collaboration between groups of volunteers, from which stakeholders would greatly benefit.

One way of achieving this might be to establish a national association of volunteer facilitators.

The possible functions of an organization of this kind are numerous. It might include both acting as a community of support for its members and representing them on a national level, thereby emulating some of the great work done by Victim Support and the Association of Panel Members for their associated volunteers. It could coordinate international, national and regional events in order to facilitate the sharing of knowledge and experience. It could help to source and sustain funding for its members’ local organizations. It could commission independent research in order to evaluate the processes and outcomes of volunteer-led projects, determine best practice in the recruiting and training of volunteers, and examine the influence of local contexts on the participants’ needs and approaches to delivery. It would allow its members to engage collectively with the relevant national and international governmental and non-governmental actors, as well as with equivalent organizations in other jurisdictions. Finally, the organizing of volunteer facilitators on a national level could even enable the regional pooling or sharing of delivery capacity, thereby representing a practical step towards a national landscape in which the availability of restorative practices is no longer constrained by the location of the prospective participants.

Of course, the systematic, independent evaluation of restorative projects remains crucial, if we are to ensure that their safety, effectiveness and adherence to restorative principles are maximized. Academics are already engaged in the collection and analysis of both baseline and longitudinal data, and it is important to support the studies currently being proposed or conducted across the UK on volunteer involvement in facilitation, and on the respective roles of members of the community, public agencies and third-sector organizations in developing, regulating and delivering restorative practices more broadly. Of course, there is still considerable debate as to the most appropriate and effective models of delivery, particularly relating to the identity of facilitators. Hopefully, the results of the research currently being undertaken will add to the reliability and depth of the evidential basis needed to advance this conversation. But such research takes time, and the creation of an organization of the type described above is just one of a number of steps that volunteers and volunteer-led schemes can take to improve their processes in the interim.

The process of establishing such an organization could commence via the use of social media and other cost-free forms of communication. It would be possible to start by setting up a database of interested parties, before beginning discussions on the next steps and eventually arranging an inaugural event. This is not the sole possibility, far from it. I am only suggesting this route because it is the one I took when creating a restorative justice research network (the Community of Restorative Researchers) in the absence of funding and other resources. Yet, irrespective of how this is done, or of what form it takes, I have little doubt that enhancing communication and collaboration between local groups of volunteer facilitators would help to maximize the potential benefits derived from the involvement of volunteers in facilitating restorative practices, while also helping to ensure that the possible risks are minimized.