Edit Törzs, Ph.D., EFRJ Executive Director, praised the group, presenting the award at EFRJ's biannual conference, in Tirana, Albania, in June. She lauded Fellegi as "the driving force behind Foresee and chair of the EFRJ Research Committee for many years."

The Foresee team are researchers and scientists who are also practitioners, trainers and activists. Their work across Hungary and Europe shows "an amazing high level of competence and quality," added Törzs.

When Fellegi founded Foresee In 2008, she brought together gifted professionals in social work, mediation, law and sociology to solve society's most pressing issues. These include school exclusion, criminality, victim trauma, and offender rehabilitation and reintegration. With the four "Cs": conflict, communication, cohesion and community, "we can 'Foresee' a better future," states Fellegi. She has dedicated 10 years to empowering people to tell their life histories, helping them talk through and heal their trauma and bridge differences.

This may be especially crucial in Fellegi's home county of Hungary. "We are a nation that has suffered serious trauma in the last centuries," she observes. "There is suppressed shame going back generations, and urgent need to help people talk and reflect."

This need informs Foresee's work with SOS Children's Villages for orphaned and abandoned children. The project has guided young people to address conflict in a more conscious way and develop life skills.

One teenaged Roma girl had been at SOS since she was an infant. Her behavior was violent and hostile. Being enabled to share her life history of parental neglect, her feelings of shame and self-regret helped her realize that her hostile behavior was hurting herself more than anyone else. Like other SOS children empowered to tell their stories, the girl learned to be more conscious and wise about her decisions. But Fellegi insists, "We learn as much from them as they learn from us."

"We need to ask, then shut up and listen," she asserts. "Children will recognize their own weaknesses and areas for development and make commitments. As adults we need to love, pay attention to what they are saying, and stop preaching to them."

A project to prevent radicalization among prison inmates sought to identify signs and avert processes that lead to it. Research in five Hungarian prisons showed that "radicalization is a process at the end of a scale of escalated conflict and hidden tensions," Fellegi explains. The Foresee team conducted "life-path" interviews with inmates to facilitate their rehabilitation and reintegration. "The only way to deradicalize is with a reconciliation process," Fellegi maintains. "It's the only way inmates might be able to understand the way out of criminality or hatred." 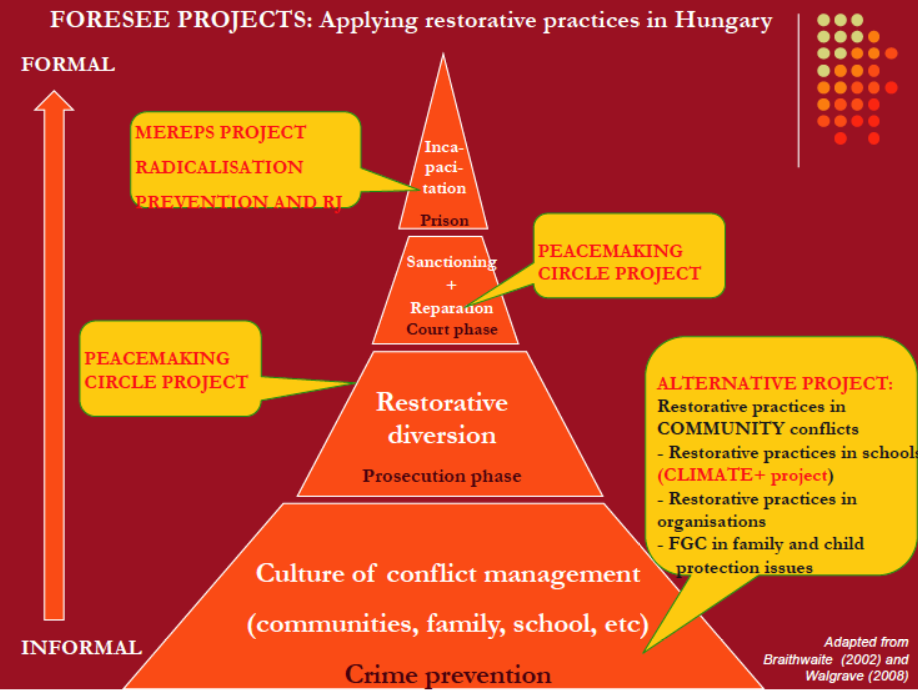 A four-year project brought restorative approaches to intercultural communities where Roma and non-Roma coexist. Fellegi was thrilled when village residents who had been trained "to talk and confront honestly and not swallow their different views" deeply absorbed what they had learned and spread it to surrounding communities.

Other projects have included a two-year initiative introducing peacemaking circles to address criminal, civil and community issues in European countries "with legal systems that are more rigid than those in the U.S .or the U.K.," reports Fellegi. From that project came Foresee's Peacemaking Circle Handbook.

On a macro level, Foresee projects address the current threat to democracy in Hungary and beyond, as well as the harm that results from people's inability to communicate.

Fellegi's mission and vision is to "give people courage to express how they feel and what they think. Then, we can sit down with each other, even with our disagreements." Her hopeful conclusion: "Each conversation, from one-on-one to society-level, can have its impact, and that can impact others."

Watch a video of Fellegi speaking about her work with Foresee Research Group.