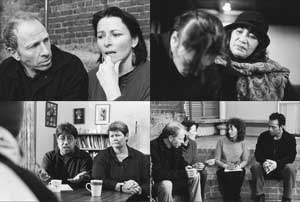 Dramatizations of conferences from a film made by the New Zealand Ministry of Justice in 2001 to train facilitators for the Courts PilotWhile it would be an exaggeration to say that restorative justice (RJ) has completely overtaken conventional forms of justice in New Zealand, RJ has made as much headway on the island nation as it has anywhere in the world. RJ processes—mainly conferencing, based on practices adopted from the Maori people of New Zealand, in which offenders, victims and their supporters meet face to face to repair the harm caused by crimes—are being implemented in the country of 4.1 million throughout the criminal justice system.

Unlike a court trial, where lawyers argue the law and impartial justice is meted out by juries and judges, conferencing puts those most affected by crime at the heart of the process. Victims, who are often unable to face or speak to offenders in court, are given a chance to express how they feel and have a say in the outcome.

Offenders who plead guilty are asked if they would like to participate in a conference with their victims and supporters. When an offender agrees, a trained facilitator meets with him or her to determine if a conference is appropriate. If a facilitator determines the offender is sincere, the court contacts the victim. If the victim is willing to participate, the facilitator will arrange the conference. After the conference, a report is written and submitted to the sentencing judge. Some courts have an RJ coordinator who oversees the process and ensures that the offender follows through with any agreements that are reached.

Judge David Carruthers, current chairman of the New Zealand Parole Board, describes himself as a “long-time enthusiastic supporter of restorative justice.” He believes conferences are important to handle offenders’ release into the community, particularly from the point of view of victims, who often continue to feel wounded by a crime and may fear reprisals.

Even in the most serious cases, including murder, there have been extraordinary results. Carruthers told a story of a boy who was abducted and murdered by a young man who committed the crime as a satanic cult rite. In prison, the murderer changed his behavior and became a Christian. “A remarkable restorative justice meeting was held with him and the family of the boy,” said Carruthers. The victim’s family had the chance to express their anger and sorrow. “At the end of the conference, the sister of the victim said, ‘I’ve always lived in fear about you. Now I don’t have fear any more. I wish you well.’”

Carruthers has been involved with RJ since the beginning of his 23-year career. He was active in early experiments with conferencing in cases of juvenile crime in the 1980s. Carruthers was also involved throughout the 1990s when volunteers and then formal groups began performing restorative conferences for adult crime, and he was chief judge of the Youth Court and a district court judge in the early 2000s during the “Courts Pilot,” which promoted and studied the effects of pre-sentencing conferences for moderately serious cases of adult crime in four of New Zealand’s 64 district courts.

Carruthers noted the visionary leadership of Judge Mick Brown, who straddled the Maori and Pakeha (non-Maori) worlds and was chief judge of the Youth Court in 1989 when family group conferencing largely replaced criminal proceedings for serious juvenile offenders. Carruthers also mentioned Judge Fred McElrea, who has spoken and published on RJ extensively in New Zealand, the U.S. and Europe.

Carruthers said that the Ministry of Justice is working to promote pilot programs and expand the use of RJ at three levels of the criminal justice system. First are police diversionary schemes, where conferencing is employed for low-level crimes when a guilty plea has been entered. In these, proceeding is diverted to a conferencing process and agreements there substitute for a court penalty. Second, conferencing may be used post-sentence, in prisons or as a condition of parole, as in the murder case Carruthers described. Finally, conferences are being conducted at the pre-sentencing stage, as in the Courts Pilot.

The Courts Pilot—which formally ran from 2001 to 2004, but which continues to operate in the four district courts today—helped provide evidence of the effectiveness of restorative justice to support the efforts by New Zealand’s Ministry of Justice to continue expanding RJ programs. The pilot, which examined 192 conferences between 2002 and 2003, indicated a four percent reduction in re-offending compared to expected outcomes—not statistically significant, though Carruthers said some have argued otherwise. However, the study did show a significant reduction in imprisonment rates and a remarkable rate of victim satisfaction. Ninety-six percent of offenders offered victims verbal apologies. Most victims said they felt involved in process outcomes and agreed with conference plans for offenders to repair harm. Most victims also believed offenders now understood how they felt and said their needs were met by the conferences. (See details here.)

“There is a popular belief that restorative justice is better for low-level offenses,” said Alison Hill, program manager for restorative justice in the Ministry of Justice. “However, we believe there is a bigger effect when there is more at stake.” Cases referred to conferences range from burglary, aggravated robbery and assault, to fraud, harassment and health and safety incidents. All crimes referred to the Courts Pilot had a threshold of at least two years maximum penalty. Manslaughter and murder were excluded, although death or injury as the result of careless driving were included. Sexual and family violence cases were also generally excluded.

Jessie Ruka-Amataiti, co-founder of the Te Ao Marama Whetu Trust, a social-service agency in the south Waikato region of New Zealand, described a conference she facilitated involving two young Maori men. The older, aged 23, was drinking and speeding, and responsible for an accident in which his 17-year-old passenger was killed. A conference was held with extended family and elders. The family of the driver talked about how the young man was so troubled he had attempted suicide. The young man cried uncontrollably during his turn, and finally begged forgiveness and said he’d do anything the victim’s family asked. The mother of the deceased accepted the driver’s remorse, suggested how he could make amends by doing good deeds for the community, and said he could visit her whenever he needed to. She instructed her family to hold no malice. The sentence included loss of license and other provisions, but no jail time.

RJ has been incorporated into the country’s codes of law, particularly three pieces of legislation enacted in 2002. The Sentencing Act requires judges to take the results of restorative processes conducted for adult offenders into account when issuing sentences, and the Parole Act requires “restorative justice outcomes be given due weight” in determining the terms of parole. The Victims’ Rights Act includes provisions that encourage facilitated meetings between victims and offenders. (For more on the history of RJ in New Zealand, see “Restorative Justice in New Zealand” by Helen Bowen and Jim Boyack: View here.)

The delivery of RJ in New Zealand involves cooperation between the government, courts and community social-service groups. “New Zealand is different from many other countries,” said Hill. “The Ministry of Justice contracts with community groups, mostly small charitable trusts. Instead of having the government come in, we want people from their local areas who know the community running the conferences.” Added Carruthers, “In New Zealand the RJ movement has grown from the community—often church groups, but also other good people. The government is doing what the people want.”

One challenge is to set consistent standards for RJ across the country. The ministry developed a five-day facilitator training program that was used to train new groups for the Courts Pilot. But the government doesn’t want to force any one method on groups that started 20 years or more ago and have developed their own variations in the ways they run conferences.

A first step toward developing flexible standards was the report “Restorative Justice in New Zealand Best Practice” (http://www.justice.govt.nz/publications/global-publications/r/restorative-justice-in-new-zealand-best-practice), which lists broad, general principles such as “conferences must be voluntary,” “victims and offenders should be central to the process,” and “offenders must be held accountable.” A second step is the launching of the Restorative Justice Centre for Research and Training at Auckland University of Technology, which aims to be a major training center for RJ facilitators and to perform research on what practices are most effective. Last, a national coalition of RJ service providers, Restorative Justice Aotearoa (the Maori word for New Zealand, meaning “Land of the Long, White Cloud”) was formed in 2005 to advocate as a single entity for fees and standards. Tim Clarke, chairman of RJA, said they currently have 32 member groups who contract with the Ministry of Justice. Its “Take Stock Project” aims to identify areas of the country that still have need for various services and help fill the gaps.

Said Carruthers, “RJ is offered as an option in almost every court throughout our small country.” But one thing is certain: “There is a lot more potential for the use of restorative justice.”