Improving Citizenship and Restoring Community: The 10th Conference of the International Institute for Restorative Practices

A plenary speech on day one of the conference, photography by Dávid VadóczBorbála Fellegi is a Ph.D. researcher at Eötvös Loránd (ELTE) University, Budapest, Hungary, in the field of social policy and criminology, with a special focus on the potential of restorative justice in criminal matters. She authored this report after attending the 10th IIRP International Conference.

“Participation, responsibility-taking, communication, community, caring, restoration, understanding, acceptance” –these concepts were the focus of the three-day long conference organized by the International Institute for Restorative Practices in cooperation with the Community Service Foundation of Hungary.

Several models–such as conferencing, circles, mediation and family group decision making–are being applied all over the world: in many countries of Europe, America, Asia, Australia and Africa.

All of these methods aim to provide constructive answers to conflicts occurring on the interpersonal, group and society level, ensuring participation for all those involved in and affected by a certain conflict, as well as empowering citizens to come to agreements by which both their needs and interests are reflected upon in a balanced way. In other words, the search for solutions is always with the people involved, not against or without them.

This international event, which took place in Budapest, Hungary, on November 7-9, 2007, became a meeting point for all kinds of people who are working according to the principles mentioned above. 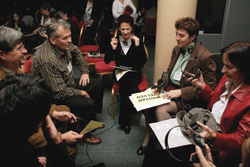 Conference participants were given headphones, as the plenary speeches were simultaneously translated into Hungarian or English

On the first day the presentations were in two languages—English and Hungarian. This provided an opportunity for more than 200 Hungarian professionals, representing child- and social-protection, justice and education systems, to participate in the event. As first presenters, Mária Herczog and Vidia Negrea shared reflections on the introduction of restorative justice in Hungary.

This was followed by presentations from Ted Wachtel and Paul McCold, who spoke, respectively, on the underlying theoretical framework and main research results of the restorative approach.

Terry O’Connell, a former police officer from Australia who has facilitated thousands of conferences, including murder cases, shared methodological experiences.

During the afternoon sessions Erzsébet Hatvani presented about the first experiences of Hungary’s newly introduced victim-offender mediation system. Mária Kerényi and Eniko Szucs, standing in for Gyöngyvér Magyar, gave overviews about the challenges and impact of restorative practices on the Hungarian education and child-protection systems, respectively.

All these topics were illustrated by highly informative films. Throughout the day, participants had the chance to express their own views by sitting in talking circles of six to eight.

The second and the third day of the conference was a real journey: More than 50 presentations and workshop discussions showed in what ways individuals, their communities and whole societies are dealing with their conflicts in different countries. Whether regarding families, schools, institutions, prisons or wars, the focus was always on finding ways to provide participatory decision-making, expressing emotions, creating and following rules together, restoring community bonds, reintegrating and forgiving. 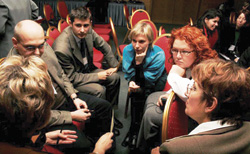 There were many opportunities for participants to meet in small circles to express their own views, photography by Dávid VadóczWhile writing down these thoughts I wonder: Isn’t there an essential need for all these principles in a strongly divided society such as Hungary? What is needed in our country to put all this theory into practice? What level of change can we implement without being dependent on others? What can we do ourselves, today?

The restorative approach is based on taking responsibility on a personal and active level: It says, no matter how small an individual commitment is, it is worth more than loud, visible and never-realized promises. And one thing is sure: There is always a step that is so small that one can take it without depending on others’ decisions. Consequently, no matter how small it is, there is no reason why we should not take at least one step, today, towards creating a more peaceful world. We have nothing to lose; the worst case is that everything remains the same as it used to be….