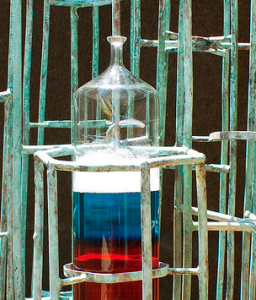 I noticed a story last week about a Florida teen who was expelled from school for a science experiment gone wrong. This case is garnering a lot of attention because the intent of the student was not only harmless, but also because this teen, Kiera Wilmot, was an otherwise model student. Now the ACLU is taking up the cause, which calls attention to the continuing criminalization of youth in schools and often dubbed the "School to Prison Pipeline." Rebecca McCray explains the story:

[Kiera] Wilmot, a student at Bartow High School in Polk County, Florida, mixed together household chemicals on school grounds to see what might happen. For this youthful experiment, she found herself arrested and charged as an adult when the concoction caused a minor explosion. The only casualty at the scene of this supposed crime? A plastic bottle.

Wilmot is regarded as an excellent student and has "never been in trouble, ever," according to her principal Ron Pritchard. At the urging of a fellow classmate, she combined toilet bowl cleaner and aluminum foil in an 8-ounce bottle. To her surprise, the top popped off and the concoction began to smoke, followed by a small explosion. Responding to a call by the assistant principal who observed the incident, a school resource officer took Wilmot into custody and delivered her to the [Assistant State Attorney]. The ASA charged Wilmot with two felonies and filed her case in adult court. Wilmot, who cooperated completely with both the assistant principal and the officer, said she did not mean to harm or frighten anyone. Nonetheless, the school automatically expelled her for violating the conduct code, forcing Wilmot to complete her high school education through an expulsion program.

My initial thought was that the punishment was out of all proportion to the misdeed. But I think the next paragraph is extremely telling. It's as if schools have become slaves to their own rules and regulations. McCray writes:

Following the charges, the Polk County School District released a statement unequivocally defending the choice to expel Wilmot: "In order to maintain a safe and orderly learning environment, we simply must uphold our code of conduct rules. We urge our parents to join us in conveying the message that there are consequences to actions. We will not compromise the safety and security of our students and staff." Thanks to the school's zero-tolerance approach, what it could have treated as a minor mishap deserving of stern but reasonable punishment has devolved into an expulsion and criminal offense that could both haunt Wilmot for the rest of her life.

The school district says it must show there are "consequences to actions." McCray advocates "stern but reasonable punishment." Restorative practices offers a third way that directly addresses both of these concerns.

Imagine if Wilmot had been immediately taken by the assistant principal to his office and asked to talk about what happened, what she was thinking before and after the explosion, and who she thinks was affected by her actions and how. The assistant principal, who apparently witnessed the incident, might have also talked candidly to her about how his feelings, what he thought when he witnessed the explosion, and the extremely awkward position he finds himself in to have to discipline this ordinarily great student.

Based on this conversation, the assistant principal might have decided what to do next. If it seemed that Wilmot was truly able to have a conversation and accept responsibility, that might suggest other possibilities. [Actually, this news report quotes the principal as saying, "She didn't run or try to hide the truth. We had a long conversation with her."] At this point why not include other students and teachers, who were nearby and impacted by the event. They could have formed a restorative circle  to explore how they were affected and talk the issue through. Wilmot and the group could also have been asked to consider what could be done next to repair the harm.

Consequences might have taken the form of a "stern punishment," but they might also have included things like writing letters of apology, performing some kind of community service, or taking other meaningful action to resolve the issue to everyone's satisfaction. Wilmot's friend who suggested she do this might have then been asked (or volunteered herself) to take some responsibility for her part in the incident, and to help to repair the harm.

Restorative practices like the ones I'm suggesting are being advocated as one alternative to ending the school to prison pipeline. In dramatic incidents like this one, responsive restorative practices are called for. On the other hand, I would end by saying that these practices work best when an entire school staff embodies a way of thinking and being that serves to build community throughout the school year. That way it is obvious how to handle situations like these when they arise.

The entire ACLU piece may be found at their "Blog of Rights" here.

More may be found about IIRP's Whole School Change program at safersanerschools.org.