"Best school in the universe" says key is restorative practices

Health Sciences High and Middle College, a public charter school based in San Diego, California, USA, is located in the City Heights neighborhood, one of the most diverse neighborhoods in the city. The high school was founded seven years ago and now has about 550 students; the middle school is in its first year with 130 students. About 60 percent of students are Hispanic, with high diversity among the remaining 40 percent. Students come from wealthy to very poor families and everything in between. One of the unique features of the school is that high school students conduct weekly internships, mostly at hospitals. Beginning about 3 1/2 years ago all staff have been systematically trained in restorative practices through the International Institute for Restorative Practices (IIRP) and have implemented restorative practices school-wide.

In this article, Jeff Bonine, principal of the middle school, and Dominique Smith, school social worker for the middle and high schools, with IIRP writer Joshua Wachtel, describe how restorative practices form an integral part of the structure that Health Sciences has established for its middle school program. The article includes concrete examples of the ways teachers and staff are using restorative practices and how it works.

Administrators and staff at Health Science High and Middle College are so excited about restorative practices that they are hosting an IIRP Basic Restorative Practices professional development event April 22-25, 2014, to spread the word about the practices to the public.

The staff sets the tone for the day, even before students arrive. Our entire staff starts each day in a circle, our “Morning Meeting.” We discuss the events of the day, areas of celebration, areas of need and concern, and we highlight students who may be struggling socially, emotionally or academically. It allows the entire staff to get on the same page and figure out which adults can help the students who are struggling most. This practice alone has made our entire staff more proactive because if everyone knows what is going on with a struggling student, then we can approach that student in a very different way than if we were in the dark. 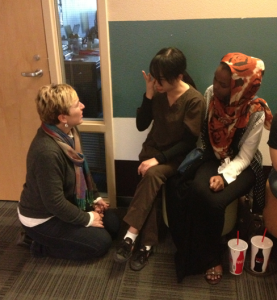 During a small impromptu conference a teacher kneels on the floor to help make a positive, respectful connection.We have become very good at check-ins and use them frequently in all our classes. This could be as simple as asking kids on Monday to share something about their weekend, or to talk about any worries or concerns they might have the day before a long break. We also try to integrate circles with class content, so after a reading the teacher might ask kids to go around the circle sharing what they learned. These circles, in addition to helping kids get to know one another and explore course content, also work as a type of check-in. If a teacher notices that a student has an attitude or something seems wrong in their voice, they talk to the student later to learn if there is something happening and try to help.

Routinely we also use a restorative practices framework to respond when something goes wrong, formally through the use of circles, and less formally with small impromptu conferences. Asking a struggling or defiant student “what’s wrong?” in a one-on-one setting can lead to a positive conversation, while calling that same student out in front of their peers can blow up in your face. We really focus on how we talk to kids, how we approach them and the importance of the language we use with them.

We had a new student who came to our school this year, and he was influenced by an adult that lived in his complex to steal several iPads from our school. Over the course of a week he devised a well-calculated plan to steal them from his English teacher’s classroom one day after school. To do this he talked another student from our school into helping him. This other student was to be the lookout during the theft. The boys initiated the plan and stole several iPads, the teacher’s cell phone and her personal laptop. During our investigation we found out who stole the iPads and which student had given up the codes to the locked iPad cart. 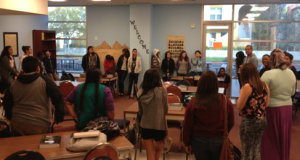 In this classroom circle students stand to accommodate the room's limitations.The student who gave away the codes and let the other student into the building had great relationships with the staff; the guilt overwhelmed him and he confessed what happened. As a result of his actions he asked to have a restorative conference to give back to the school.

He took part in a fishbowl circle, a special type of circle within a circle that is especially useful with a large group of people. The student, a supporter and two staff members, including the one whose things were stolen, sat in the middle. The rest of the staff of around 50 people sat outside the circle and got to enter the circle to talk briefly when they had something to add to the discussion. This process took over an hour and a half. There was raw emotion with many teachers expressing their feelings of not trusting the boy anymore and the discomfort they felt in his presence, but they also expressed how impressed they were to have him take accountability for his actions. During the process the student asked for forgiveness. He also asked to give back by being a mentor for the younger students and to be allowed to share his story. He said he wanted to work with teachers to build his relationships back and not to let his hurtful actions define him.

In another situation, students who had been caught smoking asked for their own circle. We thought we had fully dealt with the matter by holding meetings with each student and their parents independently. The students apologized to their teachers and agreed to a behavior contract, which has worked well. But it turned out the students still had some misunderstandings with each other and had continued to argue about who received more blame and punishment than the others. They seemed to think there was something unfair about the outcome. They asked that we help facilitate a circle so they could clear up their misunderstandings and restore their relationships. They had a chance to express their concerns, and staff helped to clarify the details. When they realized they had all been treated the same, it cleared the air and they resumed their friendly relationships. In fact, since the circle we’ve noticed the boys seem to have matured and are making better decisions in their general behavior.

Restorative practices has become a cornerstone of the work we do every day. It's the piece that has helped us become so successful both socially and academically. When our students feel safe, respected, paid attention to and loved, they're able to really focus on school work. We've see the results in our improved test scores and graduation rates, and we see it on a daily basis in the way kids interact with one another and with their teachers. Restorative practices is the foundation for what we do.

Jeff Bonine is principal of Health Science High and Middle College, a public charter school based in San Diego, California, USA. He was part of the founding team for the high school seven years ago. He has been a biology teacher, served in an administrative role similar to an assistant principal in charge of organizing all student internships, and this year he was asked to be principal of the new middle school program. He has a Master in Education Leadership.

Dominique Smith has worked for San Diego Health Sciences Public Charter for five years. He began working in campus supervision in a security guard role. Through the positive relationships he established with students and the completion of a Master of Social Work, he now serves as school social worker for both the middle and high schools.