Baltimore students “circle up” to cope with unrest

When civil unrest erupted in Baltimore, MD, during the last week of April 2015, schools that had been implementing restorative practices all year employed talking circles to help students feel safe, heard and restored. Unlike their counterparts in many other schools in the city, these schools felt prepared to respond in a way that strengthened their school communities. 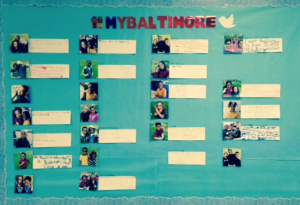 “It was a tense few days,” says Corey Basmajian, principal of Windsor Hills Elementary/Middle School, in West Baltimore, referring to the feeling not only in his school but throughout Baltimore.

In West Baltimore, protests had begun April 18 over the police’s treatment of Freddie Gray, who would die on April 19 of spinal injuries sustained during an arrest April 12. By Friday April 25, some of the protests had turned violent. The unrest peaked the night of Monday April 27, after Gray’s funeral. Baltimore City Schools responded by closing on Tuesday April 28. But when students returned to classes on Wednesday, everyone was anxious about how they would act in light of all the unrest taking place in the city.

“We’re in West Baltimore; not the heart of it, but that doesn’t mean we didn’t have kids and family members who were impacted,” says Basmajian.

On Tuesday, when schools were closed, Basmajian says he communicated by email with two of his school counselors and a school psychologist to establish a plan for Wednesday. Because the school had been implementing the International Institute for Restorative Practices SaferSanerSchools Whole-School Change program since the beginning of the school year, they looked to restorative practices and circles as the means to talk about what was happening. But before the students “circled up” the teachers held their own circle.

“At 7:30 on Wednesday morning, we had a teacher restorative circle to talk about how we were feeling — what our thoughts were,” says Basmajian. “For teachers who said, ‘I don’t know how to have this conversation,’ we deployed support staff to their classrooms.”

Basmajian received a lot of good feedback about the staff circle as a way to begin the day. Staff felt prepared to greet their classes and “better about the day and what could happen,” he says.

When students arrived, teachers held restorative circles in every single homeroom, from pre-K to 8th grade (age 4 to 15), and extra time was allotted for that to happen. Questions teachers used as prompts included things like "What happened?" "Why?" "What should happen now?" and "What can you do?"

Basmajian says, “We focused on the feelings of the students, which gave us some insight into how they personally felt about the events. There were comments about why people would do this to their community, comments around not trusting the police, particularly white cops. This was a good gauge into how students were feeling and also, for the little ones especially, reflected the types of things they were hearing at home and in their communities.”

Ben Johnson, a teacher at Maree G. Farring Elementary /Middle School, shared this video of his kindergarten class discussing the events in Baltimore during a restorative circle.

Meanwhile, across the city, other schools were trying to find their way. While Basmajian heard that teachers and administrators from other schools said they “didn’t feel prepared, didn’t feel connected and weren’t happy about the outcomes,” he says his teachers felt prepared to respond as a school community, that everyone was able to express themselves and that staff members were able to take care of each other as well as their students.

“If we did not have restorative practices, it would have been way harder to pull off what we did,” Basmajian says. “I would have had a plan, but it wouldn’t have been as effective as circles with the talking piece. I was really happy about how we handled the situation.”

A classroom circle at Renaissance Academy in West Baltimore.

At Renaissance Academy, a high school in West Baltimore just a few blocks from the epicenter of the protests, principal Nikkia Rowe says she wanted to give her students a chance to process what was happening all around them. Her staff held circles by grade level after lunch on the Wednesday schools reopened. Although many parents kept their children home that day, Rowe says about 30 to 40 students participated in each circle, along with administrators and other teachers and support staff.

Rowe says students are very familiar with circles because, as at Windsor Hills, the students have experienced proactive circles all during the school year as part of the Whole-School Change program. They started with a quick go-around, asking everyone to simply say one word to describe how they were feeling. Many staff and students, according to Rowe, said they felt “confused” and “disappointed.”

When staff then asked students to talk about “What did you see? What did you hear? and What do you know?” Rowe says in the circle she attended it “opened Pandora’s box.” Although some staff expressed concerns about the civil unrest, Rose says students focused more on the ongoing harm they experienced day to day in their neighborhood.

Students commented on all the vacant houses they see, the lack of places to get fresh fruit and vegetables and the antiquated state of their schoolhouse. They also expressed fear of police brutality for themselves, their families, their friends and their neighbors. One dismayed student said, “Do you realize that half the kids here haven’t had breakfast this morning?”

Rowe was proud that students felt safe enough in the circles to express how they really felt. “Restorative circles provided the safest platform for us to explore these issues,” she said. “It was probably the greatest tool we had to deal with the kind of situation where we had a very large number of children who were impacted. I feel like students were restored.”

Across Baltimore, in the Northeast part of the city, circles were being employed at another Whole-School Change school, Friendship Academy of Engineering and Technology (FAET) Middle/High School, grades 6 to 12 (ages 11 to 18).

“We had three cousins of Freddie Gray in the school,” explains principal Katrice Wiley. One-third of her students are from West Baltimore. “If I didn’t have restorative practices, we wouldn’t have made it,” says Wiley.

Early Wednesday morning, Wiley’s administrative team met to make a plan. They began the day with an announcement to the entire school using the school’s public address system. They praised their students, whom teachers and administrators believed had not participated in any of the city’s rioting, for their positive comments on social media. They also said they understood the issues the community was facing and knew that students needed to have a voice. The answer, once again, was circles.

All day, teachers led discussions with students during each of four 90-minute periods. During first period, students talked about “What happened?” as a prompt for their sequential go-arounds. In second period, teachers asked, “Why did it happen?” During third period, students were asked to talk about what they wanted to see happen as a result of everything that had occurred. Finally, during period four, teachers said, “Now that you know what you want to see happen, what actions, as a student, will you take now?”

Wiley says, “These basic questions caused such a good discussion.” Because students and teachers had been participating in circles all year, they knew what to expect.”

Some teachers ran circles on subsequent days, as well, and led other related activities, such as making videos and posters, taking photos, writing essays and making bulletin boards on the theme, “Black Lives Matter.”

“I have a pretty challenging group of young men and women,” says Wiley. “But they really did come together.”

Basmajian, of Windsor Hills, echoed the sentiments of all three principals when he credited first his staff, then restorative practices, for the positive outcomes experienced in his school community.

“In our darkest moments, in our most challenged times, we’re asked how we will react,” Basmajian says. “I’m very proud. Teachers felt so happy to be a part of a community where stuff like this is talked about and plans put in place. People felt supported.”

Wiley adds, “Everything is negative in the media about Baltimore. I wanted to share something positive.”