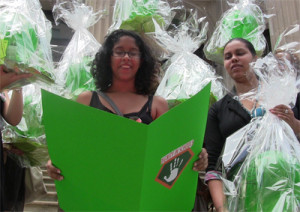 Student activists with Dignity in Schools Campaign Get Creative in How They Express Their Desire for Changes in New York City Schools Discipline PolicyLast week I posted the news that the Michigan State Board of Education was recommending an end to zero tolerance policies in public schools in the state. The trend toward reevaluating these harsh counterproductive policies – which require schools to administer certain kinds of punishments, especially detentions, suspensions and expulsions, as a sanctioned response to specific student discipline code violations – continues and if anything is gaining steam. Recent reports have shown that minority students are disproportionately affected by these policies and are responsible in part for the shift in thinking and policy. Here are clips from three stories reexamining zero tolerance policies across the US. In some cases restorative practices have been offered as an alternative to punitive approaches. The passages below are all quoted text with links to full stories underneath each passage.

In a unanimous preliminary vote, the State Board of Education emphasized that cutting down on expulsions and long-term suspensions would translate to more classroom time and higher achievement for students, the ultimate goal of the state's school system. The changes are subject to state review and public comment and will be put to a final vote next month.

via Md. board OKs overhaul of school discipline | WashingtonExaminer.com.

Georgia DOE Superintendent John Barge suggested zero tolerance actually pushes kids out of school. “Some of this zero tolerance helped schools with annual yearly progress,” he said, referring to the annual count of test scores that determine if a school is successful or not.

“If you miss ten or more consecutive days of school,” your scores no longer count for annual yearly progress (AYP) due to a counting rule that leaves out such truants.

Thus when schools feel pressured to rise in the AYP ranks, it may help to move along students who don’t score well.

“Zero tolerance in No Child Left Behind has actually left a lot of kids behind,” Barge said.

“Due to zero tolerance, we’re seeing a lot of kids brought in for nothing,” said Audrey Armistad, the acting associate superintendent of educational services for the state Department of Juvenile Justice. The DJJ runs its own separate school system.

“We think if we worked harder on relationships with schools we wouldn’t see this so much,” she admitted.

via "At a Georgia Conference, an All-Out Assault on Zero-Tolerance by Maggie Lee at Youth Today.

On June 19th, students and advocates from the Dignity in Schools Campaign- New York (DSC-NY) delivered over 2,300 post cards signed by New Yorkers committed to ending the NYC Department of Education’s (DOE) overreliance on school suspensions.

The post cards were wrapped up and bundled into eight large gift packages with bright green balloons. Each gift basket symbolized a different call for reforms needed to reshape the city’s overly punitive discipline code, including eliminating suspensions as a disciplinary response for minor misbehaviors in Levels 1-3 of the Code, mandating the use of positive guidance interventions in all schools, and eliminating long-term suspensions of more than 10 days.

Tuesday’s gift giving came on the final day on which the Department of Education was accepting testimonies regarding the proposed changes to the discipline code, set to be released in August.

via Dignity in Schools.