On Cotton Candy and Restorative Parenting

This piece, titled "Restorative practices at home: A method used in some schools seems a useful tool in mommy’s toolbox," by Aimee Lewis Strain appeared July 3, 2012 in the San Carlos Patch. Strain began wondering about restorative practices when she read an article about its application in San Francisco schools. Here, in this creative column, she talks about how she attempted to resolve a conflict with her 7-year-old son not with a conventional punishment but rather with a conversation modeled on what she'd been reading. Strain gave us permission to re-post the entire piece here on the Restorative Practices Blog. 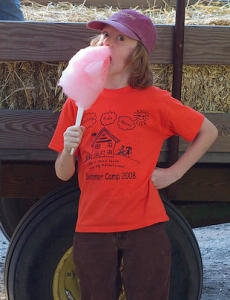 I was laughing with a friend the other night, telling the tale of how my son, after a long day at Gilroy Gardens, slapped me with the loudest “Whatever!” in history. This frustrated exclamation came after he failed to convince me to buy him his own bag of cotton candy on our way out of an amusement park.

My 7-and-a-half-year-old was asking for his own bag of cotton candy instead of having to share one $5 bag with his brother and sister. I had earlier agreed to buy them one to share. I told my son that I wasn’t planning to spend $15 on cotton candy and then waste another million dollars in patience to weigh through the meltdowns resulting from the pink and blue, sticky, puffy mess.

When I said no, my son’s words ricocheted from the mini carousel to the Banana Split ride and waned the deafening choo-choos produced by the park’s famed steam train.

“WHATEVER!” he said, kicking up his walk to a snappy march ahead of me. It took just two seconds for him to realize his lack of self-control and he coyly rejoined us and whispered a begrudging apology. I told him when we got home, he’d be sent to his room and that his dream of cotton candy would remain just that.

It seems this time of year, when the weather is warm and the schedules are loose, the egocentrics come out to play in my house. The more fun we have -- going to amusement parks, the zoo, the beach, the pool and the park – the more they expect and it certainly becomes visible when the word ‘no’ enters the conversation.

For a brief moment of calm in my house – one of about three last week – I was able to tackle one of my stacks of papers that grow in a hidden corner of my kitchen. In it, I found last month’s magazines, some coupons and a few newspaper clippings sent from my parents. One was about keeping blueberries fresh, another on how to cut an onion tear free. But one that spiked my interest most was on soaring expulsion rates at some San Francisco public schools and how a new interpersonal method is helping to decrease those numbers.

The article, written by Ted Wachtel, president of the International Institute for Restorative Practices, claims that punishments like expulsion and suspension are ineffective means of penalty because they do nothing to help the student eradicate his or her behavior or accept any accountability for poor decisions. Wachtel goes on to identify “restorative practices” as a way to better a school’s climate by interpersonal processes that empower people to create their own solutions, to resolve conflicts and better the overall community while taking responsibility for their actions.

The fundamental premise of restorative practices is that people are happier, more cooperative and productive, and more likely to make positive changes when those in authority do things with them, rather than to them or for them, according to Wachtel’s institute.

Maybe it’s the summer and watching my children grow accustomed to being together every day, but this whole idea of restorative practices really stuck with me. As I read in the aforementioned article, these practices are being employed in predominantly diverse or disadvantaged schools but the concepts it seems could and should be employed in more households.

After all, I am having to discipline my children daily for a range of things. They are learning and part of learning as young children is what not to do. Kids try out behaviors and make statements for a reaction, whether it be positive or negative.

But I couldn’t shake the idea that my son is being sent to his room for bad-mouthing me in the cotton candy incident. It seemed very much like suspension in a school environment. I am sending a 7-year-old to his room to reflect on his actions … or play with the million toys in there that line the walls? Suspension in a school environment might seem like a day off to some too.  Do these methods really force the individual to focus at all on the conflict? Do these methods offer any valid reflection?

We got home after our hour-long ride from Gilroy, my mind racing with this whole restorative practices idea. The three kids jumped out of the car – two from their cotton candy buzz -- and ran inside. My oldest son was nearing his room when I asked him to join me at the dining room table. He looked at me blankly and reminded me of his time out. (An easy form of punishment, I now realized.)

Instead of sending my son away for a 20-minute time out, I chose to talk to him about his actions. Following the model I briefly read about, together we identified new solutions, talked of his lack of cotton candy and then moved on. But it felt good. I actually feel like he understood why he was denied cotton candy and he felt it was a fair thing for me to do based on his behavior.

Will he hang another, “Whatever” – I am certain he will … and two other little copycats are waiting in the wings for their turns. But I might be a little less likely to send them away for an appropriated amount of time and instead try to help them not only see the problem in that behavior, but also how it makes someone else feel.

If my son truly listens to my new restorative approach to discipline, he might very well come out of the next amusement park with his own bag of cotton candy.