Restorative Practices as a Tool for Organizational Change: The Bessels Leigh School

The Bessels Leigh School, in Abingdon, Oxfordshire, England, a residential special school for boys with emotional and behavioral difficulties, age 11-16, has seen a remarkable change in culture, due to restorative practices.

Via restorative processes both formal and informal, the approximately 28 pupils are encouraged to express their emotions and feelings and consider those of others. In a very powerful way they are made aware of the consequences of their behavior and can recognize the harm that their actions have caused. In partnership with the IIRP and Real Justice UK and SaferSanerSchools UK, Bessels Leigh School is on track to become a demonstration school for restorative practices in the UK.

Established in 1964, Bessels Leigh School formerly served mostly pupils at the milder end of the behavioral spectrum. The philosophy was traditional, structured and authoritarian. Pupils and staff were generally happy, boundaries were not severely tested, pupil-staff relationships were mostly positive and staff turnover was low. 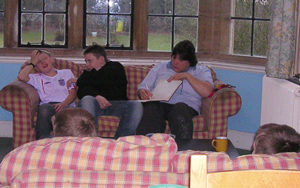 Bessels Leigh students participate in a circle meeting.About 12 years ago the client group began to change, due to the national political agenda, local government finances and a move to place the majority of youth in mainstream education.

Our disciplinary system, which had served well for so long, failed to meet the new challenges and actually contributed to the increasing problems.

We formerly used detentions at lunchtime or after school to punish minor behavioral infractions, a practice that was well-embedded and accepted. But some of the new more difficult clientele challenged this. Staff were determined to carry out the punishment and physical confrontations ensued.

The sense of community was eroding. Staff-pupil relationships changed to an “us and them” situation, and vandalism and antisocial behavior increased dramatically. Staff suffered rising levels of stress, and absenteeism and turnover increased. There had to be a better, more harmonious way of working.

In 2004, I was invited to attend a course run by the Restorative Practices Training Association (an association between Thames Valley Police and Real Justice UK) to become a restorative justice conference facilitator. The training provided a structure for many tenets that I feel should be central to all schools but are particularly necessary in the EBD (emotional and behavioral difficulty) sector.

After I delivered a day’s training to familiarize our staff with restorative principles, we slowly began introducing them in the school. We cherry-picked cases for restorative conferences-those that more or less guaranteed success or “no alternative” cases. We initiated practical projects involving the boys (such as planting a garden), so people could see the benefits.

Everything went well. A few staff came on board, but I didn’t know how to initiate a more comprehensive process that would include more and more staff.

In September 2005, Nicola Preston (of Real Justice UK and SaferSanerSchools UK) delivered the Introduction to Restorative Practices training to the school and residential unit staff. We were then able to put the theory into a practical context in terms of what we had achieved and what we wanted to do.

But the real turning point came when Nicola delivered the Using Circles Effectively training. Ever since I’d visited the Community Service Foundation and Buxmont Academy schools in America (IIRP sister organizations) and had seen circles, I’d been tempted to use them at Bessels Leigh, but I was afraid they wouldn’t work here, so I’d put it off. But after the circles training, the staff said, “We want to do this now.”

In these circles, we ask questions about the last 24 hours. “What has gone well?” brings out the positives. “What has not gone so well?” is followed by “What have you done to put right the harm?” “What are you doing this evening?” ends the circle on a positive note. A boy chairs the circle, and everyone has a chance to speak.

The boys, with staff’s help, established “norms,” rules for running circles and for acceptable and safe behavior. Since the boys set the norms-not interrupting, not fidgeting, paying attention, etc.-they’re more likely to respect them. New boys learn the norms from experienced boys; they’re also posted on the walls. The norms have served the school well and, with prompting, are being adhered to.

At first the boys were sensitive and didn’t like anybody, including their peers, bringing up issues, but they’ve become more accepting. We considered it a real milestone when the boys started passing comment about others, lending support and offering advice and help.

Another milestone occurred when a new boy enrolled in mid-year (as often happens). At his first circle meeting, before we got around to him, we made sure he saw how other boys were contributing, and to my amazement he just slotted right in. You could see him thinking, “Oh, it’s going to be my turn shortly.” We’ve since taken on several new boys, and they’ve also slotted right in. I attribute this to a change in our culture—“the way we do things here.”

The boys have made the circle process their own. One day a staff member’s camera went missing. We tried the usual methods to get information-nothing. Then a boy said to me, “I think we need a circle.” Previous circles had involved eight or nine boys in the residential units. A whole-school circle meant getting all 28 boys together in one place, which I thought might be too difficult to handle. But the boy thought it was a good idea, and he offered to chair it.

All the boys gathered in the front hall. The boy facilitated the circle in a very mature way. Every boy contributed responsibly. There was no silliness. It was a real eye-opener for some staff who thought that these processes might not work for our school. Later that day, the camera was miraculously found in a bush.

Circles are embedded in our culture. In January 2006 we changed the school timetable to hold classroom circles each morning in addition to the unit-based evening circles. We’ve changed the staff schedule so they hold circles at least every fortnight. We’ve trained the domestic and secretarial staff in restorative practices, as some were still being abrasive with the boys. Now they’re joining the circles.

Besides reintroducing a sense of community, restorative processes have greatly reduced property damage. We used to have a serious problem with boys breaking windows; one week we spent over £1,000 on windows. It had become the norm-get angry, break a window. Restorative practices virtually put an end to this.

For misdemeanors such as damage, boys and staff are involved in the restorative justice process, to attempt to repair harm done to the community. To make amends, boys have undertaken projects that benefit the whole school, including an “RJ Garden,” a formal barbecue area (which helped end a problem with ad hoc fire setting) and a go-kart track.

Detentions have been replaced by catch-up sessions. When misbehavior disrupts a classroom, staff explain what they want to achieve in lessons, why attendance is important for everyone and how catch-up sessions help make up for lost time. Now some boys attend catch-up sessions voluntarily, not because of misbehavior-perhaps they went to the dentist or whatever-but to get back on track.

The following two stories illustrate how culture change can happen:

A staff member was uneasy moving from the punitive (detention) system to the restorative (repairing harm). But when he became involved in the restorative justice process and worked with pupils to build a barbecue area, he realized that detention could never affect students in such a positive way.

Ten pupils worked on the RJ Garden project, yet only six were involved because of the restorative justice process; four were volunteers. Staff asked, “Is it punishment if others join in?” I answered, “Does it matter if the others are being positively engaged?”

Parents are also becoming involved in restorative processes; they’re attending restorative conferences and have been pleased with the process and its outcomes. It’s clear that boys are discussing the practices at home, as parents are asking us “What are these norms?” or “RP? What’s that about?” This spring we plan to offer restorative training for parents.

The evidence strongly suggests that restorative practices has had a very real, positive impact on our school. The change is clear to the staff and to the boys, and our journey has just begun.