CSF Buxmont: The Power of Community

Matt sat quietly in the small conference room, recounting a recent experience that was a watershed in his young life. Matt has attended the Community Service Foundation/Buxmont Academy (CSF Buxmont) school, in Trevose, Pennsylvania, USA, since October 2006, where emphasis on community problem-solving and support was key to his handling of this very challenging situation and his subsequent personal growth.

Dave provides support for his friend and fellow-CSF Buxmont student, Matt.“I’ve been through some hard times,” the 18-year-old began. “I’ve been arrested for possession of marijuana, and I was taking OxyContin [a prescription narcotic pain medication] for a year and a half. I finally realized that I have a family that cares and I went into outpatient [treatment], then inpatient, and I’ve been clean since.”

A shadow crossed Matt’s face as he talked about last month’s traumatic incident, when his 30-year-old brother’s liver was failing from alcohol abuse. He wasn’t expected to live; in fact, he was given last rites. “I was there, and it scared the hell out of me,” said Matt.

Such a crisis might well have triggered a relapse or worse in a young man like Matt. But according to Ed Krajewski, coordinator of CSF Buxmont’s Trevose Center, the way Matt’s fellow students responded to one of their own in need helped change this unfortunate incident into an opportunity and gave Matt just the boost he needed to turn his life around.

Everyone at CSF Buxmont knew what was happening that day. “We noticed in the morning that something wasn’t right with Matt,” said Krajewski. “He’s normally talkative, but he was very quiet. So he and I had an impromptu therapy session right there on the steps.”

Just as important, Matt’s fellow students rallied around him to provide their support.

CSF Buxmont operates eight schools, 16 foster group homes, and probation and drug-and-alcohol supervision programs for youth, which are demonstration programs of the International Institute for Restorative Practices. CSF has been helping youth like Matt to turn their lives around since 1977, through a supportive atmosphere of learning and intensive group and individual counseling, incorporating the principles of restorative practices.

“It was a real emotional day,” said his close friend Dave. “He was crying and on the phone a lot. So I went to him and said, ‘Hey, man, would you like a hug?’ and I hugged him.”

Hugging a peer isn’t something the 18-year-old would normally do, but Dave said it felt like the right thing. “He’s like my brother and I wanted to show him that I cared for him. He was so grateful.”

Sixteen-year-old Kay is another student who helped Matt that day, engaging him in a one-on-one talking session.

“I talked to him from my own experiences,” she said, “because I’ve had a lot of people sick. I knew I needed to help him, and so I told him to stay in the present.”

After Matt’s mom picked him up to take him to the hospital to see his brother, Dave, Kay and the other students got to work making special cards for him.

“I got a big envelope the next day filled with cards saying things like, ‘cheer up’ and ‘things will work out.’ It really, really helped me out,” said Matt. “Everyone here always tries to help, but they went out of their way. They didn’t have to do that.” 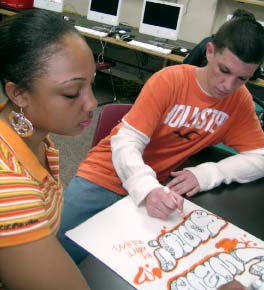 Shortly after that harrowing experience, Matt ran for student council, something he had never considered before. He won and seems to relish his new leadership position. “I have to show that I’m a leader: confront someone — the right way — if they’re doing something wrong, help the counselors, and stuff like that,” he said with pride.

“The way the staff and kids reached out to him made Matt realize what we’re all about here,” said Krajewski. Indeed, an essential CSF Buxmont goal is to instill a sense of community whereby students learn to be responsible, not only for themselves, but for each other.

“Our goal is to get kids to realize that what they do affects others and vice versa. It’s a way of teaching empathy. They learn to look at who is being affected and how,” said Krajewski.

“Most people aren’t raised in such a way that they understand what it means to act in a restorative manner,” he added. “But talking about feelings does work, and we provide support with clear limits.”

The restorative approach means that those in authority at CSF Buxmont work with the students rather than doing things to them or for them. It’s been shown that people are more likely to make positive life changes and adjust their negative behaviors, and be happier, more cooperative and more productive through this approach.

Unlike an authoritarian, punitive or overly permissive approach, the participatory or restorative mode enables the students to restore relationships and build community.

The restorative model shows the youth that he or she has control over and responsibility for his or her own life. Most people will embrace this approach, which allows them more autonomy and participation in decision making.

And at CSF Buxmont, this learning happens in a safe place. The students learn that this community is one in which they are all equal, working hard to reach similar goals and working together to arrive at solutions to problems that come up along the way.

Support comes in the form of helping the kids talk out their feelings, establishing timelines around what is going on in their lives and helping them understand that they have freedom of choice in their lives. It comes in the form of group problem-solving, working through issues that arise in the life of the CSF Buxmont community, and learning how to advocate and vote for the solutions they believe will be best suited for that community.

“Even I struggled with that part of the approach at first … having the whole group find a solution,” Krajewski admitted, “but it’s about the process … about respectful disagreement and how to voice it. It works. And when it works, the whole tone changes for the better in our community.”

Matt knows that after graduation in June, he’ll be faced with challenges outside of the supportive CSF community. He feels confident that the coping mechanisms he’s learned there will help him take time to think through any given situation before reacting; take time to talk to others and openly express his feelings in appropriate ways; and to attend AA (Alcoholics Anonymous) and NA (Narcotics Anonymous) meetings when he feels tempted to abuse drugs or alcohol again.

His post-graduation plans include working with a cousin in his landscaping business, then with his father doing HVAC (heating, ventilation and air conditioning) work, plus keeping up with his skateboarding, unicycling and neighborhood football in his free time.

The restorative community of CSF Buxmont helped Matt by encouraging him to build new relationships with other students, motivating him to be the best student council representative possible, and kindling his hopes for his future.

“A lot of kids have a lot of anger and don’t know how to express it. We tell them that this process we use is not alternative-school stuff,” said Krajewski with a smile. “This is how healthy relationships work in the real world. This is how healthy people communicate.”

This is a lesson CSF Buxmont students learn one at a time and as a community — just as Matt did.