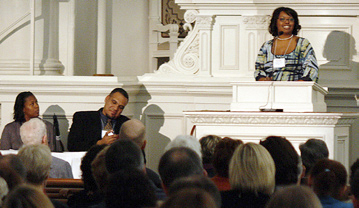 Besides the plenary sessions, the conference consisted of participants sharing their work in “breakout” sessions. All plenary-session and many breakout-session papers are on our website, here.

Intellectually stimulating and soul-nourishing, the conference was a celebration of restorative practices created by everyone who attended, whether or not they presented a session. Coverage of the plenary sessions and a random selection of breakout sessions follows:

A panel from West Philadelphia High School (in Philadelphia, Pennsylvania, USA), where the practices have helped transform a “Persistently Dangerous School” included assistant principals Natasha Cox and Christine Tavares and social worker Kelly Siegal, who talked about how restorative practices enhanced the good work at the school, led by principal Saliyah Cruz. Now when students are about to fight, they coach each other not to; the football team meets in a circle to address its problems; when there is an incident that involves families or police, they hold a circle; and it’s common for students to say, “We need a circle!”

Jennifer Llewellyn, professor at Dalhousie Law School and director of the Nova Scotia Restorative Justice Community University Research Alliance (NSRJ-CURA), in Halifax, Nova Scotia, Canada, discussed Nova Scotia’s restorative justice program. Eight years on, it spends $1.5 million each year on youth restorative justice and is rolling out an adult pilot. The programs were established by the government, which provides funding, oversight and practice standards, and have nonprofit partners in the community, which implement and manage, and the university, which is researching the programs. NSRJ-CURA is partnering with the IIRP to bring restorative practices to schools.

In “Aftercare Reintegration in Juvenile Justice: A Pilot Study,” Roxanne Atterholt, IIRP Graduate School student and transitional services coordinator at New Castle Youth Development Center, Pennsylvania, USA, and IIRP professor Frida Rundell talked about how Atterholt helped a 19-year-old male New Castle inmate create a video diary to address family issues that had never been broached before. The video was shown to his family, and they responded, for several months, transforming their formerly toxic and codependent relationships.

Estelle Macdonald, head teacher of Collingwood Primary School and director of the Hull Centre for Restorative Practices, in Hull, England, discussed her school’s and city’s ongoing journey with restorative practices. Macdonald took over Collingwood Primary, which was in “special measures,” and turned it around with the help of restorative practices. Today Hull is striving to become the “world’s first restorative city,” training 23,000 professionals and volunteers who work with children and youth in restorative practices. Nigel Richardson, Hull City Council director of Children and Young People’s Services, discussed the city’s commitment to the project. Hull is the site of the 2010 IIRP World Conference (https://www.iirp.edu/world-conferences.php).

Restorative justice pioneer Howard Zehr, restorative justice professor at the Center for Justice and Peacebuilding at Eastern Mennonite University, in Harrisonburg, Virginia, USA, discussed the importance of self-preservation for restorative justice workers. He urged us to beware of burnout and become “half-hearted fanatics,” to prevent “shrillness, moodiness, humorlessness, a tendency to take oneself too seriously … the signs of idealism in serious trouble.” He suggested that restorative justice is not yet a social movement, but that in order for it to become one we must engage our communities and sustain ourselves.

In “Promotion and Use of Restorative Practices in Costa Rica,” Miguel Tello, founder and director of Circulos, SA (an IIRP licensee) said his organization is training schools, lawyers and NGOs, facilitating circles and conferences for conflicts, beginning to bring restorative practices into prisons and introducing the practices to Panama, Guatemala and Chile. Discussing implementation challenges, he mentioned his country’s punitive paradigm and nonconfrontational culture, where people feel uncomfortable expressing negative emotion. Still, their conferences and circles have been very successful, solving conflicts that have festered for years.

In “Restorative Approaches: Promising Practices,” Angie Dornai, restorative approaches facilitator with the York Region School Board, of Ontario, Canada, ran restorative practices exploration exercises, having participants examine the elements of good practice, saying, “It’s not about having the answers; it’s about asking the questions,” adding, “Be sure to be explicit with kids.”

In “Community Arts and Restorative Practices: A Documentary Film and Dialogue,” producer/director Tony Heriza screened his movie, “Concrete, Steel & Paint,” in which Philadelphia prison inmates and crime victims created two outdoor murals together, illustrating the prisoner’s and victim’s experience. The two groups had highly emotional encounters in the prison. Ultimately they worked alongside each other creating art, a transformative experience.

Frank Früchtel, professor, Fachhochschule Potsdam (University of Applied Sciences), Potsdam, Germany, discussed the “Life World” of family and friends and the “System” of government, institutions and professionals. The Life World deals better with emotional health, but these efforts have been largely usurped by the System. Family group conferencing, which brings together family and friends to handle their own issues, with strictly delimited professional help, is a potent way for the two worlds to work together.

In “Restorative Practices in Schools in Hong Kong, China,” Dennis Sing-Wing Wong, associate professor of the Department of Applied Social Studies, City University of Hong Kong, and his associates Sindy Sin-Ting Lee, Christy Choi-Chun Pau and Ding-Kee Lai, told of the 50-plus schools that have adopted restorative practices to tackle conflicts since 2003. Wong and his colleagues have launched a media campaign about the practices. February 25, 2006, was “Restoration Day”: A big parade in the streets of Hong Kong celebrated the concept of mending broken relationships.

In go-arounds, every table addressed this topic: “At the conference, I learned, I realized, or I was surprised by…” and chose someone to address the big group. Below are a few selections:

Vidia Negrea, director, IIRP affiliate, Community Service Foundation of Hungary: “Of the eight IIRP conferences I’ve been to, this was the best, not just because there are people here from all over the world, but because everyone is smiling! I’ve really enjoyed our communication about all the improvements we’re making to influence social movements. We are not stressed, we are enjoying the flow!”

Paulene Gayle-Betten, psychology and social work lecturer, Northern Caribbean University, Manchester, Jamaica: “This gathering has been a pepper pot filled with all our different stories. I’ve learned that restorative practices is very useful. When all the other tools don’t work, you can draw from that one.”

Ruth Morin, Native Counseling Services, Alberta, Canada: “When I learned what restorative practices is, I thought, ‘Oh that! That started centuries ago!’ My community is struggling with how to make it viable again, and I’ve gone through many emotions here: frustration, confusion. But now I have a plan: I invite everyone here to an aboriginal restorative practices conference in Edmonton, Alberta, in the near future!”

Dennis Wong, City University, Hong Kong, China: “We would like to bring a billion Chinese people here with an interpreter. We are trying to open the door! We want them to learn that you are beautiful humans!”