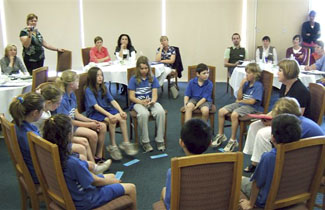 West Beach Public School pupils and teacher Rosemary Griffin participate in SW Metro District’s Restorative Directions Day, engaging in a circle process.Two Australian educators are making an important difference in the emotional and academic vitality of the schools in their regions. Lyn Doppler has been principal of the award-winning Rozelle Public School in Sydney, New South Wales, since 2002. Lesley Oliver is manager of Student Inclusion and Wellbeing for the government of South Australia’s Department of Education and Children’s Services (DECS), representing the South West (SW) Metro District of Adelaide. Each has been recognized for her leadership role in embedding restorative practices in Australian schools.

Restorative practices (RP) in schools is based on the principles of restorative justice. Police officer Terry O’Connell was one of the restorative justice pioneers in Australia in the early 1990s. Currently director of Real Justice Australia (an affiliate of the International Institute for Restorative Practices), Terry O’Connell found that bringing offenders and victims and their supporters together in a face-to-face meeting had a beneficial effect on the healing process. His “scripted model,” used in facilitating such restorative conferences, has had enormous impact on criminal justice throughout the world.

In 1996 O’Connellbegan to adopt restorative justice concepts for use in the classroom. RP is now employed by an increasing number of public and religious schools in New South Wales, South Australia and Victoria. Doppler, in Sydney, and Oliver, in Adelaide, worked closely with O’Connell to introduce RP at their respective sites.

“It’s rare that a school within South Australia today is not aware of RP,” said Oliver. “Each district has some schools using RP principles.” Doppler agreed: “Though we’re doing our things in different ways, we’re always interested in learning about what each other is doing.”

In 2004, about 10 schools in inner-city Sydney, including Rozelle, received RP training from O’Connell. This included students, staff and parents. “All stakeholders ‘singing from the same book’ are essential to the sustainability of the RP paradigm,” said Doppler.
Within two years, Rozelle had experienced a culture change and notable improvements—higher test scores, increased community connectedness, increased enrollments, high parent participation and a decrease in suspensions and bullying. Under Doppler’s guidance, the school has assumed responsibility for empowering all stakeholders and respecting diversity. A top priority became closing the gap in learning for Aboriginal students, who compose 4 percent of the student population, and the 34 percent of students who did not speak English as a first language. Acknowledging individuals’ cultural backgrounds in a restorative way has strengthened the identity of indigenous students and those from immigrant backgrounds. These students’ parents also feel more valued, especially when consulted about their children’s academic goals.

Rozelle School was awarded the prestigious Director-General’s Award for Outstanding Achievement in Being and Learning Together in 2006. Doppler received a Winston Churchill Fellowship the same year, granting her the opportunity “to study the effects of student achievement in schools where RP have been embedded as a way of learning and being together—in the UK, USA and Canada.”
Doppler’s fellowship report findings reinforce the strong link between behavioral change and academic achievement she experienced at Rozelle. (Read the report here.) “Restorative practice can become a way of sensing the soul of a school,” Doppler said. “During my travels, I could tell just by walking into a school and a teacher’s room what the school was like.”

Doppler related the story of a mother and child who had left the Rozelle school district several years ago. The mother told the principal at her child’s new school, “Your school is lovely, but there’s something missing,” and informed her about Rozelle and how RP had built such a nurturing environment there. The principal remained unconvinced. Eventually the mother and child moved back to the Rozelle district. Recently, however, that same principal wrote Doppler inquiring about how to implement RP, saying, “There is something missing and I need to address it.”
Lesley Oliver turned to RP and O’Connell in 2005 in response to behavioral problems within the SW Metro schools. “What we were doing wasn’t working. Teachers were pursuing a very authoritarian way of dealing with students,” she said. “Restorative practice offered an alternative: a way of being, centered on building good relationships. We began working with students to establish a sense of responsibility and accountability. This multifaceted and respectful way of being instilled trust and a sense of hope.”

“You build effective classroom governance by encouraging students to build the capacity for self-knowledge,” said O’Connell. “Fundamental to this process is engagement and the need to be heard and understood.”

Teachers profited from a similar process of engagement. “Previously we had done things for the teachers in our district,” said Oliver. “Rather than convincing teachers, we let teachers reflect. Listening and asking good questions is RP at its best. As I started to ask questions, both our teachers and my staff started resolving situations for themselves. The result was increased effectiveness and enjoyment of the work, for everyone.”

Oliver and her team, mentored and supported by O’Connell, had established RP in 48 schools in the SW Metro district of Adelaide by the end of 2006. With input from her DECS colleagues (including Cheryl Bevan, student support and disability manager) and an independent researcher, Oliver began examining the effect RP had on these schools.

The preliminary research from 2006 confirmed that the introduction of RP positively impacted teacher practice in the classroom. There were several issues that affected the degree of influence, including “philosophical agreement with the [RP] model, depth of understanding of the model, leadership, resourcing, opportunities for practice, reflection and peer support.”

Evaluations done in 2007 demonstrated how supportive leadership and whole-school approaches advanced the process of embedding RP in the schools. Additional data showed a decrease in expulsions, suspensions, detentions and absences. (For more information, please see www.iirp.edu/pdf/SouthWest_Booklet.pdf.)

In mid-December of 2006, Oliver and district leadership asked, “What’s next?” To learn how they could sustain their progress and ensure its growth, the team launched multiple school summit meetings, where sites would share stories of their RP journeys, learn from each other’s successes and setbacks, forge beneficial connections and strategize for the future.

The initial two SW Metro district summits took place in March and June 2007. The top eight schools farthest along in implementing RP were invited to participate. Key staff members from each site shared insights about how RP was benefiting their school. “Schools presenting their stories to other schools at the summit is the most powerful form of communication,” said Oliver. “It’s a rigorous process of reflection and review—and of tremendous value.” The District Restorative Directions Day in November 2007, which was the culmination of the prior summits, allowed summit schools, represented by staff and students, to share their practice with all the schools in the district.

Kim Hebenstreit, principal of Thebarton Senior College, attended the 2007 summits. (The college is one of three dedicated state-funded schools in South Australia that teach adults, many from Africa and Afghanistan, who have experienced loss and trauma.) In addition to establishing valuable networks, Hebenstreit noted that the summit participants “gained confidence in our own processes.”

Behavioral problems at Thebarton led Hebenstreit to invite O’Connell to facilitate a restorative conference at the college in 2005. “In teaching adults, traditional discipline measures or giving punishments like detention are inappropriate,” said Hebenstreit. Several of the school’s refugee students had personal issues that were resulting in explosive behavior. After making the implementation of RP a top priority, Thebarton experienced a dramatic turnaround in school culture. In 2007 it was chosen as the first secondary UN School for Global Peace in Australia.

The Sydney Region Student Services Team hosted the region’s first school summit (which they called a “forum”) in September 2007. A hundred representatives from over 80 schools in the region attended. Four primary schools and secondary schools at different points in the implementation of RP shared their stories. Key speakers Lesley Oliver and Lyn Doppler reported on their work as well. Forum participants will now meet on a regular basis to problem solve and come up with innovative long-term measures to advance RP in Sydney schools.

Oliver, Doppler and other committed educators in southern Australia are creating a vital network dedicated to keeping their RP vision on track. Though in its infancy, the research and evaluation undertaken by Oliver and DECS is adding rigor and direction to RP expansion in South Australia. Doppler, in turn, is a credible ambassador for the RP principles and methods that are empowering students to become, as she said, “motivated lifelong learners and happy, effective members of the global community.”