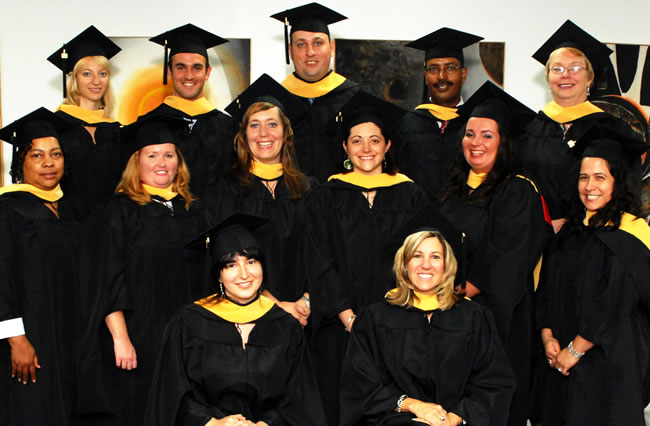 IIRP president Ted Wachtel began the ceremony by answering the question he thought might be in the minds of audience members: What is restorative practices?

Every day in schools around the world, a young person misbehaves and is asked to leave class. He or she is punished, sometimes asked to leave school for a few days, and then comes back to class. But nothing is resolved; the same tension and conflict remains. This happens over and over.

There’s no evidence that punishment does anything but change behavior while someone in authority is looking, at best. But how do you get people to make changes inside themselves? 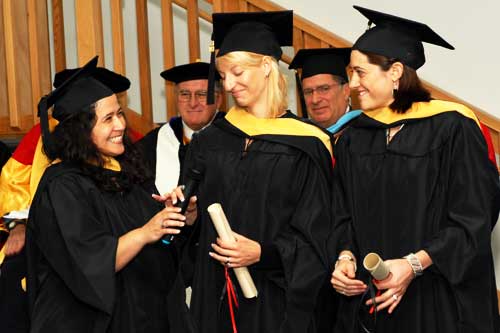 Gloria Alvarez Pouleson passes the “talking piece” to Nicole Sutterby, as Deanna Webb awaits her turn, and IIRP vice president for academic affairs Patrick McDonough and president Ted Wachtel look on Restorative practices suggests that there might be something different we could do. We need to give people a chance to deal with the underlying issues, to talk to each other in a real way about what’s happened, how they’ve affected people, and what might be done to change what’s going to happen in the future, so there’s some level of resolution of the conflict.

These practices apply not just to education but also to the criminal justice system, the community and families, said Wachtel, adding that there is a growing body of evidence to support the notion that they actually work. He told a story of hope:

One of the toughest schools in America — West Philadelphia High School — six years on the “Persistently Dangerous Schools” list — decided to embrace restorative practices. Within six months they’d dropped violent incidents by over 75 percent; fires, which were being set almost every day, didn’t occur at all, and a dramatic change happened in the tone of the school [see eForum article here, video: www.iirp.edu/westphilahigh].

Wachtel said he was sure that the members of the IIRP 2009 class would go out into the world and create their own stories of hope.

Following a traditional presentation of master’s hoods and diplomas, instead of a valedictorian speech, all the graduates shared their thoughts with the audience in a “talking circle” — a process they learned and used in IIRP classes — passing the microphone around as a “talking piece.”

All of their stories are wonderful. Here are just a few (unfortunately space does not permit us to tell them all), distilled from the talking circle and interviews:

Bonnie Witt choked back tears as she said, “Thank you all for the opportunity.” A special education teacher at a middle school in Cherry Hill, New Jersey, USA, Witt has worked for 30 years with severely learning disabled pupils and those with emotional and behavioral difficulties:

IIRP classes gave me millions of ways to keep the kids connected on a proactive basis. I’ve built a community in my classroom. The kids started policing themselves; they took on responsibility for themselves. My kids have met tons of failure. Having a restorative approach has made my classroom a safe place for them to make connections.

Kevin Eisenhart thanked the IIRP staff, faculty and his classmates for their help, saying, “It’s been a wonderful ride.” An intensive aftercare juvenile probation officer in Northampton County, Pennsylvania, USA, Eisenhart has been incorporating restorative practices into his work:

IIRP classes changed my view of the justice system. I changed my intake process to make it more restorative, directly involving victims whenever possible. To give one example, in one situation, I really saw a kid change. The victim came to the intake, and we gave everyone ample time to talk. We discussed the situation, the kid apologized to the victim, and we came up with a plan for him to make amends. Everyone was satisfied with the process, and we were able to avoid any further problems with that kid.

Gloria Alvarez Pouleson thanked her husband for the meals he prepared and her four children for their understanding while she completed her degree. Alvarez Pouleson works with Hispanic children, ages infant through three, with developmental delays, in Reading, Pennsylvania, USA:

I love the idea of giving people power to take responsibility for families and communities, instead of doing things for them or to them. I realized that I was doing a lot of things for clients. Now I allow parents and families to be empowered. It has definitely freed me up to do more research on conditions like autism and Down’s syndrome and other developmental delays so I can be of more help to more people. 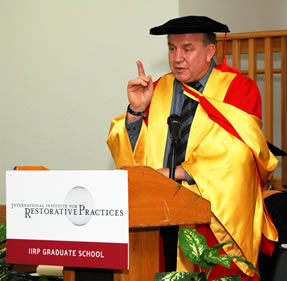 Director of Real Justice Australia Terry O'Connell addresses the graduates.Mary Ellen Mannix introduced her family to their “new extended IIRP family.” A preschool teacher in Rosemont, Pennsylvania, USA, Mannix also founded the Pennsylvania chapter of the healthcare safety advocacy organization PULSE of America, after the death of her infant son due to medical malpractice. Mannix has begun using what she’s learned at the IIRP to try to “renew the trustful relationship between patients and physicians.” She believes that IIRP classes enabled her to finally speak to the surgeon who caused her son’s death.

Lemi Daba Gudeta said: “The IIRP is my family. I am here by myself, but I am not alone. I am really proud of this institution. It is a hope for a hopeless society and a hopeless generation.” Gudeta came to the US several years ago to pursue his Ph.D. in anthropology. He hails from Ethiopia, where he was a restorative justice practitioner, working with prisoners, victims and families:

IIRP classes have really helped me expand my knowledge of restorative justice. Until I came here I had no idea that restorative practices could be employed in any field, such as education. This was a great insight for me, in my work and in my life. I also had limited skill in how to listen to offenders, understand victims and heal wounds.

O’Connell talked about the importance of creating rituals and opportunities for people to share their thoughts and emotions, thereby enabling them to change their behavior. Without such opportunities, he said, we simply reinforce negative behavior. “Learning is enhanced by challenge and impeded by threat,” he said. “If we focus on blame, we close people down; they become self-absorbed and have no idea how their behavior impacts others.”

Be really clear about your practice rationale. Think about what a solid, rigorous framework for your practice would look like: one that would allow you to know that you’re engaging people in a respectful way and helping them to develop the capacity to feel empathy, make changes in their behavior and be accountable and responsible. Be explicit in a way that allows you to share the basis on which you build your practice with those you are helping. Be a facilitator, not a problem solver. You can’t do everything, and there’s a sense of liberation in that. But you can do something, and you can do it really well.