Both Mexico and New Orleans, Louisiana, USA, are experiencing high incidences of crime and violence. To find new ways to deal with this issue, participants from both locations recently attended special four-day immersion events at the IIRP’s Bethlehem campus. An April 26-29 event involved 30 criminal and juvenile justice officials from 10 states in Mexico; a May 11-14 immersion included 15 educators and youth-justice professionals from New Orleans.

Both groups spent two days visiting the IIRP’s model program schools for at-risk youth, operated by Community Service Foundation and Buxmont Academy (CSF Buxmont), and two days training in restorative practices. The participants were very excited about what they observed and learned, and most are hoping to begin implementing restorative practices when they return home.

The seeds for the Mexicans’ visit were planted when John Bailie, IIRP director of trainers and lecturer at the IIRP Graduate School, presented a paper at the First International Restorative Justice Conference: Humanizing the Approach to Criminal Justice, in Oaxaca, Mexico, in September 2008. Subsequently, Nancy Flemming, coordinator of the alternative justice area of MSI’s (Management Systems International) Programa de Apoyo para el Estado de Derecho en México [Support Program for the Rule of Law in Mexico — PRODERECHO project, funded by USAID], organized the IIRP visit to help immersion attendees find ways to improve their respective states’ criminal justice systems. This undertaking was mandated by a 2006 amendment to the Mexican constitution requiring states to reform their penal codes to make them more effective and more humane — to include oral trials, the right to legal counsel and other legal prerogatives. Many of the immersion participants are involved in this reform process, in a variety of ways.

Several immersion participants from Mexico offered comments about the experience and their hopes for the future, a few of which follow: 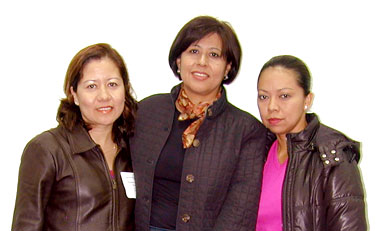 Our system is not responding effectively to the needs of victims. We have 60,000 legal claims a year. The public prosecutor has no way to address this many cases efficiently. We

need to find new ways to provide quality service and alternative means of solving conflicts. This will form the foundation of a new criminal justice system in the state of Tabasco.

We need alternative means in order to have the highest impact in the community on crime and empower two parties in conflict to solve their own legal issues and meet their own needs. We expect a large percentage of cases will find a solution through alternative measures throughout Mexico. The government has given us six years to implement these changes. But we don’t want to wait. Now, we have seen a new vision and perspective on ways to help teens in conflict with the law and a more comprehensive way, not only to resolve legal conflicts but also to provide education support to create better values and a more peaceful way of life.

Mexico is a very violent place. Violence has become so normal in our lives. Our traditional justice system is very bad now. We need restorative practices everywhere: our court system, our schools, our prisons and our families, to resolve conflicts and stop the culture of violence. The training has been amazing. Watching the kids in the circles yesterday [at the CSF Buxmont school], I was restored: seeing the possibility for change, the way relationships are transformed, the sense of community, the way kids take responsibility for each other. I hope in Mexico everyone will have this philosophy.

Mercedes Lorena Perez Morga, director of the Alternative Justice Department for the Oaxaca state, also through a translator, said:

Nancy Flemming chose me to come with two facilitators from the Oaxaca Restorative Justice Center. I am in charge of the only center in Mexico that is already implementing restorative justice. I have been working with restorative practices for three years with teens under 18 years old who are involved in minor crimes. They have to admit responsibility for their actions and meet with their victim to try together to restore harm. This process also involves the victim’s and offender’s supporters. The victim gets answers and gets to know the offender, and at the end they make an agreement. Then, with the court’s involvement, the young person commits to performing community service, getting treatment and restoring harm to the victim. I am highly motivated to take what I learned from visiting the [CSF Buxmont] school this week back to Oaxaca to replicate the wonderful work done here with teens. The circles and hearing from peers are very important. Young people are highly vulnerable, and we need fair processes for them. Restorative practices are already having very positive results in the past three years, solving problems with dignity and peace.

The visit from New Orleans was initiated by Jefferson Parish Juvenile Court Judge Nancy Konrad, who “read an article about restorative practices and had a dream for our future,” said immersion participant Blake Bascle. A juvenile court intake officer for the Jefferson Parish Juvenile Court pre-adjudication program, FINS (Family In Need of Services), Bascle attended an IIRP training in October 2009 and “started doing circles immediately.” He has used them, he said, “with 100 kids. Kids love it. Restorative practices are about reinstituting community and building connectedness. It’s easy to victimize people you don’t know. If you improve relationships you change behavior. Then you see more success in school and less crime.” Bascle said he was “excited to see all the people I came with attach positively to the idea of restorative practices. Everyone was transformed. There are people here from our schools, juvenile justice and police. I hope our whole parish can be on board working with kids in this way. I tell people I came here to learn how to change the world. Really.” 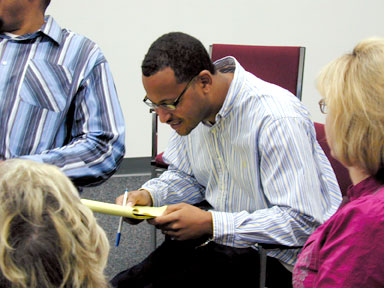 Seeing kids take responsibility for themselves and each other [at the CSF Buxmont school] was BEAUTIFUL! If we can implement restorative practices, I know I’ll have a reduction in habitual rule violators. Students will have a voice. This isn’t fluff, and it isn’t fake. It’s a valuable tool for any learning community, for any community, period.

I was already sold that we need restorative practices in our school. I brought one of my favorite teachers, who’s punitive. I need people to buy in: that’s why so many of us are here. The best thing was to see it [restorative practices] put in play. These [CSF Buxmont] students are very much like my kids. All of my kids were expelled; 71 percent have arrest records; 53 percent have drug and alcohol issues. Restorative practices will give my kids social skills, enable them to learn how to deal with conflict and encourage them to lead. Seeing kids just like mine working together, supporting each other and confronting each other in a non-threatening way and accept it was an inspiration. This is what my kids need.