From Chicago, Illinois, USA, a police officer looking for effective alternatives to school suspension and the court system for delinquent young people

From San Francisco, California, USA, the director of a new prison dorm for war veterans hoping to learn restorative solutions for inmates

From São Paolo, Brazil, a community trainer working in the most violent urban neighborhoods refining her knowledge of restorative techniques

From Louisville, Kentucky, USA, a teachers’ union representative checking out restorative practices on behalf of his school district

The STI participants learned the concepts and strategies of restorative practices — a proactive approach to positive behavior support based on communication and mutual respect — by listening to presentations on basic theory, watching videos and participating in role plays and discussions. After five days together, they went their separate ways, eager to bring their newfound knowledge back to their respective settings. 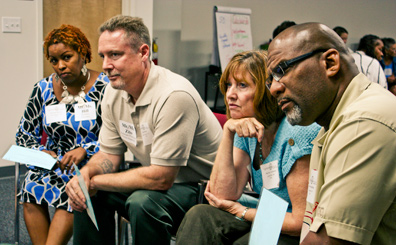 Here are seven stories out of many, gleaned from interviews during the STI:

Chicago police officer Richard Wooten and proprietor of Rich Wooten and Associates, Inc., a security and private investigation firm, said he had found out about the IIRP on the internet. He is now preparing a proposal for the Chicago public school system to promote restorative practices as an effective alternative to suspension. “Now kids don’t have a voice,” he said. “They also don’t realize how their behavior affects other people.” In addition, under the auspices of the Chicago Alternative Policing Strategy (CAPS), which works with the community to solve problems, he hopes to employ restorative practices within the community. “This gives the power back to the people, so the community can take ownership of its own problems,” he said. “Restorative practices provide a useful opportunity for everyone to immediately deal with a situation, instead of waiting for the court system for years. It brings things to a close.”

Amy Greco, a social worker at the Urban Assembly School for Green Careers, a public high school on the Upper West Side in New York City, was sent to the STI by her principal to explore restorative practices. The school’s students “have lots of needs,” said Greco. Most are from Harlem and Washington Heights, 100 percent are eligible for free lunch, 30 percent are special education students, and 25 percent are ELL (English language learners). Greco said that processes similar to restorative practices had been “written into the plan for the school,” including a Fairness Committee, Community Values (developed by the staff: Respect, Peace, Diversity, Active Participation, Sustainability and Fairness) and collaborative problem solving between teachers and students. If a student breaks a Community Value, he or she appears before the Fairness Committee, which decides on a consequence for the student. But this process doesn’t always work, said Greco, especially with extremely disruptive students. “Fairness is one thing,” she said, “but I think restorative conferences might be really helpful.” Another problem Greco faces is the perception among parents that restorative practices are “too soft. They don’t want to hear ‘let’s sit down and talk.’” Because of what she learned in the STI, said Greco, “I now know how to explain to parents why this is not a ‘soft option’ for kids.”

Aida McCray, rehabilitation coordinator for the San Francisco Sheriff’s Department, attended the STI with three other staff members from the San Francisco prison system. All are involved with restorative programs within that system, under the helm of “visionary” Sheriff Michael Hennessy, as McCray called him. McCray is director of a new prison dorm for veterans of military service. Most served in the wars in Vietnam, Afghanistan, Iraq and Somalia. The majority of these inmates were honorably discharged. (Among Iraq and Afghanistan war veterans, she said, 15 percent will be incarcerated, and one commits suicide every day.) Many of the inmates, she said, brought the lethal violence they learned in their military jobs home to their loved ones, and they are unfazed by authority. The goal of the new program is to break the cycle of violence. McCray said she was glad to attend the STI to gain more understanding on how to restore the lives of the inmates she’s working with. She also said she hopes to use circles with her staff.

Joanne Blaney, a leadership trainer and educator at the Center for Human Rights and Popular Education in São Paolo, Brazil, works in some of the most violent urban areas in the state. Formerly a school principal in Washington, D.C., Blaney said she trains people in restorative practices “from all walks of life,” including mothers, teachers, psychologists, social workers, attorneys, government officials and judges. In particular, she said, her organization is training officials to use restorative practices with adolescents who have committed serious crimes. “Restorative practices can be used anywhere, once people have the skills,” she said, adding, “It works with people who have suffered traumatic violence and with aggressors, as well. It’s a way to transform everyone in the circle, and the problem, too. It has the capacity to make positive change in people’s lives and within communities, and it can empower people to have the skills to go forward and work things out themselves.” She stressed the importance of learning good practice and said she was glad to attend the Summer Training Institute and take part in the role plays: “You have to really learn the techniques,” she concluded.

Peter Bishell, a graduate student in secondary education at the University of Canberra, Australia, is in the process of making a career transition from running his own accounting business to teaching school. About the STI, he said, “The reasons behind making the transition to a teaching career have not been clear in my mind — until now. This course has reminded me why I chose to move into teaching. I’ve always been really interested in what helps people work together for the good of the team or the community. I’ve been taking a university course on promoting good learning environments. Restorative practices was just mentioned in passing. It should be the whole course.”

Bev Ashton, district liaison for Lincoln County Community Justice, Idaho Department of Juvenile Corrections, Twin Falls, Idaho, attended the STI with three probation officers from her state. Ashton said that Idaho had been interested in restorative practices since 1995 and that BARJ (Balanced and Restorative Justice) is written into juvenile corrections statute there. The challenge, she said, is “to actually implement the practices, not just talk about them.” Their biggest problem, she said, is “family engagement and the lack of good support systems,” and the most prevalent crimes are property theft, vandalism and gang activity among the growing immigrant population. Ashton said she appreciated the STI because of its concrete, “nuts and bolts” approach. She said she is very excited to implement restorative practices in community-service, victim-offender and reintegration processes. She is particularly eager to begin using family group decision making (FGDM) to engage families. Concluded Ashton, “I did a lot of searching for restorative practices training in the U.S., and I didn’t find a lot of it. I want to bring this to Idaho. I believe in this; I’ve been a fan since the beginning.”

Six Jefferson County (Louisville), Kentucky, education professionals attended the STI, including James Hughley, UniServ (“Unified Service”) director for the Jefferson County Teachers Association (the teachers’ union). Hughley, a union representative for the county’s middle and high school teachers (and a former teacher himself), said that the school district sent three representatives to the training, and the union sent three. “I think both sides like restorative practices,” he said. He previously attended an IIRP One-Day Conference in Baltimore and visited two schools there where restorative practices have been implemented to see the practices in action. He said he thought the practices would be most helpful in Jefferson County’s high schools because “the majority of students who get involved in the juvenile justice system come directly from high school.” He said he hoped that restorative practices would reduce that number by helping students “learn to manage their own behavior and develop a new mindset on how to interact with other students and staff.” He continued, “To have kids engaged so that they come up with their own solutions would be a great thing. I can’t see why our school district wouldn’t find this beneficial in addressing issues in schools, and if it gets going there, it should also be implemented in the juvenile justice system. That would really resolve a lot of youth issues.”