A classroom at the first CSF school, in Sellersville, Pennsylvania, USAThirty years ago, in December 1977, the Community Service Foundation (CSF) welcomed Jimmy*, its first client. Bucks County Juvenile Court (Pennsylvania, USA), had referred Jimmy, 15 and just released from juvenile detention, to CSF as a test case. A brain-damage victim—probably at the hands of his father—Jimmy liked to steal large construction vehicles and drive them around.

Ted Wachtel, now president of the International Institute for Restorative Practices (IIRP), had been a public high school teacher. Frustrated by the way he saw “difficult” youth being treated, he left his job and, in March 1977, obtained a private school license for CSF. By December, CSF had a staff—Ted and two short-term employees—and a home—a room in a local church. Jimmy spent nights with friends of the Wachtels.

Ted and his wife, Susan Wachtel, also a former school teacher and now executive director of Buxmont Academy and one of the founding administrators at the IIRP Graduate School, were providing foster care for girls referred by Bucks County Children and Youth Services in their home, while raising their two young sons. Susan soon joined Ted at CSF.

Ted Wachtel found Jimmy a challenge but also “a sweet kid” who he enjoyed working with. Because of CSF’s success with Jimmy, Bucks County Juvenile Court began referring a steady flow of youth to the program, and CSF ultimately received three years of federal juvenile justice grant funding.

From the start, CSF developed a pragmatic, non-punitive philosophy that informed its work with youth. It involved group processes, engaging and supporting young people in taking responsibility for their own behavior and finding ways to solve their own issues. First called “action counseling,” this antecedent of “restorative practices” still underpins CSF programs today.

The Wachtels soon realized that drug and alcohol abuse constituted a significant thread in their work with young people, and they became certified addictions counselors. They found the approach of organizations like Alcoholics and Narcotics Anonymous consistent with CSF’s restorative philosophy, as these self-help groups engage people in taking responsibility for their own recovery and constitute therapeutic communities to facilitate that process.

CSF quickly outgrew the little church and moved into its own building in Sellersville. In 1984 it opened a second center in Trevose. Rick Pforter, now director of CSF’s Day Treatment Program, then a houseparent with Bucks County Juvenile Probation’s group homes, was already involved with CSF and was referring youth to the program.

Also in the early 1980s, CSF sponsored TOUGHLOVE®, establishing self-help groups for parents of struggling youth, concurrent with the publication of the bestselling book, TOUGHLOVE, coauthored by Ted Wachtel.

In 1989 CSF started the Intensive Program, aided by Jim Dille, then Youth Services Officer with the Bucks County Youth [Detention] Center, now CSF’s director of evaluations. The program provides services for youth who have completed a drug and alcohol treatment program, helping them maintain ongoing sobriety. 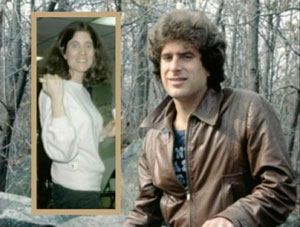 Ted and Susan Wachtel in the early days of CSFIn 1994 Ted Wachtel heard Australian police sergeant Terry O’Connell (now director of Real Justice Australia) speak about a process he had helped pioneer for dealing with crime and conflict. Called “conferencing,” it provides a process for offenders, victims and their supporters to meet face to face, allowing victims to express their feelings and offenders to take responsibility for their actions. This meeting spawned the Real Justice program, which advocates conferencing and other restorative practices. Hearing O’Connell was “an epiphany” for Wachtel: Conferencing fit perfectly with practices CSF had used for years. Several months later when visiting one of CSF schools, O’Connell observed, “You’re running conferences here all day long!”

In 1995 CSF received a National Institute of Justice grant to undertake the first evaluation of restorative conferencing in the United States. Dr. Paul McCold joined CSF in that year as chief investigator for the study.

Also in 1995, led by Jim Dille, CSF founded the Home and Community Supervision Program, to provide individualized, in-home services targeted to clients’ needs and probation and children- and youth-agency requirements.

Buxmont Academy, CSF’s academic school, was founded in 1996 as an independent nonprofit corporation that collaborates with CSF to serve the growing number of students referred directly by public schools and parents. By 2003 CSF and Buxmont were operating eight schools throughout eastern Pennsylvania, serving youth from the mid-Atlantic region.

In 1999 CSF and Buxmont launched the International Institute for Restorative Practices (IIRP) to provide education, consulting, research and international conferences, produce videos and publish print and internet resources about restorative approaches. In 2006 the IIRP was authorized as a degree-granting graduate school.

CSF alumni speak for themselves (with years of attendance and what they’re doing now)
David Tomlinson, 1981-1984, father, youth counselor: “We students created the school. There was a sense of community that came from the fact that we were all equal. Whenever there was a problem we sat in group until we came up with a solution.”

Tiffany Morris, 1991, mother, medical technician: “I came from a hostile environment. Without CSF I wouldn’t know how to love my children or myself.”

Kate Remolde, 2002-2004, alternative school counselor: “At CSF I learned that I can do anything if I put my mind to it. I can be a positive influence on someone who needs it.”

CSF staff members speak (with start date and current title, unless noted above)
Rick Pforter, 1986: “CSF is who I am. I’ve seen this organization grow from four employees and eight kids to what we are today. I’ve always thought that we do it [work with youth] better than anyplace else.”

Rev Rhodes, 1987: “It’s been a phenomenal thing to see all these thousands of kids grow and change.”

Terri Hogg, 1987, Day Treatment coordinator, CSF: “I came from working at a county youth detention center, which was just a holding facility. CSF gives kids an opportunity to change.”

Greg Petrick, 1987, industrial arts teacher, CSF: “You can’t help but be changed by CSF, whether you’re a teacher, a counselor or a kid. We’re a community.”

Ben Rush, 1987, lead counselor, CSF: “CSF reaffirmed my belief that people change when you give them a reason to change.”

Pam Thompson, 1988, assistant director, Day Treatment, CSF: “At CSF there are the same expectations for kids and staff, whether you’re ‘special-ed,’ a teenager, on probation or have a degree.”

Jim Dille, 1989: “CSF is the best of the best for kids. As staff, your concerns are actually heard, no matter what they are.”

Craig Adamson, 1995, executive director, CSF: “Even with messy situations, at CSF we find a good way to deal with it directly, whether it concerns kids, support staff, counseling staff or anyone.”