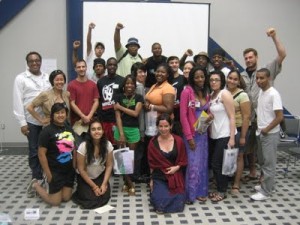 Dignity in Schools posted this piece by Derek Slaughter, a high school student from Baltimore, Maryland who is involved in a national student movement to draft a Student's Bill of Rights. This strikes me as a significant move by youth to establish their own rights. I found some information about this movement here. Slaughter here argues for explicit mention of the "right to restorative justice" in this prospective "bill of rights."

Throughout my educational career, I have heard my peers say that things aren’t fair or that they have been unjustly punished in schools. Administration being overzealous to implement extreme disciplinary action is a common theme in schools throughout the country, which I have observed in my travels. For this reason the National Student Bill of Rights movement believes in installing restorative justice systems in communities and schools.

The principles of restorative justice require people to look at the root cause of the offender’s actions before the implementation of an arbitrary “punishment.” Through the restorative justice process, there is no need to enact zero tolerance: participants can see that there is a much better alternative. It is important to emphasize that students must be actively involved and engaged in restorative justice systems in order to keep these systems from returning to a regular authoritarian discipline structure.

The heart of any restorative justice system, whether in or out of school, is repairing harm and reconciling the offender and victim. Restorative justice does not equate to a lack of consequences for one’s actions. It takes a different approach to reaching a solution to root problem that causes the offense to occur, rather than solely focusing on the offense.

At my school, Heritage High, students have been trying to establish a student court that will allow students, teachers, and administrators to receive mediation between the offender and the victim. The beauty of a system like this is that students also have the liberty to take teachers and administrators to court for any offense they may commit. This will ensure that all parties in the school feel equally defended by a system they believe in. I am thrilled that the administration of the school is interested in starting the student court. (I do have one criticism, which is based on the administration’s apprehension to allow cases that involve violence to be brought to the student court. I hope that we come to a reasonable agreement for the sake of real restorative justice).

We based our student court proposal on right number 6 in the National Student Bill of Rights: Students and youth shall have the right to establish systems of restorative justice in schools and communities, shall not be excluded from educational opportunities except by a jury of their peers, and shall not be charged for crimes as adults until the age of 18.

via Yes, Schools Have an Alternative to Zero Tolerance | Dignity In Schools.