Growing Fairness, a film and a social movement 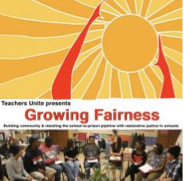 Bryce Stucki, a reporter at The American Prospect, takes a look at Growing Fairness, a new documentary by Teachers Unite that critiques punitive school discipline policies and suggests they be replaced by restorative practices. He writes:

“Education was where my heart was,” says Tyrone Sinclair in Growing Fairness, a documentary showcasing the impact restorative-justice programs can have in our nation's schools. Sinclair says he was expelled from school at 16, became homeless, and then ended up in jail. Now, he organizes young people in Los Angeles. “I knew that wasn’t the place for me,” he says of prison. “I love to learn every day.”

Growing Fairness was screened at the Thurgood Marshall Center in Washington, D.C., this Wednesday, at an event hosted by Critical Exposure, a local youth group that trains high-school students in photography so they can document problems in their communities. The audience included mostly high-school students and people in their 20s, most of whom were interested in or researched education reform, though a few older community members and attorneys for civil-rights organizations were also present. The event was part of the fourth annual Week of Action organized by the Dignity in Schools Campaign, a network of grassroots groups who want to reform school discipline by turning schools toward restorative justice instead of well-worn—and ineffective—punitive measures. Restorative justice is a theory of discipline that emphasizes rehabilitation rather than punishment. In 2009-2010, over 3 million students were suspended from K-12 schools, most of them disciplined for minor infractions, like disrupting class. Suspensions do not just mean missed time; they also lower a student’s chances of graduating. People who do not graduate from high school are more likely to be imprisoned later in life. Reformers believe restorative justice can largely stop that process, also known as a school-to-prison pipeline.

Stucki discusses the success of restorative practices in several schools nationwide, including West Philadelphia High School, and he mentions the 10 schools in Philadelphia that are currently piloting implementation of IIRP's whole-school change program. Stucki laments that in the current climate of school closings in major cities, programs like restorative practices may be difficult to fund. He concludes:

Even if the funding is not there, the will, at the least the latent will, is. In a recent survey of New York City teachers, Teachers Unite and the National Economic and Social Rights Initiative found that educators believed “overwhelmingly that what makes a school safe was really a whole school-culture approach, not just one isolated practice,” says Lee. Matthew, a 10th grader interviewed in Growing Fairness, echoes that sentiment. “The teachers have a lot of respect for the kids here and I find that amazing,” he says of his new school, which has a restorative-justice program. “Because at my middle school, if you were failing, you were failing—they didn’t offer you anything. But at this school I find that with the support of my teacher and the other teachers here, I can succeed.”

Learn more about the documentary film, Growing Fairness, which was released by Teachers Unite last month.