President's Blog: How to convert “law and order” critics of restorative practices 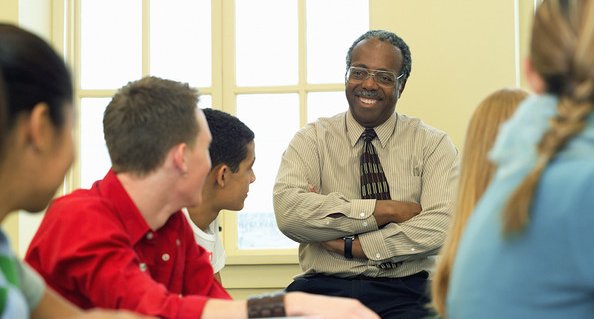 In his latest post, the IIRP's second president, John W. Bailie, Ph.D. challenges educators to remember that the power of restorative practices for school climate change rests in providing both support and discipline, love and limits.

Before becoming president of the IIRP, I spent more than 15 years training and coaching some of the most challenging public schools on how to implement restorative practices. Before that, I was a counselor for troubled and adjudicated youth.

During the early days of the IIRP, few people had even heard of restorative justice – much less the new and larger idea of restorative practices. This was the heyday of zero-tolerance in the aftermath of Columbine – the 1999 school massacre in which two high school students shot and killed 12 of their fellow students and one teacher, and injured 21 others before committing suicide. This tragedy was soon followed by a renewed “law and order” oriented federal regulatory culture under President George W. Bush in a post-9/11 world.

One might say that the late 1990s and early 2000s was possibly the worst time to advocate for a new form of school discipline that emphasized reparation of harm rather than the application of impersonal punishment. Broadly speaking, the country was in a fearful (if not downright vengeful) mood about perceived threats to public safety.

Every night on the news one was bound to see a story that implied any suburban teenager could be a potential mass murdering school shooter, and that the inner cities were being overrun by teenage predators. After September 11, 2001, you could add to that mix the fear that a terrorist might fly a plane into a building at any time.

Promoting restorative practices and opposing the school-to-prison pipeline in this setting was a challenge. Schools districts were looking for better ways to identify, neutralize and control potential threats from their students. They were not looking for a new framework for whole school climate change that focused on proactive relationship building and restorative justice in discipline. And frankly, given the culture at the time, this was understandable.

The most frequent challenge to the idea of restorative practices in schools was (and still is) that it is “soft” on misbehavior and helps students escape “real” consequences (i.e. defined as punishment). Further, critics charged, any perceived softening in discipline by adults would encourage even more misbehavior among the children. In other words, implementing restorative practices would show weakness on the part of the adults, and students would take advantage of this to run roughshod over them. You might find it surprising that, as someone who has dedicated my professional career to restorative practices, I actually agree that this can happen.

Restorative practices, like anything else, can be done badly. It can be implemented poorly and with the wrong intentions.

Sub-standard training and practice coaching for staff charged with onsite implementation can happen – and the result can be ineffectual discipline that neither deters nor restores. Replacing practices that occasionally work (like punishment) with practices that rarely work (like poorly trained and implemented restorative practices), can make your building feel less safe and more permissive. Any restorative practices advocate who wants to be taken seriously by skeptics should admit the above. Because it’s true and you’ve likely seen it happen. This is a challenge that should be met head-on, not avoided.

As we learned in the early days of restorative practices, if you want to convert skeptics and critics into supporters and avoid the pitfalls of bad implementation, you must first speak their language and accomplish two primary tasks.

More than anything else, people want to feel safe. Over the last 20-plus years, there has been a tremendous amount of propaganda that has inflated potential threats posed by teenagers. But it is also true that some schools are dangerous places to work and learn. I’ve worked in some of them and so have some of you. There are some potentially dangerous students walking the halls. I was a counselor for troubled youth. I’ve met some of them and likely so have you. Acknowledge the above to critics and assure them that you agree that school safety is paramount.

Until you clear that hurdle with a skeptic, they won’t really hear anything else you say. In general, this is how I answered the question:

What you do now for discipline isn’t tough. It’s actually pretty weak, and the data shows that it doesn’t work. I don’t think your students think your discipline is tough either. I don’t see how habitually sending a student home for a few days holds them accountable for what they did. You basically allow them to escape the need to face the real people they impacted, and you insulate them from being confronted. I’d rather have them here, where they have to face me and others. Your typical “punishment” is letting them off easy. As a professional, what’s scarier: getting written up or being personally confronted by your peers and supervisors with the real impact of your poor behavior or performance? I can show you a much tougher form of accountability that has the added benefit of changing future behavior…

2.    Be able to demonstrate this "toughness" in practice and show its benefits with data.

If you assert that restorative practices is “tougher” (i.e. now defined as being more relationally and emotionally effective) than punitive discipline, you have to be able to prove it. Skeptics won’t believe it until they see it. Even school leaders who saw themselves as “tough on crime” were usually shocked during their initial sessions when I and my colleagues provided onsite coaching for their staff. In general, we were likely to be orders of magnitude more confrontational, consistent, direct and “real” with students than staff were used to being themselves.

Staff frequently thought that the “hippy-dippy” restorative people were coming for the day to hug kids and run some goofy circles. Instead, we showed staff that they needed to be much more consistent, proactive and even aggressive about confronting small things, show a willingness to stand up for themselves and other students and take control of their classrooms again. This wasn’t done through fear but by making sure students were confronted with the real emotional and personal impact of their behavior. Anger was okay, too. We just taught them how express their anger in ways more satisfying and effective than repeatedly handing out suspensions and expecting a different result.

Regarding restorative alternatives to more formal discipline, the general rule of thumb we taught was: you’ll know you’re doing it right when students beg you to suspend them instead. If that’s not happening (at least at first), you’re doing it wrong.

We then prepared them for the fact that, in the short term, discipline numbers for low-level offenses might actually get worse for a semester or two. This makes sense because staff would be more actively confrontational and much more consistent with setting far higher expectations for behavior.

Especially in a school where things have been out of control, students will not thank you for doing the above. The most habitually misbehaving students might even behave worse at first. In an anarchic school climate, these students typically have tremendous negative social and emotional power over both staff and students. Restorative practices, done right, takes that negative power away. They will resist and rebel against this change in power.

Over time, all of the hard work above can and frequently does result in a far safer, more orderly and more humane school climate.

There’s a lot more that could be said here. Like many of you, I’ve been an active public critic of the school-to-prison pipeline and can remember railing against zero-tolerance policies when no one wanted to hear it. I care deeply about young people and want to help correct and confront an educational discipline system that unnecessarily tracks many of our most vulnerable youth into the criminal justice system. This is a travesty, and together we are changing it.

However, this change must include improved personal and individual accountability and responsibility-taking by both adults and students. In our drive to protect children from an unfair and often biased system, we must not forget that on the personal level they also need boundaries, limits and confrontation when necessary. The power of restorative practices is in providing both support and discipline, love and limits. There’s also a time to suspend and expel – but that should be as rare as possible.

Now that restorative practices is gaining significant traction in public education, critics are once again charging that these reforms will make schools less safe. Understand, this will always be the primary argument against restorative practices. It cannot be dodged by simply impugning the critics' motives. The charge must be met and answered boldly and convincingly - not with rhetoric but with more effective practice.

On the grounds of improving student safety, the restorative practices argument can fight and win.

If restorative practices is going to be an effective and sustainable alternative to a hundred years of impersonal/bureaucratic/punitive discipline, then it must be more effective at holding people accountable. And not just a little better. Restorative practices must be substantially, noticeably and demonstrably better, and “tougher,” on the individual level than current school discipline practice. And we have to be able to prove it.