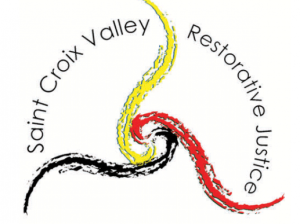 St. Croix Valley Restorative Justice Program (SCVRJP), based in River Falls, Wisconsin, USA, has developed a unique practice for working with young adults who have been arrested for crimes such as underage drinking, possession of drugs and paraphernalia, disorderly conduct and teen driving offenses. Using a restorative circle process, SCVRJP brings together offenders referred by the local courts, universities and high schools, who meet together with previous offenders and other community volunteers who have been impacted by these issues. A volunteer circle-keeper facilitates a focused discussion to present information to participants and to share a variety of perspectives.

The process builds upon victim impact panels (VIP), a process in which victims and family of drunk driving accidents tell their stories to those caught drinking and driving. Often VIPs take place in a hall full of participants, with the victims telling their stories from a podium or stage. Kris Miner, director of SCVRJP since 2004, wanted to make the experience more intimate and meaningful. “We continued to call them panels at first,” she said, “but actually we ran them as restorative justice circles.”

Whether they address impaired driving, controlled substance abuse or underage drinking, the circles last about two hours. Each begins with an exercise in which people identify an important relationship in their lives and one thing about that relationship that is significant. Miner said, “I believe accountability happens within the context of relationships.” The exercise works as an icebreaker to help people in the circle get to know one another. It also grounds people by getting them to start off talking about a positive relationship in their lives.

The circle-keeper, a volunteer, then asks each of the participants to make a commitment to respect the circle process. After that, one of the volunteers – the storyteller – shares a story from their life experience. In an impaired-driving circle the story could be about someone hurt directly or indirectly by drunk driving. In a controlled-substance abuse circle, the volunteer storyteller might discuss their own struggles with substance abuse. Following this, the participants who have offended and the other community volunteers reflect to one another upon the story they’ve just heard. At the discretion of the circle-keeper, another go-around may allow people to discuss the reflections.

SCVRJP staff volunteers. Director Kris Miner is pictured in the back, third from right.The action phase follows, during which the circle-keeper asks everyone to make a public commitment based on the circle topic. For underage consumption of alcohol, the commitment might be to reduce consumption, not drink and drive or to track the amount of alcohol one consumes. For a teen-driving circle the commitment might be to wear a seatbelt or not to text while driving. Participants can also reflect on what they’ve gained or learned from the circle experience.

Miner and SCVRJP have facilitated literally thousands of circles over the past 10 years. In a January 2014 report issued by SCVRJP, “Evidence, Outcomes & Performance: 10 Years of Restorative Justice,” Kris Miner detailed the re-offense rates by year for each type of circle. The numbers of participants who did not reoffend has ranged from 84 to 96 percent. (Read the report.)

One participant in an Underage Consumption Panel said afterwards, “The personal stories of the volunteers made the issues real. It put things into a larger perspective.” A participant in a Victim Empathy Panel commented, “I liked most of all that there was no judgment placed on anyone, and everyone got a chance to speak.”

Miner writes, “In a public forum in December 2011, Judge Cicero, River Falls Municipal Court Judge, shared that the program reduces ‘frequent flyers’ (repeat offenders) – in her courtroom. She viewed the program as a community solving it’s own problems.”

Patrice Vossekuil, the IIRP’s Wisconsin affiliate, said that SCVRJP is exemplary in the state. She recently became president of the Dodge County Restorative Justice, based in Juneau, Wisconsin.

Vossekuil has done a lot of work to help schools implement restorative practices on a school-wide basis. She said, “In each county in Wisconsin there is some access to restorative approaches in juvenile justice as well as the adult offender system. A lot of the most successful programs had roots in northern Wisconsin where there are many indigenous tribes that gave restorative justice a huge legacy of success and tradition in the state.”

Miner’s work at SCVRJP continues the Native American legacy of the community getting together in circles to solve its own issues.