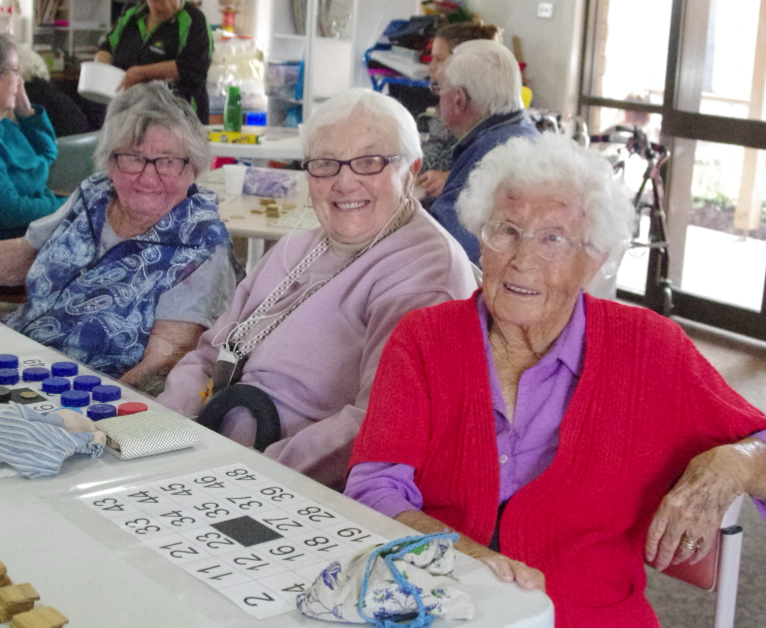 Maranatha residents posing happily during a game of bingo.Nursing homes, even very nice ones, tend to regiment life for their residents based on the rhythms established by the institution. But at Maranatha House Aged Care Facility, staff have taken a different approach to help residents “live life my way made easy," to paraphrase the organization’s motto. Restorative practices is helping Maranatha fulfill that mission.

General Manager Debra Wells says the idea is to “deinstitutionalize” the system and “put residents in charge.” Rather than having to live each day by staff routines, residents at Maranatha, in Wellington, New South Wales, a town and rural region of about 10,000 people located 225 miles from Sydney, Australia, are greeted with choices and conversations that allow them to express their needs.

Wells criticizes the institutional approach: “It makes aging a medical illness instead of a process that happens to all of us. At Maranatha, we’re having the right conversations with residents and their families instead of hiding behind red tape and bureaucracy.”

It all starts with “Individual Care Plans” written for each resident. Staff don’t create the plans for residents; the process is collaborative. Staff ask residents what time they want to wake up, when and where they want to have breakfast, lunch, tea and dinner and how they would like to spend their time. And when a resident wants to sleep in or would prefer not to shower one day, staff adapt by rescheduling meals or finding ways for residents to meet their needs another way.

The result is a great deal of flexibility for residents while meeting all the benchmarks set by the regulatory agencies. In fact, Maranatha recently received a perfect score during a surprise inspection.

“We passed the accreditation with flying colors,” Wells comments. “We don’t have any problems keeping to those standards and above.”

In fact, Wells thinks the industry standards are too low. She says that most large aged care facilities create bureaucratic medical plans for residents rather than the more personal, quality-of-life-oriented plans written at Maranatha.

Debra Wells, General Manager of Maranatha HouseShe credits her staff for making the whole process work. Take meals, for instance. “If you get the food right, the residents are so happy,” says Wells. “They often have nothing else to look forward to. But you have to have the right staff to deliver it!”

Restorative practices have helped Wells connect with staff and understand how to make Maranatha House a different kind of nursing home. Shortly after attending an IIRP Australia community forum, Wells decided to try taking a restorative approach with a staff member who criticized a resident for requesting a cup of tea after morning tea time had already ended. Wells decided to pull the staff member aside and ask her a reflective question: “How would you have felt if someone said that to you?” As a result of their simple conversation, Wells says the woman became one of the most compassionate caregivers on staff.

Since then, restorative practices have evolved at Maranatha and become much more than merely a set of responses to incidents. Wells holds weekly circle staff meetings to problem-solve and discuss how staff can do things better. For instance, they have taken time to strategize how the facility can avoid at all costs the need to use chemical restraints, a common practice with residents who lose control of their own behavior.

Beyond that, open lines of communication are maintained between management, staff, residents and families. It starts with Wells, who says she has an open-door policy where staff and residents feel free to speak to her at any time.

Staff extend that openness to residents and families, as well. Tracy Hornby, clinical registered nurse, serves as a liaison between residents who are ill and their doctors, pharmacists and families. She provides and shares information about conditions and treatments as well as options for palliative and end-of-life care.

“Because there’s a line of communication,” explains Hornby, “if someone tells a family something that is misinterpreted, we can call a family meeting. We invite them to give criticism, get it all off their chest, and then we can clarify what is happening.”

Connecting with families is “part of the holistic care we provide,” continues Hornby. “If we can involve family, we make them feel comfortable, welcome and that we are approachable. We are saying, ‘This is your loved one’s home and it’s your home as well.’”

She says staff become very close to families, and they go through a grieving process together when someone dies. Maranatha has even developed a ritual to honor the memory of deceased residents on the anniversary of their death by inviting family members to visit, reminisce and release a balloon.

IIRP Australia’s Terry O’Connell, who developed the IIRP’s Real Justice restorative conference script and has worked in the field for 25 years, says that leadership is the key to successful restorative practices implementation, and he gives a lot of credit to Wells. 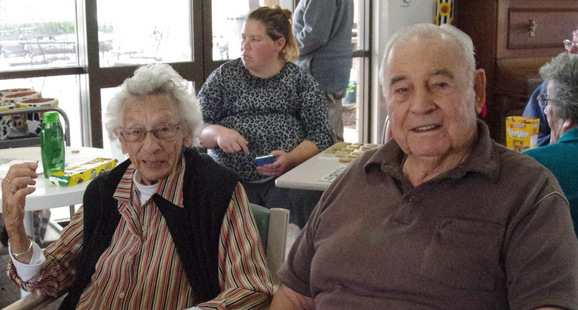 More Maranatha residents“The Maranatha story is full of stories of staff whose lives have been turned around because someone believed in them, and no surprise, Debra features strongly in their stories. The maintenance guy said, ‘I have been looking for this job for 30 years; I feel as though I matter.’ A number of staff started at Maranatha in relatively unskilled positions — laundry or kitchen hands — and progressed to other positions, some becoming personal carers.”

Marian Pool was an afternoon nurse. One day, Wells called staff to a meeting and asked if anyone saw areas that needed addressing. Pool spoke up because she “thought the spiritual needs were a bit short.” A few days later Wells told her, “I’d like to make you the emotional and spiritual support person.” Pool was shocked, but eventually she agreed and took a course to become an accredited chaplain, her current role at Maranatha. She now sits down with residents, takes them on outings and coordinates with staff to help residents find a sense of purpose beyond their personal care needs.

“Debra has a gift of vision,” comments Pool. “When she sees someone struggling in one area but good in another, she’ll put them in that. The person doesn’t see that in themselves, but they start to develop and evolve in amazing ways.”

O’Connell and colleague Lyn Doppler, a former school principal, first began working with Maranatha House in 2014 and have provided periodic orientation and training in restorative practices ever since. In November 2016, they met with staff and residents and produced a status report. They found that Maranatha staff have a very high degree of satisfaction with their work. Staff said they felt supported by management and that they “loved” the residents. All staff were “overwhelmingly positive,” and every staff member agreed that the likelihood of residents being verbally abused by staff was very low.

IIRP Australia will continue to work with Maranatha to make their restorative practice more explicit. As recommended in the report, the next phase involves “analyzing the existing practice so we can develop a clear rationale for everything that happens. One likely outcome would mean Maranatha being recognized as an industry leader, an exemplar of ‘best practice.’”

Meanwhile, O’Connell praises the work of Maranatha House. “Of course there are the usual issues and challenges. It is how they are handled that makes all the difference.”