Putting Theory into Practice for Teachers and School Staff

Restorative Care for Self and Others

The social discipline window (Figure 1) is a concept with broad application in many settings. It describes four basic approaches to maintaining social norms and behavioral boundaries. The four are represented as different combinations of high or low control and high or low support. The restorative domain combines both high control and high support and is characterized by doing things with people, rather than to them or for them. 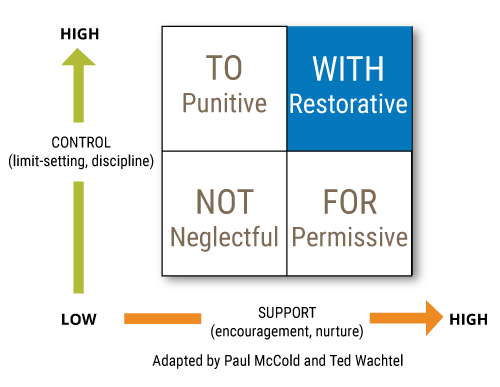 The social discipline window also defines restorative practices as a leadership model for parents in families, teachers in classrooms, administrators and managers in organizations, police and social workers in communities and judges and officials in government. The fundamental unifying hypothesis of restorative practices is that “human beings are happier, more cooperative and productive, and more likely to make positive changes in their behavior when those in positions of authority do things with them, rather than to them or for them.” This hypothesis maintains that the punitive and authoritarian to mode and the permissive and paternalistic for mode are not as effective as the restorative, participatory, engaging with mode (Wachtel, 2005).

The social discipline window, whose dynamics of low versus high support and control were originally modelled by the work of University of Illinois corrections researcher Daniel Glaser, reflects the seminal thinking of renowned Australian criminologist John Braithwaite, who has asserted that reliance on punishment as a social regulator is problematic because it shames and stigmatizes wrongdoers, pushes them into a negative societal subculture and fails to change their behavior (Glaser, 1964; Braithwaite, 1989). The restorative approach, on the other hand, reintegrates wrongdoers back into their community and reduces the likelihood that they will reoffend.

Putting Theory into Practice for Teachers and School Staff

Restorative Care for Self and Others