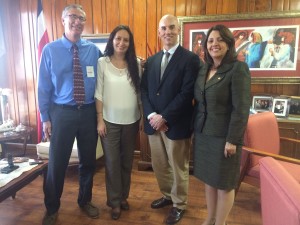 Magistrate Doris Arias Madrigal, a justice of the Costa Rica Supreme Court in San José, is spearheading the Restorative Justice Program. She believes that restorative justice can ultimately lead to a more peaceful and secure society. This is especially important in Central America, where conflict and violence are rampant, she maintains.

“We need to know that behind every file is a person,” Arias explains. “In a democracy, we have to allow citizen participation in the resolution of conflicts. Restorative justice addresses conflicts in a way that gets to their root.”

Magistrate Arias will speak about Costa Rica’s National Restorative Justice Program at the IIRP Latinoamérica Conference in San José, Costa Rica, June 6-7, 2016. (The Costa Rica Ministry of Justice is not a sponsor of the conference.) The conference is bringing together restorative practitioners from across Costa Rica, Central America and the world.

IIRP president John Bailie visited San José in February in advance of the conference and had fruitful meetings with Magistrate Arias and other members of the Ministry of Justice and the Ministry of Education. Many of them will be participating in the IIRP conference.

Commented Bailie, “Costa Rica has visionary leaders in criminal justice and education who are demonstrating how restorative practices improve the lives of children and adult citizens. Innovations in the courts and schools are repairing the harm caused by crime, improving learning and restoring community. Our upcoming conference will highlight these important developments.”

In 2015, IIRP Latinoamérica trained 90 judges, prosecutors and defense attorneys in restorative conferencing. The process brings together those who have committed crime, those impacted, and both their supporters, to talk about what happened, how they have been affected and repair harm that has been caused.

Youth may be eligible for restorative justice for most crimes; for adults it’s restricted to less serious crime. Yet the processes have been sanctioned for more infractions as they prove effective. The Ministry of Justice has approved these offenses: simple theft, aggravated theft, harm caused to a person, bearing a weapon illegally, drug use, reckless driving, and breaking and entering. A new protocol is forthcoming for restorative justice and domestic violence.

Cases are referred to restorative justice by prosecutors under a legal provision that allows for alternative conflict resolution. A team including a psychologist, social worker, prosecutor and defense attorney determines which cases are suitable. It meets with the judge before the conference to share information, and the judge facilitates the conference.

Program statistics are encouraging: a 93% participant satisfaction rate and an average cost of $640 per case, compared with $13,000 for cases that go through trial.

Magistrate Arias describes a moving case: A woman, driving under the influence of alcohol, crashed into a post. After being stopped, she got into a physical altercation with a police officer. Her restorative justice conference was a life-changing experience. It helped her understand how harmful it is to drink and drive, both for herself and her community. To make amends, she volunteered at an agency for people with cerebral palsy. This inspired her to become extensively involved with people suffering from this disability.

Restorative practices are impacting other aspects of life in Costa Rica, with training provided by IIRP Latinoamérica. NGOs, including Bien de Mujer (Women’s Wellbeing and Development), are employing restorative circles to improve relationships with women and children in San José’s slums.

Education is the next frontier. At the Blue Valley School, 90 teachers have been trained to employ circles. School counselors are also using restorative conferences to address behavior and build community. The Costa Rica Ministry of Education is exploring how to incorporate restorative practices to prevent violence and address student retention, reintegration and school success. IIRP Latinoamérica will be developing a Whole-School Change program for schools throughout Costa Rica and Central America.

The upcoming IIRP Latinoamérica Conference is a rare opportunity to see firsthand how innovative programs are improving lives throughout the region.

Says Lourdes Espinach, coordinator of the National Restorative Justice Program “Step by step we are accomplishing cultural change, training in different communities and implementing new policies. An international event like this will strengthen and support the work we’re doing and is really an honor for Costa Rica.”