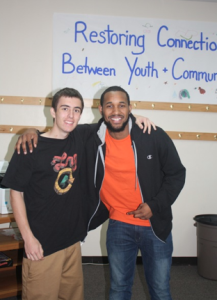 This is why the Aggression Replacement Training program is more effective with youth at CSF schools than with other Pennsylvania youth, theorizes CSF Buxmont Executive Director, Dr. Craig Adamson. “At CSF Buxmont schools, students are surrounded by a supportive treatment model that includes counseling and peer support, which creates many opportunities — all day long — to enrich what students are learning in the Aggression Replacement Training program,” says Dr. Adamson.

CSF Buxmont has been implementing the Aggression Replacement Training program at four of its schools, through grants provided by the Pennsylvania Commission on Crime and Delinquency (PCCD), to help students learn and practice interpersonal skills, effectively manage emotions, improve communication and develop better decision-making skills.

The 10-week, 30-hour Aggression Replacement Training® program consists of three components: SkillStreaming, Anger Control Training and Moral Reasoning Training. Starting with simple concepts and skills and building to a higher level each week, students explore external and internal triggers for their anger and identify their own anger situations, behavior and consequences. They perform exercises where they role play incidents (they are helped to stop before they re-experience real anger) and practice skills, including positive self-talk, anger reducers, exit strategies and healthy communication.

While students are learning how to better handle their previous anger experiences, they are simultaneously developing and practicing new skills to help them improve their relationships, from “Introducing Yourself” to “Dealing with Someone Else’s Anger” to “Standing up for a Friend” to “Arranging Problems by Importance” and “Making a Decision” (McGinnis, 2012). 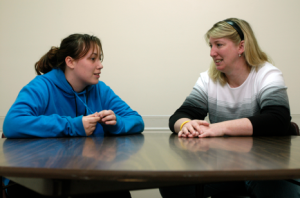 Aggression Replacement Training is enhanced in a restorative setting because it has natural applications that work with students to identify their own anger and help them make choices about their behavior, says Thompson. She adds, “Aggression Replacement Training is empowering – you work with students.” This matches the fundamental premise of restorative practices, which says that “people are happier, more cooperative and productive, and more likely to make positive changes when those in authority do things with them, rather than to them or for them” (Wachtel, 2013).

CSF Buxmont staff and students are sharing Aggression Replacement Training concepts and language outside school with students’ other support systems, such as family members and house parents of students in CSF’s foster homes, says Thompson. “This reinforces what students are learning and lets their support systems understand that we’re helping to empower these kids to take control of their lives, rather than letting their anger take control of them.”

Thompson is a big fan of the Aggression Replacement Training program, saying, “I love that it’s empowering: so powerful, yet simple. Kids develop skills and solutions, learning how to identify their triggers. They don’t wait until they’re acting out and then realize they’re mad. It gives them actual techniques: how to get themselves into a mindset to deal with a situation rationally.” 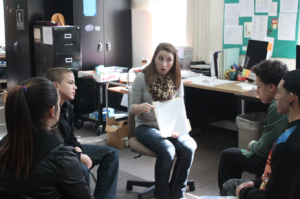 CSF Buxmont is a model program of the International Institute for Restorative Practices (IIRP) Graduate School, which has conducted research projects demonstrating the effectiveness of restorative practices in improving student behavior and school climate and safety. (See the Research section at SaferSanerSchools.org.) The IIRP is now participating in further studies examining the effectiveness of restorative practices in improving school culture, student behavior, graduation rates, and racial disparities in discipline, in conjunction with NIH and Rand Corporation; the Johns Hopkins University, Diplomas Now and Atlantic Philanthropies; and Rutgers University.

Wachtel, T. (2013). What is restorative practices? Retrieved from http://www.iirp.edu/what-is-restorative-practices.php