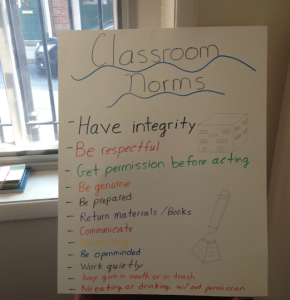 On the very first day at all Community Service Foundation and Buxmont Academy schools (demonstration programs of the International Institute for Restorative Practices Graduate School), students meet in circles to set “norms"(agreed-upon standards) for their school.

This starts off the school year with a restorative practice, doing things with students instead of telling them what to do. The thinking goes, if students set their own norms, they feel ownership and want to abide by them. They also feel responsible for holding their fellow students accountable to do the same.

Karen Engle, coordinator of the CSF Buxmont school in Bethlehem, Pennsylvania, USA, says staff engages students to come up with norms for their classroom, groups, lunch and school bus.

“This really empowers the kids,” says CSF Buxmont director of Day Treatment Rick Pforter. “There are five ‘Cardinal Rules’* that aren’t open for debate. As for the rest, we tell the kids, ‘It’s up to you how you want your school to run.’”

“They focus on all the norms on the first day,” says Engle. Returning students help new students with the process, explaining what norms are and why they are important to help the school function well.

The students explore such questions as, “How do you want your groups to run?” and “What will enable you to have a successful class and empower you to learn?”

Then the students take part in a problem-solving group where they brainstorm a list of possible norms. (Brainstorming means that students don’t judge each other’s ideas.)

After they’ve come up with a list for each norm, the students vote on which norms to use. “It has to be unanimous,” says Engle. “So they talk about it quite a bit before voting.”

When the norms have been decided the students work together to create posters of them to hang up in their classrooms.

When a new student enrolls, an experienced student will take them under their wing and explain the norms as part of their orientation.

If problems crop up later in the school year, the students can revisit their norms.

“We’ll say, ‘You’re not following your norms. You need to start this over.’” Says Pforter.

“They’ll rip up the poster, brainstorm ideas and vote again, and it has to be unanimous. So if somebody doesn’t follow the new norms, their fellow students can say: ‘Yo dude, you just came up with these norms three days ago, and you’re breaking them already. Come on!”

1. No drug or alcohol use or suspicion of use.

3. No violence or threat of violence to people property.

4. No leaving school premises without permission.