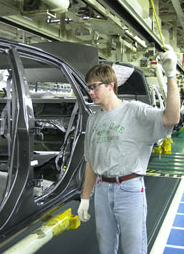 Photo of someone pulling an Andon Cord from NYTimes blog

Jeffrey Farr, a 2012 IIRP graduate and English teacher at an alternative school using restorative practices, sent me a link to a piece titled "Case In Point: Avoiding Martial Arts Moves by Pulling the Andon Cord." In the subject heading of his email Farr wrote: "RP [restorative practices] by any other name would still be RP . . . " I like this idea of finding relevant connections and identifying practices that could be considered restorative wherever they may be found.

The piece talks about a mother using a sort of impromptu conference. She asks her sons, "What happened?" and then engages them in a process of what can be done to make things right.

I thought the piece was particularly interesting because it uses a metaphor from industry – "pulling the Andon cord," a procedure originating in Japan where factory line workers stop the production line to resolve a problem. The piece's authors, Elliott Weiss and Rebecca Goldberg, also reference "Continuous Improvement (CI)," an engineering and business term I recently heard about at IIRP's World Conference during a talk given by John Graham Macdonald of Hull, England titled “Restoring Your Bottom Line: Using RP in Management.” Macdonald said that CI is itself a restorative practice, because it's about engaging the whole company in continuing to improve their methods. At the same time, he believed that restorative practices as a whole could help businesses overcome institutional resistance to culture change, which CI does not itself address.

The example of how the mother addressed the problem with her children from this article demonstrates how these ideas from business and industry also have implications for family relationships:

The scenario: Rachel is needlessly interrupted in the shower when her two sons, Jackson, 8, and Wyatt, 6, scuffle over a tricycle. The boys’ inability to independently take turns is both an impediment to their social development and is what Rachel considers to be a “defect” in her family’s normal operations.

The resolution: Rachel steps in and calls a family meeting in a manner reminiscent of “pulling the Andon cord” — a signal that factory employees use to indicate a problem or defect on the production line. This action stops production, calls a supervisor and initiates a problem-solving investigation at the actual place that a defect occurs. ... She calls the boys into the backyard, the scene of the dispute.

“Let’s figure this out,” Rachel says to the boys, “Tell me what happened.” They explain that they cannot determine who should play with the contested toy first. ... “You boys will be living together for the next 11 years,” Rachel says. “There will always be things that there is only one of. Let’s figure out a system now for taking turns so you don’t have to push each other next time, okay? Will you help me?” The boys nod. “Do either of you have an idea for deciding how to share?” their mother asks.

“That’s a great idea! How can you decide whose turn is first?” Rachel says.

Jackson weighs in. “We can flip a coin!”

The children decide to hide quarters around the house and yard so they are easily accessible in the event of a disagreement, and to permanently assign themselves a heads and tails designation. They also agree on 15 minutes as a standard length of time for a turn. That way, if one boy really wants the toy and it isn’t his turn, he can watch the clock — ideally without detracting from his brother’s enjoyment.

“Great problem-solving, guys,” says their mother, proudly. “Now, here’s the most important part. This idea will only work if we all agree to participate. Why don’t we try it for a month? If a month goes by and we don’t think this is working, we can think of something else. All in favor say, aye!” The boys raise their hands and commit, at least in theory, to the newly improved process.

Read the rest of the story at the Washington Post blog: Case in Point: Avoiding martial-arts moves by ‘pulling the Andon cord’