Here is the second in a series of pieces about IIRP’s 15th International Conference, Building a Worldwide Learning Network, that took place August 1-3, 2012. I’ll be writing about some of the great sessions I attended, beginning with one titled “Restore with a Smile: The Provocative Approach” presented by Jan and Laurien Ruigrok from the Netherlands. 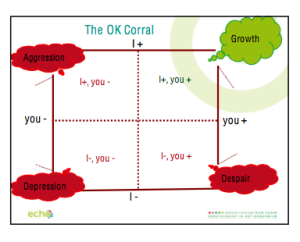 As you might be able to tell from the title of this workshop, Jan’s approach was unconventional. When I arrived at the session, everyone was seated in rows of chairs, but once it began the chairs went to the side and the room was turned into a play space. Jan said that Rule #1 of the provocative approach is: “Get yourself into the laughing state.” So when someone came in the room a little bit late, Jan asked us all to jump in the air with our hands held high in imitation of the well-known Masai jumping greeting. We were laughing by that point.

Jan also showed us his version of the social discipline window, which he’d modified slightly (see figure). He put it in terms of status and self-esteem. If both “I” and “you” believe ourselves low in status, that puts us in a “depressed relationship.” If “I” put myself above “you” then it’s an aggressive relationship. If “I” put myself below “you” that puts me in a state of despair. But if both of us have a positive view of ourselves, that puts us in the position of growth. That’s the box we normally call the “with” or restorative box. 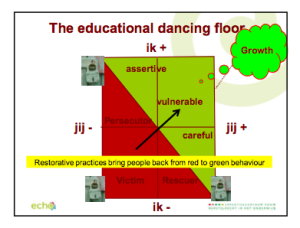 Incidentally, Jan made a similar window into a large mat that was laid out on the floor - he called this the "educational dance floor." When he wanted to demonstrate different perspectives, he stood in different boxes as he talked about the points he wanted to make. This had the effect of reinforcing in a subtle way his message.

The next thing that happened was that everyone was asked to blow up a balloon that Laurien handed out to us. Our job was to keep all of the balloons in the air. It was chaotic, but fun, of course. Jan then asked us to describe the dynamics of the exercise. Besides being a general warmup, he asked us to look at things from the balloon’s perspective. We agreed that as teachers – or social workers, e.g. – we were doing all the work of keeping the balloons afloat. The balloons had no responsibility for themselves! Inevitably, most all the balloons fell to the ground. Jan equated this with doing things “for” people.

Next we paired up. Only one of the two people had a balloon at this point. The one with the balloon had to keep it away from the other person, while that person’s job was to try and take and pop the balloon. This also led to a chaotic situation, very playful, in which the balloons started popping all over the place. After this was finished, we talked some more. The lesson Jan wanted to impart was that the “teacher” with the balloon created a situation where the “student” had to work to achieve something. Even though we seemed to be taunting the student, eventually they did succeed. In a way this was more respectful because they had to figure it out for themselves. The challenge was appropriate.

Jan then had us do other exercises. Again in pairs one person acted the role of student and the other teacher. He instructed the students to complain about something like “I don’t have a pencil.” The teacher answered, “Oh, that’s wonderful!” and continued along the lines of how great this situation was. I was the student for this exercise and it was really weird how I felt when this was said to me. It was disarming and I wanted to laugh. It really opened me up.

Then we did it again, and the teacher was to answer the complaint by convincing the student how terrible the situation was. I was the teacher, and I wasn’t sure I totally understood the point. It seemed cruel. On the other hand, the student eventually got the idea that the teacher wasn’t going to solve the problem for her and would just have to cope with it herself. These were two examples of how the provocative approach can reverse expectations and help someone see a situation for themselves and hopefully empower them. 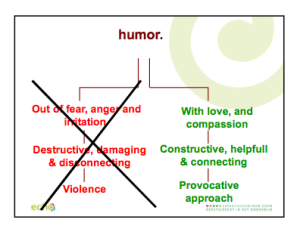 This led to a discussion about the use of humor in general. The chart to the side sums up the discussion. Some humor can be harmful. But when it is done with an open heart, humor can be a very positive force.

I found the workshop so fascinating I asked Jan about “Provocative Therapy” and have since ordered and begun reading a book on the subject. I’d like to end this entry with a couple passages from that book, titled simple Provocative Therapy by Frank Farrelly and Jeff Brandsma (Meta Publications, Capitola, CA: 1974), which I think will resonate with restorative practitioners.

In the first passage Farrelly was dealing with a patient who had been writing obscene letters to the secretary while in a mental hospital. When Farrelly confronted him, the offending patient said, “You can’t hold me responsible – I’m mentally ill.”

Farrelly writes, “It became clear to me that here was a ‘certified, mentally diseased’ patient who supposedly had ‘lost touch with reality,’ a patient who had very accurately interpreted the central core message of my training (and virtually the entire field) – that the emotionally and mentally disturbed can’t help it and were not to be held responsible for their actions, but instead were immune to the usual social consequences for their behaviors.” (p. 11)

Farrelly refuses to accept this assumption and instead he tells the patient how “pissed off” he is by the guy’s actions and that he will indeed hold him responsible. And wonder of wonders – for the remaining months the guy was in the ward he wrote no more obscene letters to anyone!

To me, that demonstrates the power of those “affective statements.”

The second passage that has jumped out at me so far reads: “The provocative therapist takes the operational stance ... that to hold people responsible for their actions gives them hope and dignity, and says in effect to them, ‘You may be guilty, but you can choose and change and your whole life can be different.’” (p. 39)

Thanks to Jan and Lorien for presenting such a fun and positive session!