Last week I linked to a blog post by Photographer Matt Roth about City Springs Elementary/Middle School in Baltimore and their successful use of Restorative Practices for dealing with safety issues. Today I'm reposting a piece about the Baltimore Curriculum Project, which discusses the history and context of their adoption of Restorative Practices. The original post can be found here. 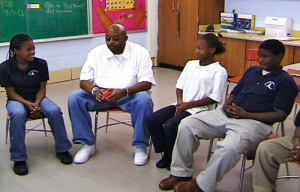 "RP was just what we were looking for to improve our school climates," said Dr. Berkeley.

Restorative Practices uses restorative circles and conferences to help students with conflict resolution; teaching them vital skills that will help them succeed in college, career, and life. In addition to addressing misbehavior, Restorative Practices develops life skills and channels students into productive discussions of issues that concern them.

"RP has been critical to helping our schools become safe havens for learning. Fourteen years ago, before BCP became involved, City Springs was extremely chaotic. Kids didn't stay in class or even in the building, but did as they pleased," said BCP President Muriel Berkeley.

"When BCP came on board, students learned new rules; rewards were put in place for following the rules; and everything improved. Several years later, BCP staff realized that students behaved only if the adults were watching. Students hadn't internalized the behavior. Then we heard about RP: a way to teach kids how their actions affected their classroom, their school and their neighborhood."

In 2006 BCP implemented RP at City Springs School, Collington Square School and Hampstead Hill Academy with the support of a $42,000 grant from the Open Society Institute - Baltimore and two $20,000 grants from The Goldsmith Family Foundation.

The International Institute for Restorative Practices (IIRP) provided training for all teachers and administrators. That same year BCP brought on OSI Fellow Tonya Featherston to oversee the RP implementation.

"That's why BCP works with schools to identify and implement effective education strategies like Restorative Practices, Direct Instruction, and CHAMPS."

The impact of Restorative Practices has been impressive

"When BCP brought Restorative Practices training to City Springs School six years ago, many teachers were a bit skeptical about what impact this school-wide approach to discipline would have on student behavior. It seemed almost too simple to address our challenges," said City Springs School Principal Rhonda Richetta.

"To say we have experienced remarkable results is an understatement: in just one year, suspensions plummeted from 86 to 9!"

What the Students Say

"I like Restorative Practices because it clears stuff off your mind and keeps you from fighting. If you fight with someone you can talk it out," said City Springs fourth grader Antonio Wilson.

"If you're stressed you can talk it out and talk about your feelings. Restorative Practices helps you get to know your classmates better," said City Springs fourth grader Kenyon Park.

"When people are going through stuff at home, you get ideas on how to cope with family members," said City Springs seventh grader Sherie Turnage.

The influence of Restorative Practices continues to grow at BCP's four schools and beyond. Dr. Berkeley and Principal Richetta were featured speakers at the 2011 IIRP Summer Symposium; Hampstead Hill Academy Principal Matt Hornbeck recently hired a full-time Restorative Practices expert to take their school to the next level; and City Springs School is in year two of a school-wide RP implementation that will etch the process thoroughly into the school's culture.

"Our vision extends to helping create a Restorative Zone that encompasses the school and the entire neighborhood," said Principal Richetta.

This may sound like a fantasy; but it is a reality in Hull, England where IIRP is bringing Restorative Practices training to the City's 23,000 professionals and volunteers who work with children and young people.

"Just imagine if we could bring Restorative Practices to all of East Baltimore!" said Dr. Berkeley.