Here's piece #3 in this continuing series on some of the great workshops I attended at IIRP's 15th World Conference. (I would note that some of the power points from various sessions have been posted on the IIRP web site - click here.) 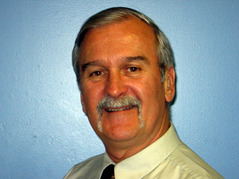 Chuck Saufler, who is based in Maine, was a guidance counselor and now trains and consults with schools and communities. His focus, according to his Safe Schools for All web site, has been "to reduce bullying and peer aggression in children and adolescents through the implementation of restorative practices." His session at the conference, “Connecting Restorative School Practices to Brain Research and Bullying Prevention,” struck me as significant for establishing a scientific foundation for certain aspects of restorative practices.

After introducing himself, Chuck showed a YouTube video demonstrating the “Still-face Experiment” (see video below). In this experiment, a mother of a child first demonstrates her child’s full engagement when she talks to her, smiles, and responds with positive affective facial expressions. Then the mother turns on a dime and presents a nonreactive face to her child. The child tries every trick to get the mother to engage but then breaks down and cries. This set the keynote for Chuck’s talk – how from a very young age we respond best when those we rely upon engage and connect with us.

Chuck said the video also demonstrates the concept of "affective resonance" – the fact that our brains mirror and respond to others and our surroundings. School climate, the feeling you get when you enter a school, therefore sets the brain in an attitude that has an impact on behavior as well as learning. 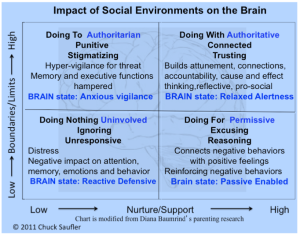 For those familiar with the social discipline window, Chuck presented an alternative model from the point of view of a person responding to the environment around them, resulting in various mental dispositions. In the NOT box – low support, low control – an individuals develops a “reactive, defensive” outlook. In the TO box (high control but low support) an authoritarian zone, a person will develop a posture of "anxious vigilance." Where things are done FOR a person (high support, low control) they will develop a “passive, enabled” outlook and seek attention through negative behaviors.

Chuck noted, “The brain is an anticipating machine,” and that these outlooks establish what he called a “premature cognitive commitment.” This means people can't really think but instead operate on autopilot with preset reactivity. He also said that when a person is threatened they cannot focus. It is only in the WITH box, the restorative range, that a person can adopt and maintain a disposition of “relaxed alertness” necessary for quality study and learning.

Chuck spoke of one research report after another, tying together various strands of research to build his case for restorative practices as an antidote to many problems faced in schools, from bullying to poor academic performance. He talked about a study – the Youth Voice Project – that interviewed 13,000 students to talk about bullying from their own perspective. Chuck discussed a report called the Wingspread declaration (2004) which related school connectedness to academic success. He mentioned a DANA Foundation report that made a case for the positive effect of the arts in schools. I believe he implied that the arts help students get in touch with their emotions, which is a crucial component of restorative practices.

I like that Chuck littered his talk with so many useful strands of information and leads, including books, articles and web sites. He didn't have time – just 50 minutes – to go in depth into all this information. But I thought the effect was positive, in that Chuck wasn't doing the work “for” us, but rather giving us a lot of leads we could followup on ourselves.

Part of why I found the whole talk so fascinating  was because I believe RP requires an empirical foundation which can help act as a unifying force from which to reach out into the widest variety of fields.

A piece by Chuck titled "School Climate, the Brain and Connection to School" can be downloaded here (PDF).

The slideshow from this presentation can be downloaded here (PDF).