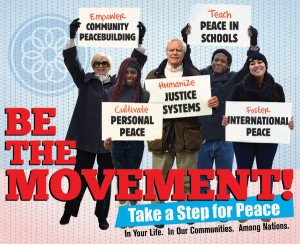 As the restorative practices social movement gathers steam in schools, justice, communities and beyond, practitioners, academics and advocates are looking for new ways to connect and work together to common purpose.

The Peace Alliance, a national grassroots advocacy group based in Washington, D.C., that promotes practical methods for reducing violence, transforming conflict and enhancing cooperation, sees as one of its functions to facilitate these cross connections.

Molly Rowan Leach, who has been instrumental in this effort, is the restorative justice fellow for the Peace Alliance. Starting in 2011, Leach began facilitating conversations with practitioners and theorists throughout the world on her syndicated webcast and radio show, Restorative Justice On the Rise. The program explores trends, ideas and stories that amplify and explain restorative practices to a wider audience while allowing that audience to participate in the conversations.

For the past three years, Leach has worked directly with the Peace Alliance and her role has expanded from media person to network builder.

“Relationships and the importance of building them are key principles of restorative practices.” Says Leach, “I have a unique role as an individual and as a part of an organization, the Peace Alliance, which is striving to build cross-disciplinary connections in the field.”

The day I talked to Leach she had interviewed and recorded a conversation with State Representative Pete Lee, of Colorado, who has spearheaded groundbreaking restorative justice legislation in the state. She was planning to share the recording, in which Lee discusses challenges and hurdles in the legislative process, with legislators, practitioners and advocates in Massachusetts who are currently working to enact statewide legislation there.

“Everybody I talk to is working on the ground as practitioners or doing academic work,” says Leach. “My work with media and relationships help provide some form of cohesion and web-building across states and different organizations.”

Molly Rowan Leach doesn’t see herself as a restorative practitioner. Yet she’s had over 150 hours of conversations with practitioners and theorists for her Restorative Justice on the Rise radio and webcast. Leach says, “I see restorative practices as a lens for my life.” And in fact she uses circles with her nine-year-old son.

Before a sleepover birthday party for him and eight friends, Leach kicked off the event with a circle. Everyone shared something about themselves, their plans for the party and what they would do if anything went wrong. The nine boys made it through the night without any problem, and they had a lot of fun!

Since January, Leach has begun to facilitate a monthly National Restorative Justice Advocacy conference call co-presented by the Peace Alliance and the National Association of Community and Restorative Justice. Open to anyone in the field, the call provides space to brainstorm grassroots advocacy and legislative goals, to share tools and ideas and to network.

Kahn says that in addition to the platforms Leach is developing to foster communication, “We have a network of 60,000 folks across the country who receive action alerts using an internet-based system to target information about bills, hearings and tools for directly contacting state legislators.”

A current priority supports passage of the Youth PROMISE Act (Prison Reduction through Opportunities, Mentoring, Intervention, Support, and Education) in Congress. Recent action alerts invite people to call and email their senators and house members to encourage them to co-sponsor the bill and to write letters to the editor of their local newspapers. (View recent action alerts and sign up for the Peace Alliance email list.)

The Peace Alliance also supports 22 community action teams: “groups of citizens who work in a more sustained and consistent way to develop relationships with members of congress and the media all across the country, from Florida to Alaska, California to New York, Texas, Ohio, Indiana and Illinois,” explains Kahn. Additionally, eight colleges have active chapters of the Peace Alliance and are active in the “Ban the Box” campaign to remove questions about incarceration on job and financial aid applications.

“We try to be a conduit between the people who care about these issues and a highly effective means to create social change on a broad scale,” explains Kahn.

The Peace Alliance has recently launched a new initiative called “Be the Movement,” which maps out five cornerstones to show the general public what peacebuilding looks like in different areas. These include “teaching peace in schools,” “humanizing justice systems,” and “empowering community peacebuilding.” The remaining two cornerstones examine “personal peace” at the individual level and “international peace” at the macro level.

Kahn says, “I consider restorative justice practices as perhaps the most promising and rewarding peacebuilding tool to advance and promote.” He attributes this to restorative practices’ flexibility to be adapted to “school settings, juvenile justice settings, even adult settings, if accompanied with policy changes.” Adds Kahn, “There’s a wealth of statistical information to show the practices reduce violence and recidivism and save money.” (Download a one-page fact sheet produced by the Peace Alliance and the National Association for Community and Restorative Justice, NACRJ.)

All in all, Kahn’s advice to advocates comes very close to the essence of restorative practices. “It’s largely all about relationships,” Kahn says. “The quality of your connection with someone, the experience of that connection, is literally the substance of the movement and determines the kinds of results you’re going to get. Pay attention, stay present, have a good time.”