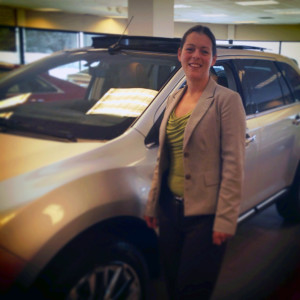 IIRP Graduate Beth Alosi, '11, applies restorative practices in her coaching work with Ford and Lincoln car dealerships.Beth Alosi was working as a teacher and taking courses towards a master’s degree in restorative practices in education from the International Institute for Restorative Practices (IIRP), but unbeknownst to her, the future pointed to a job with Ford Motor Company. Her father, Ed Alosi, had always worked in auto service, training and consulting, and Beth, while growing up, spent time with him at dealerships and even held a job for four years detailing cars. Beth often talked to her father about the restorative practices she was learning, and they both saw something in common between Beth’s work teaching and engaging adults in literacy and workforce development programs and Ed’s consulting work where he had to engage auto dealers to make positive changes in their businesses. When Ed returned from an event outlining Ford’s new Consumer Experience Movement (CEM), a program for revamping customer service, it all came together. In the words of a Ford VP, “The Consumer Experience Movement is about helping dealers focus on the people aspect of the business — not just what we do but how we do it. It all comes down to how you treat people.”* Ed said to Beth, “It’s restorative practices!”

Fast forward to 2014, and Alosi, who graduated from the IIRP in 2011, has begun her second year as a CEM coach helping nine different Ford and Lincoln dealerships improve customer relations by focusing first on staff relationships in their stores. Said Alosi, “Most consultants come in, make observations and then they’ll prescribe something. We go in, we do an employee engagement survey, we learn about the store. A lot of it is about operating on a philosophy of building relationships based on respect, having trust, and giving people control over things that affect them.

“I begin by asking storeowners, ‘What are your strengths as a leader? What are your challenges? What keeps you up at night?’ I have to find out about their goals to help them develop their own vision of the future. You have to be in a constant process of keeping your mouth shut and allowing the dealers and managers to set the priorities. As a coach, I need to use powerful questions, focusing on asking, not telling.”

Because Alosi doesn’t come in with a preset agenda, the outcomes of the coaching process vary a lot. In one store, department managers began meeting together for the first time. As a result, they’ve started to see how their departments affect one another. Salesmen, for instance, often rush to get in sales before the end of the month so they can get paid, but this leaves the office staff with the extra work of tidying up hastily completed paperwork and makes them look like they aren’t doing their jobs. At any given time, customers and team members can be negatively impacted by competing goals and lack of communication between departments. With managers now talking and meeting, they are moving toward a shared understanding of the overall store operation while developing empathy towards each other. The storeowner has also begun to institute all dealership meetings so information can flow freely and he can articulate his vision for the store to everyone in the company.

Another store manager made a choice to change the pay system in the service department so that advisors get paid as a group rather than individually. The goal here is to move that department toward a supportive rather than competitive system of improving customer service. It’s not a panacea but part of a process of determining desired outcomes and ways to measure if changes are successful. Alosi said, “Now some people say, ‘I work harder, he works less.’ ” The next step involves helping managers connect with workers, to get them talking and developing a culture based on intrinsic motivation where people want to support each other to achieve the goals of the service department as a team.

“Managers must not be afraid of failure,” Alosi said. “Vulnerability, flexibility and clear communication are key factors in making changes. Leadership development is a key target.”

Alosi believes that restorative practices is fundamentally a leadership model consistent with the current leadership exemplified at Ford. According to Ford CEO biographer Bryce Hoffman (2012):

[CEO Alan] Mulally blew through the Glass House [Ford’s Detroit headquarters] like a Kansas cyclone, shaking hands, memorizing faces, and leaving everything changed in his wake. He would stop people in the hallway and ask them what they did and what he could do to improve the company. Instead of eating in Ford’s famously posh executive dining room, he took his lunch in the company cafeteria. He stood in line and chatted up accountants. He would sidle up to a table full of sales analysts and ask if he could join them. For Mulally, an open door was an invitation to pop his head in and see what was going on inside. (p. 103)

Like Mulally, Alosi listens to and respects those she works with. She’s not trying to pretend to be an automotive expert. She wants dealerships to identify their own strengths and opportunities. and to engage staff, to share knowledge and ideas and capitalize on what they’re already doing especially well. Alosi said she has to practice what she preaches: “I constantly reflect, ‘Where am I on the social discipline window?’ To, for, checked out? Coaching is with people, that’s what makes it restorative.”

CEM is based on the values of respect, inclusiveness, trust and relationships, which Alosi says are completely consistent with restorative practices and the concept of fair process. To these values Alosi adds two concepts — meeting needs and repairing harm — drawn from the foundation she gained in restorative practices at the IIRP Graduate School.

Alosi recently showed up at a store and the general manager (GM) was excited to tell her about what he’d just done. The used car sales manager and the general sales manager, who had shared an office for years, were feuding. Tensions in the office were high and affected everyone. The GM had tried talking to each man individually and telling them to put their problems aside, but nothing got better. Finally, he brought the two men together and addressed the issue head on. He said, “There’s a lot of tension. As soon as one of you walks away the other is bitching. I’m tired of it, and I don’t want to be in the middle. How did this problem get started?” Then he got quiet and let the two men talk.

It turned out that one of the men had lied to the other when asked about something in his personal life. The man who had been lied to couldn’t forgive the other because he felt betrayed. The one who lied said he felt ashamed — that was why he lied — and he apologized for it. The GM commented that people are people and that he hoped the two could now get past this, which, in fact, they did. Two days later, when Alosi arrived, the GM reported that the climate in the office was 100 times better. The men were talking and joking again after six months of mounting tension!

Alosi believes that companies cannot make their targets and obtain the results they want if they neglect the emotional aspect of the workplace. A salesman in one store missed his target for the month. The manager approached him and said, “You’re off track, what’s going on? How can I help you?” He said, “I just found out my daughter’s in a lot of trouble. My head is just not in the game.” The manager responded, “I know what you mean. We want to leave our baggage at the door, but sometimes we can’t. I remember when my dad died and how that affected me. Here’s some strategies I used then to cope at work.” Alosi says the manager could have just fired the salesman, but then he would have lost a resource. Instead he reached out and made a connection. Alosi, and CEM in general, operate on the premise that when you humanize the work environment the positive changes will ultimately improve sales and customer service.

The impact of CEM transcends the workplace. A service manager who was known for his nastiness and frequently yelled and cursed at workers, made a transformation unlike any Alosi had ever seen. He learned how to be a better manager by being respectful to his employees and listening to them instead of shouting. His workers say he’s a completely different person now. The change has affected his whole life. He said, “It’s really helping me at home with my kids and my wife.”