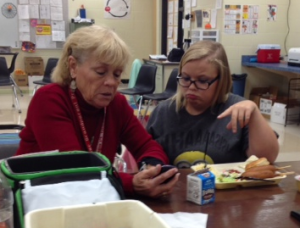 Last school year, staff at Community Learning Center (CLC), a school in Winfield, Kansas, for students at risk of dropping out of high school, successfully managed a major move by employing restorative practices with students.

“Our students loved that we had always been a separate off-site private school away from all the perceived problems of the other place – the big public high school,” says CLC director Jennifer Muret-Bate, who holds a Master of Science from the International Institute for Restorative Practices.

But in 2014, the school district decided to incorporate the CLC program back into the main school building. Muret-Bate presented a case study about the restorative process they used at the 2014 IIRP World Conference in Bethlehem, Pennsylvania.

“The students were scared to go to the new building,” says Muret-Bate. “To the students who had been used to this small, safe place, it felt very threatening to go back to the place where they had been unsuccessful, where people didn’t like them and looked at them funny, and where they had all these problems.”

So staff turned to restorative practices, and they adopted a “fair process” approach with students. The notion of fair process was coined in a Harvard Business Review article (Kim & Mauborgne, 1997) to describe how best to produce effective outcomes in business organizations when managing change. The three key elements of fair process are engagement, explanation and expectation clarity.

“We did a lot of circles,” explains Muret-Bate. “Students were able to ask questions, share ideas and come up with solutions to different problems, a lot of them issues that the adults had not foreseen but that were very important to the kids.” 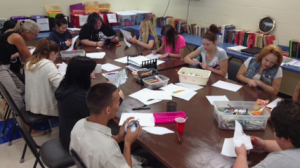 CLC students work on an art project in a class in their new building.

In these group conversations, staff engaged students, who were the stakeholders most affected by the changes being proposed by the school district. “We did a lot of talking about lunch and snacks and things like that,” says Muret-Bate. “This made a really big difference to the culture of the program, but we wouldn’t have thought of them if we hadn’t been able to involve students in the process.”

Later, after considering student input and all the other logistical considerations, staff provided an explanation to students of the decisions they ended up making and why. They also explained areas where CLC staff did not have the power to do things students wanted because of the other school’s rules and layout. For example, students lost their “open lunch” in the move, for reasons beyond staff control. However, staff did take student input into account when deciding how to adapt to this change.

Finally, staff provided explanation clarity. Muret-Bate says they informed the students, “Now that we’re moving, here’s where we are, and here’s what we have to do.”

But the process didn’t end there. After the move, staff continued to check in with students. “We had a whole lot of follow-up conversation in circles, conferences and casual chatting: ‘How are you doing? What’s working and what’s not working? What can we fix, and where do we have to simply adapt?’”

Two months into the new school year, staff checked in formally with students and parents at family conferences. “The overwhelming response,” says Muret-Bate, “was that everyone said it actually feels very much the same. Everyone felt that because we had continued with circles and with the traditions that are our culture, the program is pretty much the same.

“So far, the important parts about who we are and how we talk to each other have been really the same – good and restorative – and students feel it’s the same kind of program.” The main difference, adds Muret-Bate, is that “now the food is better.”

By really listening to students and trusting that restorative processes could achieve positive outcomes, staff helped produce a happy ending for everyone.