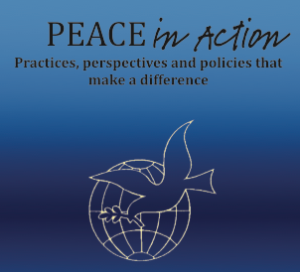 Terry O'Connell has a chapter, called "Conflict and Relationships: Restorative Ways of Building Community," in a new book titled Peace in Action: Practices, Policies and Perspectives That Make a Difference, edited by Raymond John R. King, Victor MacGill, Roger Wescombe. The book is a collection of papers from the Rotary Peace Communities International Conference held in Wagga Wagga, New South Wales, Australia, in 2012. Terry is director of Real Justice Australia, and he developed the Real Justice script and the restorative questions. I've posted three excerpts here, including the introduction and two anecdotes taken from Terry's influence on people adopting restorative practices for use in the business world.

Introduction
Recently I ran a restorative session for about 120 Year five students (aged 10-11) in a primary school. The initial discussion focused on their relationships with one another and their families. Most said that friendships were the most important part of their school experience. I posed the question ‘If today was the last day of your primary schooling and as you looked back you discovered that in all the years you were together as a group, you had never had a conflict, a fight or disagreement, what would that be like?’

On cue, a young male student said, ‘Boring’. This caused much laughter. A young female student with an anxious look on her face then put her hand up and said, ‘It wouldn’t be very good at all. How would you know how to build relationships?’ - That was a very insightful comment for one so young. What this young student shared was a simple reminder that conflict is a normal part of our relationships and that what influences these relationships at a personal, community and societal level is how we deal with these conflicts.

This paper looks at peace and conflict through a ‘restorative’ lens and demonstrates how this approach offers some practical techniques for dealing with conflict in healthy and constructive ways. The paper is written in two parts. The first part examines the evolution of my thinking and practice from dealing initially with victims and offenders to the development of an explicit practice framework that has been shown to have application in most areas of human interaction. This includes an explanation of its philosophy and rationale. The second part looks at some practical examples of how this practice has been used to successfully deal with a broad range of incidents. The final reflection is on how this practice can be used to pro-actively build strong relationships and healthier communities.

Customer Service Complaints
In early 2005, I was rushing to catch a plane to Perth from Sydney. As I arrived at the airport counter I was greeted by Pauline, a Qantas representative, who said, “I remember you from Bangor Public School. You ran the parent evening.” She then pulled out the restorative card from her top pocket and said, “This helped me get this job with Qantas.” I asked her to tell me how that happened. Pauline talked about how she was immediately attracted to the restorative questions. She explained that working as a service complaints officer with a large company, she struggled with those customers who were aggressive, offensive, unrealistic and demanding. Normally she would ask what happened and then she would find herself arguing about service policies or responding to something offensive the caller said. She said most calls had unhappy endings. She thought the restorative questions might be helpful. So the following day, armed with the restorative card, she used it with the first service complaint. She said it was a completely different experience as it was so easy asking questions that the caller was able to answer. Her real surprise was in response to her question ‘what would you like to see
happen from here?’ The caller replied, “Nothing. I just wanted to ring up and talk about it. Thanks for listening.”

Pauline said that this success completely changed the way she deals with customer complaints. This came to her supervisor’s attention because of the number of complimentary calls the supervisor had received about how she handled customer complaints. As for getting the Qantas job, she explained that in her interview she was given a scenario involving having to notify a customer of a cancelled flight and then dealing with the many disgruntled passengers. Pauline said she produced the restorative card and explained how the questions would be used.

Workplace Safety Issue
Robert is another good example of this. Like Pauline, he attended a restorative parent session in a primary school. Robert was the managing director of a medium sized manufacturing company. A serious safety incident involving an employee, Joshua, was brought to his notice. An official investigation took place. It found that Joshua had engaged in an unsafe work practice that could have resulted in serious injuries or even death. Robert had to determine what sanction was needed and in view of the serious nature of the incident, he was considering dismissing Joshua. He scheduled a meeting with Joshua, his supervisor, section manager, union representative and company lawyer to formally discuss the incident. This was scheduled for a Wednesday afternoon.

On Monday evening of the same week, Robert attended a parent session that I was running. He approached me immediately after the session and asked for some restorative cards. He explained that he now had a very different way of looking at how to deal with the workplace safety issue. He was taken by the idea that instead of looking just for the facts and having someone to blame, he could change the focus of the conversation to the impact of what had happened and what might be learned from this. He said it made so much sense. He now realised that isolating the employee from the workplace context was really counterproductive as it meant that there was little opportunity to understand the pressures and influences behind the employee’s action. I had made a passing reference to teachers removing disruptive students from the classroom and whether this was always the best option. I suggested that a conversation with the students might reveal that others have some responsibility and accountability for what is happening.

Robert rang me on Wednesday afternoon following the meeting. He was delighted with what had happened. What pleased him most was his intuitive sense of the importance of dealing with the employee within the workplace context. He said he began the meeting by acknowledging that he had read all the documentation and that there was sufficient evidence to prove that Joshua was grossly negligent. He went on to say however, that he needed to understand how this incident had happened and to ask what implications this had for workplace safety in the company. He said he produced the restorative card and began questioning John. This went for about 10 minutes during which time he observed that the supervisor and section manager became noticeably uncomfortable.

What the meeting revealed was that workplace safety standards were very poor and that John’s behaviour was just one example of this. Short cuts and a ‘blind eye’ were characteristic of what was happening. Systems and structures had broken down. Robert explained that not only had the conversation changed in the meeting but he had shifted his focus from what John had done to how the supervisors and managers had failed the accountability test. Robert asked if I would send him two boxes of restorative cards. He couldn’t be happier!

This incident again highlights the importance of finding out what is behind the behaviour, in this case, John’s practice. Behaviour simply doesn’t happen in isolation and as previously explained, it normally involves an emotional trigger. Making sense of behaviour can at times be difficult, but using the restorative questions often helps with uncovering and understanding what is really happening.