Last week Lehigh Valley News reported on the IIRP's 15th World Conference. They focused on Steve Korr's plenary and related his talk to implementation of restorative practices in two Lehigh Valley School Districts, Allentown and Bethlehem. They quoted Korr below: 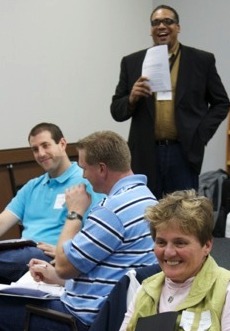 "What we do is not an add-on to teaching," Steve Korr, a trainer and consultant for the International Institute of Restorative Practices, said during a school-change seminar at the conference held at Hotel Bethlehem. "It's not an additional method. It has to be a part of the teaching."

Korr and the institute credit the restorative practices approach for improved student behavior and performance.

During the three-day conference, Korr drew on examples from Bethlehem schools, including how staff handled students who pulled end-of-year pranks. He said the students expressed remorse, apologized, performed community service and addressed classmates on decision-making to be allowed to walk at graduation.

"When you give students the real opportunities to be truly engaged, to be a part of decision making, they rise to the level of expectations," said Korr, a former counselor and school administrator.

The full piece can be found here.

Korr's talk was submitted as a paper co-written with Laura Mirsky entitled "IIRP's Whole School Change through Restorative Practices." Here are a few more selections from that paper:

In the beginning of the change process, all the talk is about kids. But when the process is really underway, it becomes about adults. Changing adults is much more challenging.

For adults to make changes requires a unity of vision from the top. You can’t delegate vision. Wherever the buck stops, that’s who needs to take full responsibility for behavior and climate change. With restorative practices, unlike with other programs, you can’t just “plug it in.”

You need to have “fearless positive regard” for kids, even the ones who habitually misbehave and cause the most serious problems. And you have to believe the same thing of staff, in terms of their potential for change.

On kids driving the process:

Dr. Plum talked about a recent incident when students were in a principal’s office working out issues they’d been having in class with each other. Suddenly, said Plum, “The principal said, ‘Wait, this sounds like something you could solve in your classroom with your teacher.’” The students said that they’d tried that, telling the teacher, “We want to have a circle,” but that he had told them, “Not now. We don’t have time for this; maybe later.” So the kids had gone to the principal instead.

Korr and Mirsky's full paper can be found here.

At times Korr diverged from his prepared speech. At one point he said, "You can't get rid of all the bad students. These are our students. This is our community. They are us."

He also discussed the need to ask the question, among staff, "Why, or how, was that interaction with students restorative?"

Usually restorative practitioners implore people to not ask "why" – as in, "why did you do that?" But I think there's a subtle difference here. Korr is suggesting that practitioners – teachers in this case – explore why a certain action was restorative, or how it could be made restorative.

In a future entry about the World Conference I'll discuss Terry O'Connell's argument about the need for what he calls "explicit practices," the need to be clear about what one is trying to achieve and question one's actions to ensure they are leading toward one's goals. I think this aspect of Korr's talk reinforces O'Connell's idea. Asking "Why do we do what we do?" or "How was that action restorative?" brings to light the principles of restorative practices and makes them explicit. In this way staff can learn from one another to be more consistently restorative.