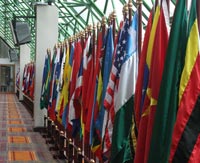 Flags from many nations stand outside the U.N. Crime Congress plenary hall.Restorative justice is playing an increasingly significant role in countries all over the globe, and its influence will likely continue to grow. That message emerged clearly-and in many languages-when people from around the world gathered for the Eleventh United Nations Congress on Crime Prevention and Criminal Justice, held April 18-25, 2005, in Bangkok, Thailand.

The congress established a “new high-water mark” for restorative justice on the U.N. stage, said IIRP Director of Research Paul McCold, who participated in the event and witnessed an unprecedented level of interest in restorative practices.

Convened every five years, the Crime Congress brings together governmental and nongovernmental representatives to exchange information and promote best practices in crime prevention and criminal justice. The congress impacts national policies and practices by facilitating collaboration and formulating international guidelines.

This year’s event, “Synergies and Responses: Strategic Alliances in Crime Prevention and Criminal Justice,” drew more than 2,300 attendees, including many ministers of justice and other high-level officials from U.N. member states. Participants tackled a range of criminal justice topics, from organized crime to terrorism, in the congress plenary sessions and workshops, as well as in less formal ancillary sessions conducted by nongovernmental organizations.

Restorative justice had been discussed peripherally at past congresses, but this year it was much more prominent. The appearance of “Enhancing Criminal Justice Reform, Including Restorative Justice,” as one of six official congress workshops “signalled a major change of status in restorative justice among the U.N. and the world communities,” said McCold. “It means that the U.N. is ready to take it seriously.”

Restorative processes, in which offenders and victims participate in repairing the harm caused by crime, can divert offenders from court proceedings and incarceration. Panelist Kent Roach, a professor at the University of Toronto, Canada, stated that restorative justice not only provides an alternative to prosecutions and imprisonment, but also holds offenders accountable in a manner that meets the needs of offenders, victims and the community.

In a prepared statement, presenter Daniel W. Van Ness, of Prison Fellowship International, remarked, “In only 25 years, restorative justice has become a worldwide criminal justice reform dynamic. Well over 80 countries use some form of restorative practice in addressing crime.”

Representatives of numerous countries were eager to talk about their restorative practices at the workshop, reported McCold. The congress provided an opportunity for countries with well-established restorative justice programs, such as Canada, the United Kingdom and the United States, to share their experiences with countries in Africa, Latin American and Asia that are just beginning to implement such programs. “It was used as an opportunity for countries to talk about their journeys,” said McCold, and to share lessons learned. “A lot of places in the world don’t know that there is an alternative to the traditional criminal justice available to them,” he said.

Participants also discussed the importance of adapting restorative models to fit their own cultures. In Thailand, for instance, where restorative justice has recently begun to take hold, the concept is called “harmony for social justice,” a name that facilitates cultural acceptance.

“Every country and every different culture can take the principles and make them their own-and discover their own historical roots that have restorative principles at their base,” McCold explained.

Although there is some natural resistance to “getting people to think in a new way,” congress attendees were generally supportive of restorative practices. “In the world community, there’s really no concerted opposition to restorative justice, and there never really has been,” said McCold, adding, “It’s pretty hard to argue against giving victims a central role and finding constructive alternatives to punitive policies.”

The congress was the most recent step in the U.N.’s journey, as it has learned about and gradually embraced restorative justice. A significant milestone occurred in 2002 when the U.N. Economic and Social Council adopted a resolution calling upon member states to develop and use restorative practices. “Basic Principles on the Use of Restorative Justice Programs in Criminal Matters,” a document developed over several years in consultation with restorative justice experts around the world, was later appended to that resolution.

The development of these standards and the prominence of restorative justice at the congress are due largely to the efforts of the Working Party on Restorative Justice, with support from U.N. member states such as Canada and Italy. Formed by the New York Alliance of NGOs on Crime Prevention and Criminal Justice, a coalition of major nongovernmental organizations that serve as consultants to the United Nations, the Working Party includes McCold and other restorative justice experts from around the world.

Restorative justice is fundamentally compatible with the mission of the United Nations, he noted, and has already proven successful in U.N. peacebuilding missions such as that in East Timor.

“People who really understand restorative justice quickly understand the implications for things like massacres and genocide, and the aftermath of military occupation,” he said. “In the aftermath of those events, there needs to be something beyond traditional punishment…there needs to be healing.” Traditionally, said McCold, the United Nations has not considered that need. “After the peace accords are signed and they’ve gotten the armies to stop fighting each other, how do people stop hating each other?” The answer to that question, he contends, must come from a grassroots, community effort that brings together the people who have suffered with those who have caused the suffering.

That will not happen easily or quickly, McCold knows. “Restorative justice involves changing some very fundamental things, and it speaks to the core elements of our way of thinking and interacting with each other,” he said. “Because it’s so fundamental, it’s going to take time.”

McCold predicts that restorative justice will be on the agenda of future U.N. congresses, saying, “It’s the only viable reform direction now for the justice system.” This year’s Crime Congress demonstrated “continued momentum for restorative justice-the sense that this is the going trend and people need to get on this bandwagon.” The next 25 years, McCold believes, will bring “major changes in the way most of the world does justice.”

For more information on the U.N. Crime Congress, see www.un.org/events/11thcongress/.