Restorative Conferencing in Thailand: A Resounding Success with Juvenile Crime 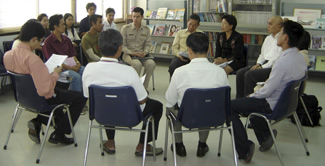 A family and community group conference (FCGC) in Thailand.For Thailand, restorative practices have provided a culturally relevant means of dealing with criminal offenders, especially juveniles. Over the past several years, the Thais have developed a restorative conferencing model that they have used in thousands of cases, with highly encouraging results.

Spearheading the restorative justice initiative is Wanchai Roujanavong, director general of Thailand’s Department of Corrections. He attributes the success of Thailand’s restorative venture in part to its cultural fit. “Thais are a very compromising people,” he said. “They want to live in harmony.”

Roujanavong and his colleagues developed a system called family and community group conferencing (FCGC). Based partly on the IIRP’s restorative conferencing model, it involves the victim, the offender and his or her family and members of the community in a conference in which participants discuss how they were affected by the incident in question and make an agreement to repair the harm. In most cases, conferences are used in place of court prosecution.

Since 2003, the 52 juvenile protection centers run by Thailand’s Department of Juvenile Observation and Protection have conducted more than 19,000 conferences. Of offenders who participated in conferences, less than 4 percent have reoffended, compared to the reoffense rate of 15 to 19 percent for juvenile offenders prosecuted in court.

IIRP founding president Ted Wachtel, who traveled to Bangkok in 2003 to provide training, is impressed by the program’s speed and scope. “Thailand is a leader in Asia, clearly. They did what they said they were going to do, on a scale that no one else anywhere that I know of has done.”

When Thailand began to implement restorative practices it was returning to its historical tradition, said Roujanavong. Prior to the 19th century modernization of the Thai legal system based on Western models, Thais sought authorities only in cases of serious crimes such as murder. For minor transgressions, they consulted informal mediation committees led by village elders. “In our culture, we always settled disputes among ourselves.”

Roujanavong came across a pamphlet on family group conferencing on a trip to New Zealand in 2000. It described a process in which the offender and his or her family meet with the victim, a police representative and a facilitator to discuss the transgression and come up with reparations. “When I read it, I thought, this is not different from the traditional practice in Thailand,” he said. “I thought it might be possible to introduce it in Thailand.”

He set out to do that, organizing seminars and meetings to introduce the concept to the public. Because the term “restorative justice” does not translate well into Thai, it was renamed Yutitham Samarn-chan – literally, “justice for social harmony,” which was well received by the Thai public. It is also sometimes referred to as “retroactive justice.”

The process was further developed when the Thais sought the guidance of the IIRP. Roujanavong met Wachtel in 2003 at an IIRP conference, after which Wachtel conducted a seminar in Bangkok for about 250 people, including judges and prosecutors. IIRP founding faculty members Dr. Paul McCold and Beth Rodman traveled to Bangkok in 2004, first to train a group of about 60 juvenile probation officers as conference facilitators, then to conduct a “training of trainers” for a small select group. The Thais further refined their FCGC model to largely follow the IIRP conferencing format (see RealJustice.org).

Conferences are arranged by the directors of Thailand’s juvenile protection centers, where offenders are sent when they are arrested. A pre-existing law, which gives center directors discretion to request non-prosecution orders for juveniles, supports the diversion of offenders from court to conferences, though it was not designed for that purpose. For a case to be eligible for conferencing, it must be the youth’s first offense; the offender must plead guilty and want to repair the harm he has caused; and the victim must consent to the conference. Non-prosecution orders are limited to offenses punishable by no more than five years’ imprisonment; however, since judges expressed an interest in using the process to make decisions about juvenile court cases, conferences have been used for a number of cases with potential sentences of more than five years.

FCGC was introduced as a pilot project, then was implemented across the country. While center directors were initially hesitant to try the process, it quickly caught on. “FCGC has become one of the routine activities of all the protection centers,” said Roujanavong, who was director general of the Department of Juvenile Observation and Protection during the program’s implementation.

Typical conference participants include the victim, the offender and his or her family, one or more members of the community, a psychologist, a social worker, the protection center director, the police investigator, a prosecutor and the conference facilitator. In addition to discussing the offense and its impact, participants come up with a plan for repairing the harm; agreements might include the offender working for the victim or arranging monetary repayment. As part of the agreement, the offender must assent to being under the guidance of a social worker, with whom he or she meets regularly, for one to two years. Offenders who commit another offense do not get another chance for a conference.

Roujanavong views conferences as an excellent opportunity for youths and their parents to openly discuss problems, for victims to express themselves, and for members of the public to support families in solving problems that affect the whole community.

The system offers many benefits over conventional criminal justice. “It creates more harmony than the criminal justice process,” Roujanavong said. “Accusing each other encourages conflict to be more serious. Retroactive justice focuses on harmony and the need of the victim to repair harm.” Conferences also have reduced the number of cases in court – a relief for an overburdened court system – and are less expensive than conventional justice. Restorative conferencing is endorsed by the country’s prime minister, Roujanavong noted, as it supports government goals of reducing court backlogs and criminal justice costs, as well as enhancing social harmony.

Restorative justice also provides young offenders with a second chance, Roujanavong believes, by allowing them to feel “that they are still clean.” He reasons that a youth who enters the court system might be labeled a criminal – and think of himself as such – while one who participates in a restorative conference is likely to emerge with a more positive self-image.

An evaluation of the restorative conferencing program by Thailand’s Sukothai University gave the process positive ratings: Both offenders and victims reported that they found the process useful and were satisfied with the conference results. In addition, more than 94 percent of police, prosecutors, judges, parents of offenders and community leaders interviewed said they supported the use of FCGC in the juvenile justice system.

Given the success of restorative conferences with juvenile offenders, Roujanavong plans to greatly expand Thailand’s restorative initiatives. He is working with the Ministry of Education to implement restorative practices throughout the Thai educational system. A few schools have already begun restorative conferencing programs on their own to resolve conflicts and disciplinary problems, with positive results.

Working with the Ministry of Justice, Roujanavong also hopes to expand the use of conferencing with adult offenders, which has occurred on a more limited basis than with juveniles. Conferencing with adults was initiated by Dr. Kittipong Kittiyarak, former director general of the Department of Probation, now deputy permanent secretary of the Ministry of Justice. Since 2004, probation offices have used restorative conferencing with more than 7,600 adults who committed minor offenses, reaching agreements for reparation of harm in more than 6,500 cases. Unlike in the juvenile system, however, existing laws do not adequately support the use of conferences as an alternative to court – a situation that Roujanavong and his colleagues are working to change. Roujanavong also notes that the Thai public is less supportive of restorative practices for adults than for juveniles. With time, however, he anticipates that the public will come to more fully appreciate the benefits of the approach.

Roujanavong believes that the keys to Thailand’s success in implementing restorative practices are its development of a customized model that suits its purpose and culture, as well as its roots in community-based conflict resolution.

He knows that many other countries once practiced traditional forms of justice similar to Thailand’s and believes that they, too, could benefit from returning to tradition in the form of restorative practices. “When I saw it for the first time, I didn’t think it was a new process at all,” he recalls. “I had a strong confidence that we could bring back the good old days.”