David Karp, a professor of sociology at Skidmore College, recently wrote an op-ed piece for the Albany, New York, Times Union arguing for broader use of restorative justice. Here are several anecdotes used to illustrate the point: 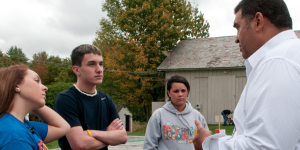 Photo by J. C. Rice from the New York Daily News shows several teens talking to Holloway before helping clean his houseOn Labor Day weekend, a large group of teenagers held an unauthorized party at the Rensselaer County vacation home of ex-NFL player Brian Holloway. Pictures from the party and accusations by Holloway that it caused $20,000 in damage have caused a media sensation. So far, six teenagers have been arrested. As the victim of an alleged crime, Holloway is understandably angry, and many of the teenagers and their parents are anxious about potential criminal consequences. Rather than resolving this in court, using a restorative justice approach may be the best solution.

In Vermont, where restorative justice programs operate throughout the state, some teenagers vandalized a series of mailboxes (the classic drive-by with a bat). One of those mailboxes had been hand-built by an elderly man and given as a gift to his wife. It was the last gift he gave her before he died, and she discovered it in pieces on the first anniversary of his death.

In the restorative justice dialogue with the teenagers, she was able to explain the importance of that mailbox, enabling them to fully understand the material and emotional consequences of their misbehavior.

In Pennsylvania, six teenagers burned down a historic covered bridge, a great loss to the community.

A restorative justice dialogue was held with the remorseful teenagers, their disappointed and worried parents, and angry, mystified community members.

Those youths got to hear directly from the community about the harm they caused the residents, and out of that discussion came greater understanding of who these youths were, why they burned the bridge, and their contrition and willingness to make amends.

Together the parties created an agreement about the best course of action, and this was used to inform the court's ultimate decision. A similar process could be offered in the Rensselaer County situation and others like it that have captured the attention of the community.

The last anecdote refers to a crime and conference shown in the film Burning Bridges.