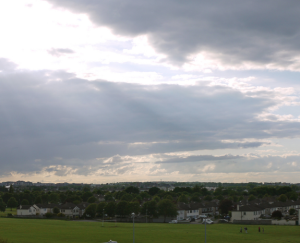 "Evening sky over Tallaght, Dublin" by pc-world at Flickr Creative CommonsThe Irish Independent reports on a restorative practices program in Tallaght, a large neighborhood in Dublin, Ireland. In addition to having trained teachers in schools, the program also involves youth workers, local authorities and members of the community and has been carried out by the Childhood Development Initiative (CDI).

According to the piece, "A survey found six out of ten people in the community said relationships were better between service providers and users, 47% reported improvements with work colleagues, and 14% said they got on better with neighbours."

The article features John Lonergan, the former governor of Dublin's Mountjoy Prison. He is quoted as saying:

"Relationships and inter-community relationships are at the very heart of the quality of life that people have[.] ...

"Unless we have the skills and the knowledge to deal with them, then you are going to have the consequences which are confrontation, aggression, violence and all the other negatives that arise if they are not dealt with.

Read the entire article from the Independent here.

The Child and Family Research Centre at the National University of Ireland, Galway, has also issued an extensive report on the program's implementation titled "Evaluation of the Restorative Practice Programme of the Childhood Development Initiative. The report examines the implementation, pre- and post-training surveys, and makes suggestions for continued implementation. The report notes improved results within schools, youth services, for parents and within communities. Interestingly, "Many of those interviewed as part of this study believed that RP training contributed to community-building and collaboration across agencies. Participants noted the benefit to interagency work of having a ‘shared language’ with which to work." (p. 42)

A section titled "Main Conclusions" on page 56 states the following:

The findings demonstrate the effectiveness of the RP Programme for the management of conflict in Tallaght West. There were improvements in people’s ability to deal with conflict in work/school, in the home, in the community and in interagency settings. The findings also demonstrate the need for an effective approach in Tallaght West to manage conflict situations. While conflict was most frequently experienced in work/school and in the home, people believed their capacity to cope with conflict was poorest in the community and in an interagency setting.

The programme had a positive impact on the use of RP, in particular in work, school and youth services, but also in the home. RP skills were not used as frequently in other settings, in particular in the neighbourhood/community and in an interagency setting.