In the News: Bruce Schenk of IIRP Canada

I'm pleased to reprint this article by Ben Ingram about a presentation given at a school by Bruce Schenk, director of IIRP Canada. 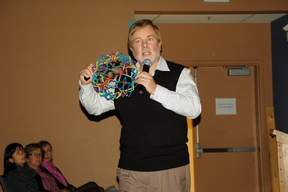 Bruce Schenk uses a Hoberman sphere to illustrate the benefit of helping offenders to feel apologetic instead of threatened, to learn from their actions and not only be punished for them. Photo by Ben IngramA Nov. 10 presentation at Chatelech Secondary School in Sechelt discussed the benefits of adopting a restorative approach to conflict resolution in both the community and its schools.

The idea behind restorative justice is to bring together offenders and those affected by their actions in a healing environment in favour of a punitive one. Proponents say the method can strengthen the community as a whole.

As a director for the International Institute for Restorative Practices, Bruce Schenk said he’d seen the impacts of the approach and its growing popularity.

“I want you to realize this is not something happening in just a few places, but it’s really beginning to happen all over the world,” Schenk said to an audience that included politicians, police and educators. “People are really looking for ways to create a more connected community.”

It’s a way of thinking that’s made its way into School District No. 46 through co-operation with the Sunshine Coast RCMP.

Instead of isolating young offenders and punishing them for their crimes, a community forum can be held to discuss the impact of an offence, identify ways to repair the harm and even restore the relationship between those involved.

People like Schenk believe this approach is not only healthier for the community, but also more successful than traditional punishments in preventing future crimes.

“Increasingly evidence is showing that the more connected communities are … the safer they are,” Schenk said. “Most of what we do works.”

In his discussion of a restorative framework, Schenk was quick to remind the audience that these types of approaches must be tailored to the needs of their respective communities.

Through decades working with young offenders and as a policy analyst for Ontario’s Ministry of Children and Youth Services, Schenk said he found the sometimes threatening nature of the justice system to be a barrier to positive change.

“Learning is impeded by threat,” he argued while asking the audience to think about society’s usual response to a person’s wrongdoing.

Instead, a community justice forum can bring everyone involved together to tell their sides of the story. Collectively the participants decide on an appropriate course of action to repair the damage.

Signed agreements can include apologies, volunteer work, payment of money or a promise of peace — anything that allows the issue to be put to rest in a positive way.

The negative effects of crime often radiate outward from those directly involved, affecting families, friends and communities as a whole. The restorative approach hopes to stop that, he said.

“No matter what the community is, we need to take relationships seriously,” he said. “We need to put energy into building and strengthening relationships, that’s the foundation of this.”

More information on the Community Justice Program of the Sunshine Coast can be obtained from the RCMP’s website at http://sunshinecoast.rcmp.ca or by contacting the organization at 604-885-2266.

Here's the link to the original story: A different approach to crime | Local News | Coast Reporter, Sunshine Coast, BC.