"I came here to cuss you out!" but admin. shows he cares 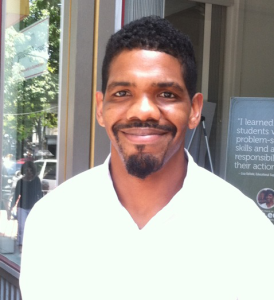 Educational associate Harik Cofer didn’t “buy into” restorative practices at first. “Why would I do that fluffy stuff?” In his position — similar to middle school assistant principal — at National Academy Foundation School, in Baltimore, he was focused on closing the achievement gap through curriculum and academics. “Little did I know that if I did the community building first I could exceed expectations.”

Cofer says his school is probably one of the better educational institutions in Baltimore City, but there are still plenty of problems. In particular, he laments the loss of feelings of pride and community kids used to have about school.

But Cofer found renewed hope the day IIRP instructor and consultant Steve Korr entered “one of the most out-of-control classrooms in the building.” Korr moved the students into a circle and quickly engaged them in a discussion. To Cofer’s surprise, the kids behaved civilly. In the course of the discussion, they started to understand that they themselves were responsible for the behavior in their class. What’s more, they eagerly brainstormed solutions for organizing the class and making it their own.

“That was a class that was literally chaos,” said Cofer. “But Steve said that kids inherently like order, not chaos. Before he went into that class I would have disagreed. When I saw what he did, I thought, ‘Maybe he’s right.’ ”

Soon thereafter, Cofer began to employ restorative questions in his disciplinary role with students, and their parents, as well. The questions – including “What happened?” “What were you thinking?” “What have you thought about since then?” “Who do you think has been affected” and “What can you do to make this right?” – help people process an incident without getting defensive and facilitate reaching a resolution. The results were immediate.

Cofer first used the questions to handle a very tough situation. A girl was creating constant problems: She sneaked out of school by a side door on a regular basis, skipped her last period class regularly, talked back to teachers, walked the halls during class and frequently used profanity. In the presenting problem, the girl enticed another girl into the bathroom to be attacked by three other girls, then insisted she was blameless.

He was already having trouble communicating with the girl’s parents, but Cofer knew a parent meeting was called for. Unbeknownst to him, the girl’s father had just narrowly escaped death while in prison, and when her mother came to the meeting she was angry and belligerent. Determined to change the tenor of the encounter, instead of greeting mother and daughter with the usual lecture and set of punishments, he presented them with his new restorative questions card. 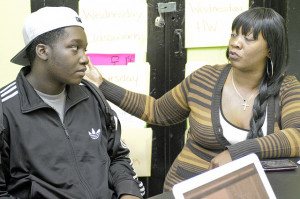 Photo by Innovation_School at Flickr Creative CommonsThe questions opened up discussion in a way Cofer’s old methods never had, and the meeting lasted more than two hours. At first the girl tried to deny responsibility, but the restorative questions helped her mother support Cofer in holding her accountable for her behavior. In the end, the girl’s mother exclaimed loudly, so others could hear, “I came here to cuss you out. But now I see that you really do care!” The girl’s behavior improved, and she hasn’t demanded nearly so much negative attention from Cofer.

Since then, Cofer has been engaging all parents and kids with the restorative questions and really listening to the answers he receives. He has noticed that parents, even those he really battled with last year, have become more positive in their responses. “I’m forming better partnerships with parents,” he says. “I’m becoming an ally instead of an adversary.”

Cofer says that the “Compass of Shame” has really helped him understand and communicate with students and parents. The Compass demonstrates that a wide range of responses can result from the experience of shame. Parents often feel shame when confronted with their children’s poor behavior. “The Compass of Shame changed how I viewed when parents avoided and started to blame,” he says, citing two “poles” on the Compass: “avoidance” and “attack other.” (See Don Nathanson’s Compass of Shame.)

Cofer says this knowledge helped him stay relaxed and command respect while talking softly, rather than shouting and arguing with parents, as he’d been prone to do in the past. “It helped me to be more patient and to understand what parents were going through. I could understand their perspective, how they feel when someone’s calling them about something their child has done wrong.”

Cofer also employs restorative questions to address conflict between teachers. Two teachers were sending argumentative emails back and forth and asked Cofer to step in. It turned out that the crux of the problem was lack of communication between people working in two different school buildings. By answering the restorative questions, the teachers were able to get past their petty disagreement, and everyone recognized that they needed to create a better system for circulating information in a timely manner.

These are all positive developments, but Cofer recognizes that he and his school are just at the beginning of restorative practices implementation. He sees tremendous potential, saying, “I want to learn more about this and make it more a part of my natural being. Restorative practices has changed my view about what I can do and what I can accomplish this coming school year.”

Cofer hopes that teachers in his school will buy into restorative practices. “I believe that by working restoratively, teachers can truly become facilitators in the classroom and kids can take ownership of what they learn.”

He also believes that schools should be a safe place where kids can feel a sense of belonging. “Kids are coming into school with so many things on their minds. Regardless of the turmoil, I want them to know this is a safe place; that we’re a community.”