City of Lima, Peru Launches Program: "Give Back to Your City"

The following story appeared at the City of Lima's web page. The original story in Spanish can be found here. Thanks to Google Translate for translation! 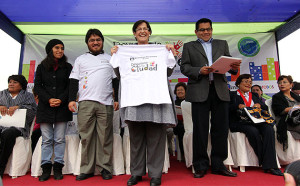 The Metropolitan Municipality of Lima has launched a program called "Give back to your city" in order to resolve conflicts in neighborhoods, emphasizing harmony and peaceful coexistence through healthy and fair treatment between the community and authorities.

This program, which was introduced by the mayor of Lima, Susana Villarán, in the "Plaza of the Fence" in Barrios Altos, seeks to raise public awareness of the importance of using restorative practices as a strategy to improve coexistence and citizen security.

It also involves reducing violence in the community, improving relations between citizens and repairing damage done when it is done through rebuilding, reconciling, reintegrating and living fully in community.

Another objective of this program is to promote environmental stewardship and use of public spaces to create change, to avoid punishment, and instead help to connect people and restore good neighborly relations.

Villarán recalled that restorative practices were part of her platform for municipal government before taking office, in order to prevent violence in the streets.

"For a restorative neighborhood, peaceful and clean, it is not enough to build physical infrastructure. Citizenship is useless if it only means placing a beautiful plaque in a place where there is violence," said the mayor.

She added that reclaiming for the citizenry the Plaza of the Fence in Barrios Altos, the second oldest square in the country, has required the coordinated efforts of the municipality of Lima and neighborhood organizations.

"Now you work for this area, you have peace and respect for the kids who are not in gangs or committing criminal acts, but can grow up in peace," said Villarán.

The mayoral authority has managed the project to include those in other sectors, including the judiciary, prosecutors and neighborhood organizations working with the National Public Safety organization, CONASEC, to develop a safer city.

"Give back to your city" is an initiative of the municipality of Lima, with cooperation of the Offices of Public Safety, Neighborhood Involvement, Education, Culture and Sports, Social Development, and Monitoring and Control, plus neighborhood health centers. Currently the project involves neighbors of Barrios Altos to participate in addressing conflicts, crimes and offenses with a focus on justice and restorative practices.

Director of IIRP Latin America (ILAPR) Jean Schmitz noted that during the speeches the city thanked ILAPR for providing inspiration regarding the use of restorative practices as well as support and orientation for implementing the project.