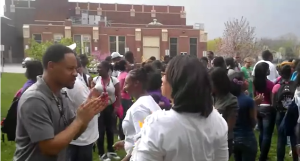 "Fenger used to have a terrible reputation, which reached its nadir a little over three years ago when one of its students, Derrion Albert, was caught in the middle of a gang melee on his way home from school and beaten to death with two-by-fours," writes Koehler. "His murder was caught on a cellphone video and became international news."

But now students are taught skills to handle conflict, alternatives to violence, which are making a huge difference:

While meanness, disrespect, misunderstanding and temper flare-ups are part of life everywhere, in some neighborhoods they can be life-or-death issues. Teaching social skills, empathy, respect and the ability to listen are absolutely crucial. And it can’t be done half-heartedly, said Robert Spicer, Fenger’s Culture and Climate coordinator and the person who facilitates the school’s peer jury program. “Lives are at stake.”

Spicer, writing at the Fenger High School web site, says "I am responsible for the implementation of restorative practices as well as the Well-managed Classroom program. My focus has been build relationships between the teachers and students to create a culture and climate in our school based on peace. Peace can only occur when their is effective communication between staff and students. To this end, we have implemented a wide variety of restorative practices which include victim/offender mediation, family group conferencing and peace circles. We also have a Peer Jury club made of 10th, 11th, and 12th grade students supporting the peace initiatives at Fenger."

Koehler also writes, "This rebuilding wasn’t centered around tighter security, more police, harsher suspensions and zero tolerance. While old-fashioned disciplinary measures are sometimes necessary at the new Fenger, punishment is never the point. The healing practices of restorative justice are now at the school’s core."

You can also read a writeup by Spicer about a restorative circle he facilitated to resolve a conflict involving eight students in the lunchroom. Read "A hand shake, a hug and basketball – Our journey using restorative practices" here.