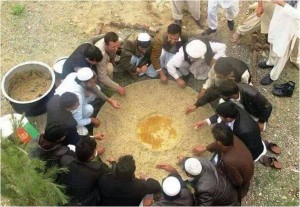 The borderlands of Pakistan and Afghanistan are a dangerous and violent place. But it is here that a student of restorative justice, Ali Gohar, founder of Just Peace Initiatives, based in Peshawar, Pakistan, has worked to reinvigorate and reinvent traditional conflict resolution practices.

In this tribal region, inhabited largely by ethnic Pukhtoon, wrongdoing can spiral into cycles of vengeance. Family feuds can last for generations. For instance, nearly 60 years after the event, a man avenged his father’s murder by in turn killing the original murderer’s grandson. Revenge killings continued back and forth between the two families until a total of a dozen people were dead. Without the intervention of the jirga – a tribal council “organized by wise, respectable, greybeard elders whose decision is unanimous, acceptable to all community members” (Gohar, n.d.) – the cycle of violence would have continued. The jirga sent representatives to each family and convinced them to end the feud “for the sake of God” with no blood money exchanging hands (Lofton, 2015).

The case was by no means unique, but it so happens that one of the families involved was Gohar’s. He says, “I saw the near and dear around me killed. I am hurt myself. I am still in the healing process. I want to heal the wounds of others” (2015).

Since earning a master’s degree in Conflict Transformation from Eastern Mennonite University in Harrisonburg, Virginia, Gohar has recognized the commonality between his people’s experience of jirga and the modern restorative justice movement.

“Like restorative justice, the jirga tradition is about solving a problem through the direct participation of parties on different sides of a crime or conflict and then restoring relationships among those parties through reparations and reconciliation,” write Braithwaite and Gohar (2014, p. 536) in their study, “Restorative Justice, Policing and Insurgency: Learning from Pakistan.”

This study – a component of Braithwaite’s Peacebuilding Compared Project, an in-depth study of 50 former war zones that will track the sustainability of peacebuilding efforts for a generation – takes a hard, honest look at jirga and the muslahathi committees it inspired (more below). 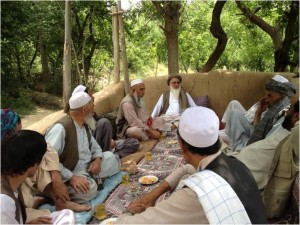 The jirga, while often effective for resolving disputes and curtailing violence, also has its limitations, especially when viewed in light of the concerns of the contemporary international community. The jirga is completely male-dominated and frequently insensitive to women’s rights. It is seen as informal, makeshift and arbitrary when compared to modern courts of law. Plus, decisions are not formalized or written down, and the process can be corrupted by favoritism.

And yet, within the jirga, one can find the seeds of justice. An extraordinary story of a sexual assault that was treated as adultery by a jirga, recounted by Gohar and Braithwaite (2014) and edited slightly, sheds light on both the pitfalls and the potential of the jirga. A Pukhtoon elder recalled:

One day I passed by the village hujra, the tribal community center, where there was a big gathering. After my greeting, I asked what was going on. A man replied that an honor case was being settled by a jirga. A man and woman who had committed adultery were about to be executed.

A man raised a rifle when the girl interrupted and asked for her last will to be expressed. The jirga stopped her, as women are not allowed to speak once they have brought so much shame on the community. Being educated and knowledgeable of the law and rules, I addressed the jirga: “As a guest, I know I have no right to interfere in your decision. However, I intervene because the girl is right by all means: traditionally, religiously and according to law.”

After a lot of argument about my stand, the jirga allowed the girl to speak. I moved to her side and said, “Say what you want; I am with you.”

She requested that, before she speak, a ladder be brought so she could climb to the rooftop of the hujra. This was strange, but I asked that someone bring a ladder and put it against the building. The girl climbed up, and I followed her.

When she reached the top, she raised her full voice and said: “Oh, women, girls of this village, don't cry out if some man wants to take your honor. My fault is that I cried out and called for someone to preserve my honor and safety. Today I will die along with the perpetrator because I cried out for help.”

She then asked me to come back down and told the jirga to kill her. It was so silent you could hear a pin drop.

I opened the discussion again and invited the jirga to look in depth at what the girl had said. The discussion resumed. In the end it was decided that in such a scenario as this, the woman should be left alone while only the man should be killed. That became the law for the rest of the area from then on.

Gohar has used the story to directly address the injustice of “honor killings” and to demonstrate the need for jirgas to be more aware of women’s rights and give voice to women. He also wrote a script that dramatizes the story and has been shown on national television.  (In addition, he has written several other social justice themed dramas: “This brings the issue directly inside the home. It is a discussion starter,” he says.) Gohar adds that when he shows the program during trainings, “men and police officers often cry. ‘We did the same thing; we did wrong,’ they tell me and others trainers, even in Afghanistan where jirga is very strong. They say, ‘This was the first time when we saw things from the woman’s point of view’” (2015).

There are other challenges to jirgas. For instance, in the tribal belt bordering Afghanistan, 700 jirga leaders were assassinated by militants who wanted to consolidate their power. They saw the local jirgas as a threat to their authority and their harsh notion of Sharia law.

In response to these threats, Malik Naveed Khan, then head of the Khyber Pukhtoonkhawa provincial police, who attended a UN training workshop on restorative justice in 2002 in Japan, held a conference of leading Pakistani justice thinkers. Building upon jirga, they developed a “unique hybrid” (p. 542) dubbed muslahathi (“reconciliation”) committees with Gohar and Just Peace Initiatives.

Similar to jirga, muslahathi committees are an informal communal process for responding to a variety of crimes and other complaints, including “business and land conflicts, regulation of gambling, water conflicts, environmental disputes, disputes over roadways, consumer protection matters, and the whole gamut of civil regulatory concerns” (p. 557).

Unlike jirga, women are allowed to serve on muslahathi committees; committees meet in special rooms built within police stations, protected from attack; and outcomes are recorded and documented.

Muslahathi committees have resolved many violent disputes. When a large group from the Swat Valley (which Queen Elizabeth II dubbed “the Switzerland of the East” during a 1961 visit) was displaced to another village, some men housed in the attic of a house were caught peering at women in an adjacent building, invading their privacy. “Violence erupted. Homes were burned down. Muslahathi committee members provided building materials to the Swat Valley [refugees, or more technically "internally displaced persons"] who could not pay to rebuild a house they had destroyed. They also joined the perpetrators in the building work and encouraged community members from all sides to assist” (p. 556).

In another case, “There were two tribes who had a claim over land that was being used by a famous public school. There was a fight over who were the true owners. Ten to 15 people were injured in the battle with six suffering bullet wounds. ... The committee successfully resolved the conflict. The violence between the two tribes has ended and the school [has assurance they can use the land]” (p. 552). 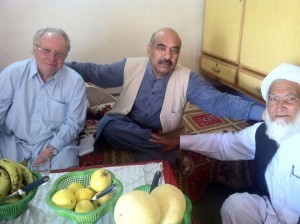 John Braithwaite (left) and Ali Gohar (center) during spring 2013Braithwaite comments, “One of the ways watching Ali at work has changed my thinking is through the realization that restorative prevention of violent crime can be important for the prevention of war" (Braithwaite, 2015).

Amazingly, the benefits of the muslahathi committees have been great despite low financial input. “An impressive thing about muslahathi committees is the volunteerism that at more than 275 police stations has sustained the fruits of a modest donor investment of approximately $90,000 years after it was spent [during the 2008-2010 pilot program]” (p. 558). According to police statistics for Pukhtoonkhawa, in 2012 the committees still managed to resolve 13,699 criminal and 7,314 civil cases (p. 544). “It is a remarkable thing that one of the largest restorative justice programs (restorative justice hybrids) in the world has no public funding apart from the salary of the police officer who attends” (p. 558).

There are still many criticisms of the process, which Braithwaite and Gohar acknowledge. Police may have reason to inflate these numbers, women still are underrepresented in the process and may never lead them, and like any process, it can be corrupted.

But Braithwaite and Gohar also emphasize that local, indigenous practices can help to fill a void where state justice is absent or ineffective and the only alternative is the tyrannical rule of groups like the Taliban, who may be welcomed at first, because they bring a swift if harsh peace, but who then quickly wear out their welcome.

Braithwaite comments, "Ali is a great translator of Pashtun and Islamic philosophy into restorative justice philosophy and practice and vice versa. In the hands of such a deft translator, the healing qualities of these traditions are greatly enriched” (2015).

Gohar concludes, “The world is looking back to the native American circle, to Maori tribes; these practices are spreading so quickly. Criminal justice can just give win/lose solutions, but not so with reconciliation. Reconciliation is with elders, with their wisdom and their knowledge” (2015).

This piece relies heavily upon an excellent study written by John Braithwaite and Ali Gohar (2014), Restorative Justice, Policing and Insurgency: Learning from Pakistan.

Ali Gohar recently received the first Alumni Award from EMU’s Center for Justice and Peacebuilding. In anticipation of that award, Bonnie Price Lofton wrote a profile of Ali Gohar and his work.

Lofton, B. P. (March 5, 2015). Ali Gohar: Seeking to win minds and hearts in Pakistan with a carrot, not a stick. Peacebuilder. Harrisonburg, VA: Eastern Mennonite University’s Center for Justice and Peacebuilding.