Bullying prevention and restorative practices can work together 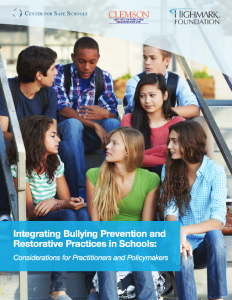 Teachers, parents, students, administrators and the public agree that bullying is a serious problem, both within and outside the school community. Organizations like Olweus Bullying Prevention Program (OBPP) have been working for decades to address this issue.

Now these separate streams are beginning to come together. (As an example, the IIRP is currently planning to convene a symposium of national experts in these fields to discuss possible collaborations, which will be held during the summer of 2015 in Bethlehem, Pennsylvania.)

The October 2014 publication of a White Paper entitled Integrating Bullying Prevention and Restorative Practices in Schools: Considerations for Practitioners and Policymakers (The Center for Safe Schools, Clemson University’s Institute on Family and Neighborhood Life and the Highmark Foundation) suggests ways restorative practices and bullying prevention can be employed in tandem.

“People have been waiting for this kind of guidance for some time,” says Dr. Stacie Molnar-Main, Strategic Initiatives Manager for the Center for Safe Schools, the report’s author. “For the bullying prevention community, the White Paper opens the door to collaborations with restorative practitioners, particularly as it relates to all the preventative aspects and community building work in schools.”

Molnar-Main believes the paper will provide support for pilot projects for people who want to incorporate restorative practices as part of bullying prevention programs.

IIRP Instructor Lee Rush, who was a member of the working group that produced the report, says, “I think the White Paper answers some of the ‘how’ questions. People know ‘why’ we need to address bullying. The paper talks about what people need to know to protect victims, create school policies around bullying and also how are we going to address bullying after the fact when it isn’t prevented.”

OBPP trainers have traditionally warned against bringing together students who are targeted by bullying behavior with those who engage in that behavior. However, restorative practices brings expertise that can help people in schools decide whether, when and how this can be done. Molnar-Main writes:

According to some experts, restorative conferences can be useful in certain cases of suspected school bullying. Amstutz and Mullet note [in The Little Book of Restorative Discipline in Schools, 2005] that face-to-face meetings “are sometimes held to engage all persons affected by the bullying. This is an occasion for all to hear the harm and plan steps to accountability and reintegration. However, persons harmed by bullying or harassment may not wish to face the person who harmed them…fearing further victimization. In these situations, a face-to-face meeting may not be advisable.”

Molnar-Main says that requests for the paper are coming in from across the US.

There are other signs of growing cooperation and communication between those working in bullying prevention and restorative practices. At the International Bullying Prevention Association (IBPA) annual conference in November 2014 in San Diego, California, IIRP Graduate School Lecturer Elizabeth Smull presented a breakout session on “Responding to Bullying with Restorative Practices” that was attended by nearly 100 people. Also, Margaret Thorsborne, Managing Director of Margaret Thorsborne & Associates, based in Queensland, Australia, gave a pre-conference session entitled, “Restorative Practices – Healing the Harm: The Power of Process and Dialogue,” and Dr. Jeffrey Sprague of the University of Oregon presented on integrated models that bring together bullying prevention, restorative practices and positive behavior supports. (Sprague will also be participating in the IIRP’s 1st Presidential Symposium, “Integrating School Climate Reform Efforts,” July 20-21, 2015, in Bethlehem, Pennsylvania.)

Smull, who also works as a coordinator at Community Service Foundation and Buxmont Academy (CSF Buxmont), the IIRP’s model restorative programs for delinquent and at-risk teens, says she felt it was important to be at this conference and provide information about how restorative practices and bullying can work together. “I left with a lot of hope,” says Smull.

In her presentation, Smull focused on the proactive aspects of restorative practices, which help create an environment of healthy communication where bullying is less likely to be a concern. She says, “I don’t believe we have a bullying problem; we have a community problem, a relationships problem. When you build strong community and strong connections, you’ve built the groundwork so that you can deal with things when they go wrong.”

This “front-loading” of the community-building process has helped CSF Buxmont schools to nip bullying in the bud. In one instance, a new student started teasing other students because they were gay. A girl in the school confronted him and said, “No, this isn’t the way we do things here.” She asked the staff to convene a circle of students immediately to address the impact of the behavior as a community. Students spoke out, and the boy’s teasing stopped.

Smull says that when bullying behavior happens at CSF Buxmont, the students involved first meet individually with their counselors, with whom they have strong relationships. The victim of the bullying behavior is asked questions that explore the impact and harm they feel and what they think needs to happen to make things right. The student exhibiting the bullying behavior is asked questions to help them take responsibility and hold them accountable for their behavior. (Learn more about “Restorative questions.”) These individual meetings prepare the students to meet face to face, when appropriate. Before returning to class, students who exhibit bullying behavior have to demonstrate, possibly during a face-to-face meeting, a commitment to changing their behavior in the future.

The details depend upon the situation. A girl who joined a CSF Buxmont school mid-year feared she was the target of bullying by two boys. Her mother told the school she was considering withdrawing her daughter. Staff suggested they would like to give the girl an opportunity to address the problem with the boys. First they had her write a paragraph-long letter to each of the boys, using an affective statement (which expressed her feelings): “When you do thus-and-such, it makes me feel this way...” Staff then encouraged her to speak with the first of the boys and tell him what she had experienced. The boy said he had no idea his words had affected her that way and apologized. Feeling empowered by that conversation, she agreed to meet with the second boy and bring along the first as her social support. He, too, apologized. The girl is feeling better about herself and her withdrawal from school is off the table.

Smull says she was particularly struck by the keynote addresses she heard at the anti-bullying conference: “They were talking about restorative practices, they just didn’t call it that!” she exclaims.

For example, according to Smull, Rosalind Wiseman, author of Queens and Wannabes, and Jeff Duncan-Andrade, a San Francisco State University professor who also works with challenging inner-city high school students in Oakland, California, both emphasized the need to foster healthy relationships and connections among adults and students as a prerequisite for helping kids to grow and thrive in school.

Rush points out that the White Paper is supported by several national experts in both restorative practices and bullying prevention. Lorraine Stutzman Amstutz, co-author of The Little Book of Restorative Discipline in Schools and restorative justice coordinator for the Mennonite Central Committee, Dr. Susan Limber of Clemson University, a researcher and collaborator with Dr. Olweus, and the IIRP’s Dr. John Bailie, associate professor and director of continuing education, reviewed drafts and provided feedback for the final publication.

“A lot of people know they want to employ restorative practices to address bullying,” adds Rush. “The White Paper shows that it can be a best practice.”

Thanks to Kip Suida, coordinator of CSF Buxmont’s Sellersville school, for sharing the two anecdotes about addressing bullying behavior.