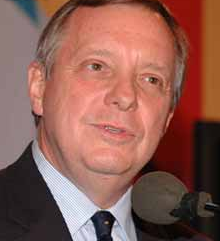 Assistant Majority Leader Dick Durbin (D-IL), Chairman of the Senate Judiciary Subcommittee on the Constitution, Civil Rights and Human Rights, today announced he would hold a hearing on the school-to-prison pipeline next Wednesday, December 12, 2012.

The first-ever Congressional hearing on the matter will investigate the troubling increase in the number of young people sent to the juvenile delinquency system as a result of relatively minor school discipline issues. Since the 1990s, many students nationwide have been pushed out of the classroom and into the courts for relatively minor, non-violent offenses. Once young people enter the criminal justice system, they are more likely to fail in school and commit new crimes, creating increased public safety risks.

This “school-to-prison pipeline” also wastes scarce government resources on ineffective policies and has led to striking racial disparities. Over 70 percent of students in school-related referrals to law enforcement are African-American or Latino. The hearing will explore the problems with the pipeline as well as successful reforms and new initiatives to help end it.

What:     Hearing on the School-to-Prison Pipeline

The Dignity in Schools Campaign writes, "We are pleased to note that Edward Ward of Blocks Together, a DSC member organization, is testifying." DSC calls for people to "Submit comments for the record! Senator Durbin (D, IL), who called the hearing, is asking for parents, students, educators, and advocates to submit written testimony as soon as possible (but not later than 5pm eastern on Monday, Dec. 10th).  Both during and after the hearing, Senators draw on these comments to illustrate why Congress needs to act." DSC says comments can be sent to This email address is being protected from spambots. You need JavaScript enabled to view it. and they offer a form to use which can downloaded here: DSC Statement Template for Senate STPP Hearing. They also suggest those near Washington, D.C. attend the hearing if they can, to show by numbers of people present how important this issue is.

Here is a six-minute video of Edward Ward speaking over a year ago during the 2011 Week of Action on School Pushout. He discusses school pushout as well as the potential of restorative justice to help turn things around.